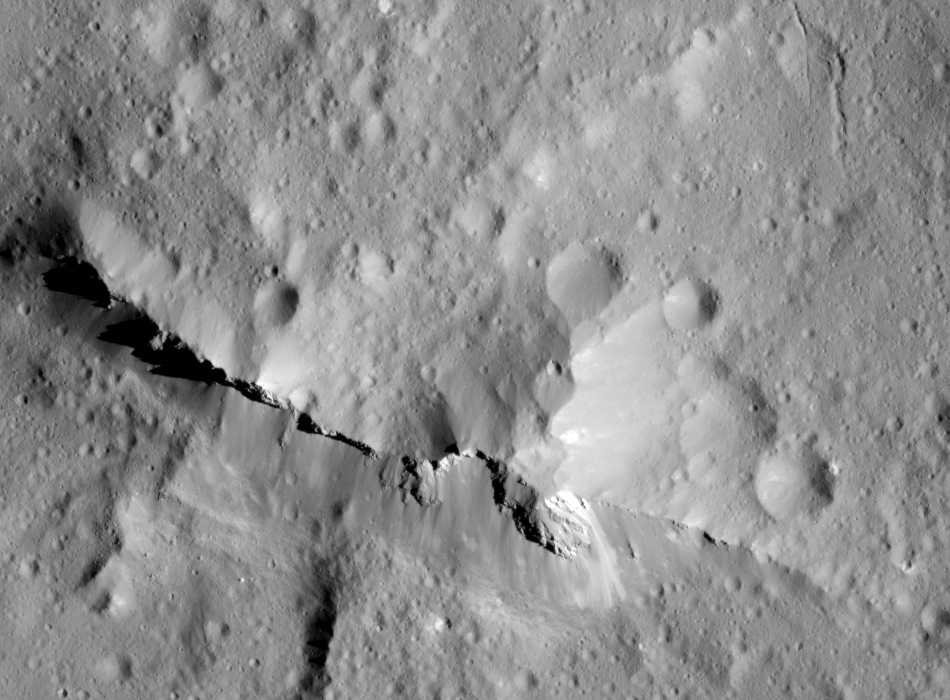 Caption: NASA’s Dawn spacecraft captured this 12.5-mile-across close-up of the central peak of the 99-mile-wide Urvara impact crater on Ceres.  The remarkable 6,500-foot central ridge is made from materials uplifted from depth, arising from terrains enriched with products of rock-water interactions, such as carbonates. Image Credit NASA/JPL-Caltech/UCLA/MPS/DLR/IDA

The surface of the dwarf planet Ceres holds high levels of organic material, according to a new study of images returned by NASA’s Dawn spacecraft. This provides a tantalizing glimpse into the possibility of life throughout our solar system.

Scientists at the Southwest Research Institute (SwRI) published a paper in the journal Nature Astronomy noting the 4.6-billion-year-old dwarf planet, already known to harbor water and volatile compounds, has a chemistry that strongly suggests it formed in a colder environment than its current location in the asteroid belt between Mars and Jupiter.

The presence of ammoniated clays on Ceres’s surface has led some scientists to propose the small world may have formed in the Kuiper Belt beyond the orbits of Neptune and Pluto, where ammonia would have been scattered rather than vaporized by the Sun. An impact by another Kuiper Belt Object (KBO) and/or the gravitational influence of the gas giants could have knocked Ceres into the inner solar system about 500 million years after it formed, some researchers proposed in late 2015.

With water, organics, a thin atmosphere that contains water vapor, and a possible subsurface ocean, Ceres is one of several solar system worlds that could harbor microbial life.

Larger and wetter than any object in the asteroid belt, Ceres has more in common with Pluto and with the icy moons orbiting Jupiter and Saturn than it does with its neighbors. 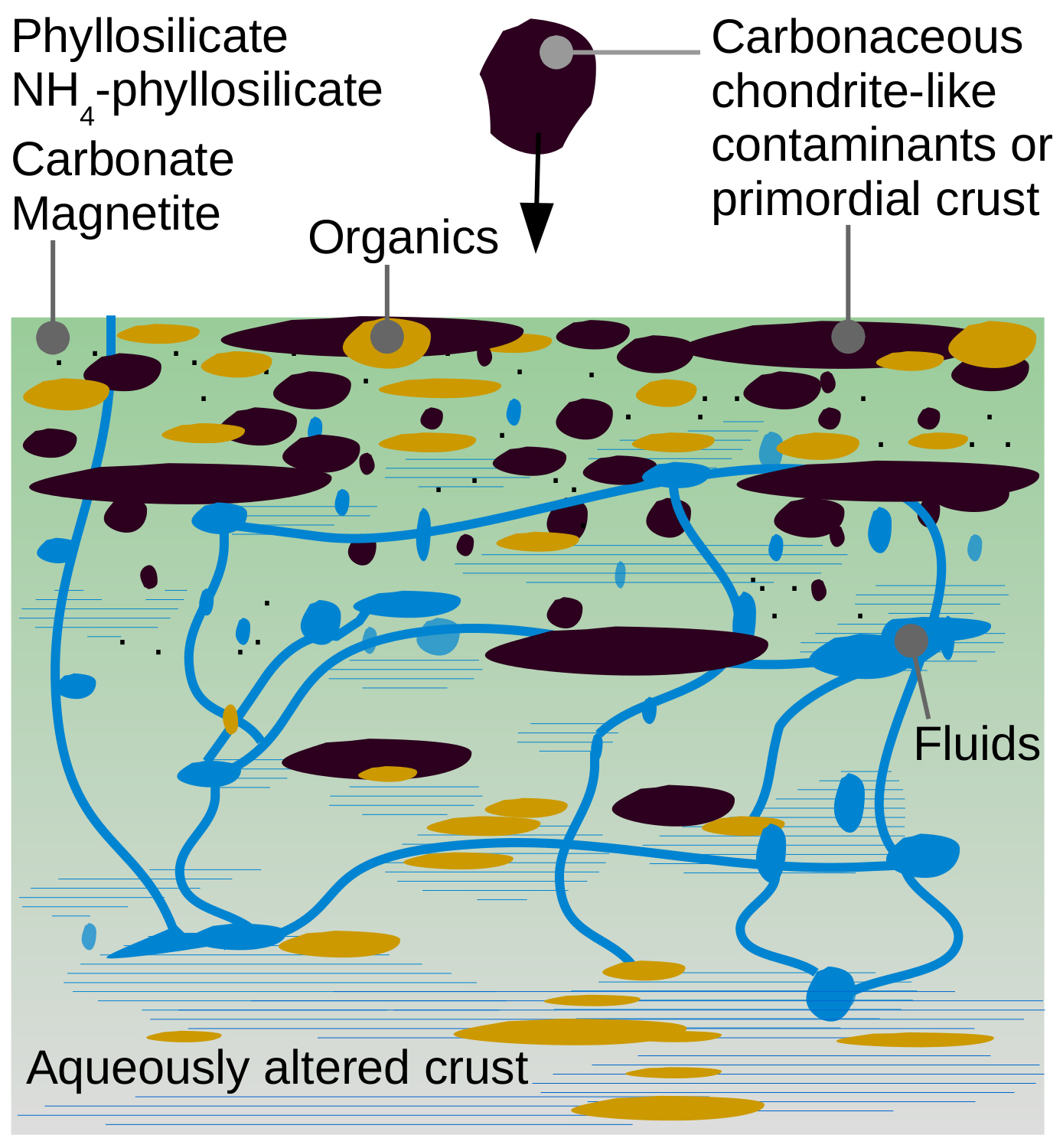 SwRI scientists constructed a possible schematic path for the evolution of Ceres’ upper crust. The figure shows the presence of carbonaceous chondrite-like materials (black) mixed with products of aqueous alteration such as phyllosilicates, carbonates and magnetite, shown in green, and organics, shown in orange. Shaded blue regions indicate water, and blue lines represent conduits for water migration. Organics may have formed in place during aqueous alteration or could have been concentrated by fluids ascending to the upper crust, resulting in the inferred higher-than-chondritic carbon concentration on Ceres’ surface. Over time, the surface gets homogenized by mixing due to collisions and other processes. Image Credit: NASA/JPL-Caltech/UCLA/MPS/DLR/IDA

“Ceres is like a chemical factory. Among the inner solar system bodies, Ceres has a unique mineralogy, which appears to contain up to 20 percent carbon by mass in its near surface. Our analysis shows that carbon-rich compounds are intimately mixed with products of water-rock interactions, such as clays,” said study lead author Simone Marchi of SwRI.

“With these findings, Ceres has gained a pivotal role in assessing the origin, evolution, and distribution of organic species across the inner solar system. One has to wonder about how this world may have driven organic chemistry pathways, and how these processes may have affected the make-up of larger planets like the Earth.”

Ceres’s relatively dark surface was shown by Dawn‘s Visible and Infrared Mapping Spectrometer (VIR) to result from interaction between water and rock, especially phyllosilicates, carbonates, and a type of iron oxide known as magnetite, in its interior. Scientists suspect another dark material, probably amorphous carbon, also contributes to the dwarf planet’s low brightness or albedo. Organic compounds discovered near the 31-mile-wide Ernutet impact crater support the notion that these compounds are likely abundant in Ceres’s subsurface.

Ceres’s surface likely contains several times more carbon than the most carbon-rich primitive meteors found on Earth. Between 50 and 60 percent of the dwarf planet’s upper crust has a composition very close to that of carbonaceous chondrite meteorites, suggesting the carbon-rich material may have been brought by meteors that impacted it.

“Our results imply that either Ceres accreted ultra-rich carbon materials or that carbon was concentrated in its crust,” Marchi emphasized. “Both potential scenarios are important, because Ceres’s mineralogical composition indicates a global-scale event of rock-water alteration, which could provide conditions favorable to organic chemistry.”

“’Our results imply that either Ceres accreted ultra-rich carbon materials or that carbon was concentrated in its crust,’ Marchi emphasized.”

Eventually, carbon mined on Ceres might be used to make super strong and lightweight graphene spacecraft and lots of carbon nanotube fiber to build space elevators for the Earth, Moon, Mars, and many asteroids and far distant moons.

Note:
“Chinese scientists have developed a carbon nanotube fibre they say is strong enough to be used to build a space elevator.”

And, “The super-light, ultra-strong cable required for a space elevator would need tensile strength – to withstand stretching – of no less than 7 gigapascals, according to Nasa. The Tsinghua team says their latest carbon nanotube fibre has tensile strength of 80 gigapascals.”

From: “Chinese scientists say they have the key to building a space elevator. A what?”
By Alice Shen November 23, 2018
At: https://www.scmp.com/news/china/society/article/2173662/chinese-scientists-say-they-have-key-building-space-elevator-what