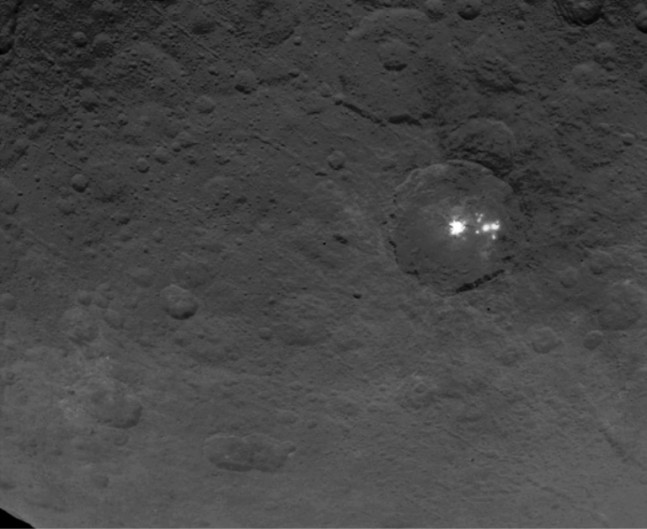 New features are appearing on the surface of the dwarf planet Ceres, each captured by NASA's Dawn spacecraft. Photo Credit: NASA/JPL-Caltech/UCLA/MPS/DLR/IDA

Now that NASA’s Dawn spacecraft is settling into its science mission at Ceres, the mysteries continue to stack up. The bright spots first observed when Dawn was approaching the dwarf planet are becoming even more intriguing as the images become more detailed. The largest bright spot appears to actually have at least eight smaller spots surrounding the larger one. As Dawn dips closer, it will use its onboard spectrometers to look for specific minerals.

These sensors use visible and infrared light to determine the chemical content without actually needing to touch down on the surface. Each mineral reflects light at different wavelengths creating a unique signature. This fingerprint is unique to that specific chemical. Scientists hope the spectrographs coming back will help them determine the composition of the bright spots.

Other exciting discoveries include a mountain that is almost three miles (4.8 km) tall. What makes this mountain unique is its location. Rather than being part of a mountain range, the peak sits on an open plain without any other major surface features nearby. Scientists are puzzled over the formation and are working on theories to its origin. A mountain on the surface of the dwarf planet has captured the attention of scientists studying the tiny world. Photo Credit: NASA/JPL-Caltech/UCLA/MPS/DLR/IDA

Mountain peaks of a different nature appear all over the surface of Ceres. When impact craters are created, the flow of liquid rock sometimes leaves behind a central peak. Ceres contains a large number of these peaks in craters of varying sizes. Additionally, many craters show pits rather than peaks – a feature seen more on icy bodies further out in the Solar System. Ceres appears to have more of these pit-type formations in large craters than was expected.

As the Dawn spacecraft continues to lower its orbit, answers to these mysteries might be revealed. Dawn’s next orbital target is 900 miles (1,450 km) from the surface. The spacecraft should reach that orbit in early August.

History of a “failed” planet

Discovered by astronomer Giuseppe Piazzi in January of 1801, Ceres was originally thought to be a comet, but its movements lead to the conclusion that it must be a planet. Johann Elert Bode first suggested the existence of a planet between Mars and Jupiter in 1772, in the location where Ceres orbits the Sun. Initially, Ceres received planetary status and remained that way for 50 years until it was reclassified as an asteroid based on the discoveries of several similar objects between Mars and Jupiter. In 2006, Ceres became a dwarf planet after the International Astronomical Union (IAU) approved a new method for determining planet status. While Ceres was upgraded using the new criteria, Pluto was demoted from its major planet status. Dawn is the first spacecraft to visit a dwarf planet and the first to orbit two objects in the asteroid belt. Dawn began its journey to Ceres with its launch in 2007 atop a United Launch Alliance Delta II rocket from Cape Canaveral Air Force Station in Florida. The ion-engine powered spacecraft traveled for 5 years before reaching its first target – Vesta.

Dawn then spent 14 months orbiting the protoplanet looking at surface details and taking measurements of the chemical makeup. It completed that mission in 2012 and then was directed by flight controllers to intercept and orbit Ceres.

The Dawn spacecraft with its solar panels extended is over 65 feet (19.7m) long. It uses a Xenon ion engine similar to the one used on the Deep Space 1 probe that visited comet Borrelly. Dawn carries an impressive array of science instruments including Gamma Ray and Neutron Detector (GRaND), Visible and infrared spectrometers (VIR), and a Framing camera (FC) designed to provide 66 meters per pixel resolution.

“The surface of Ceres has revealed many interesting and unique features. For example, icy moons in the outer Solar System have craters with central pits, but on Ceres [the] central pits in large craters are much more common. These and other features will allow us to understand the inner structure of Ceres that we cannot sense directly,” said Carol Raymond, deputy principal investigator for the Dawn mission, based at NASA’s Jet Propulsion Laboratory in Pasadena, California.

Just a hypothesis, but I think that the presence of the larger-than-expected number of central pits in craters would tend to indicate that it’s likely that there is a lot of ice underneath the rocky-looking exterior, and that most likely the bright spots are some of that ice being exposed at the surface.

I believe that the pyramid -or rather the isolated “mountain” on the surface of Ceres-, are most likely extraterrestrial artificial structures. The pyramid and the lights, with the latter being the main find; they appear to be artificial. I.e., sentient beings -the so called aliens- have developed these structures. Many scientists -from what I know- seriously consider that we have finally found intelligent life outside Earth.