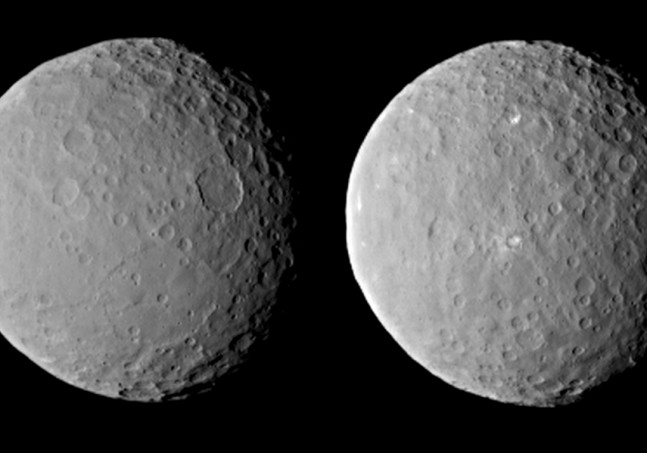 A full range of different crater shapes can be seen at Ceres' surface: from shallow, flattish craters to those with peaks at their centers. Image Credit: NASA/JPL-Caltech

NASA’s Dawn spacecraft is set to insert itself into orbit around the dwarf planet Ceres on March 6, 2015. The enigmatic body has puzzled astronomers since its discovery in 1801. The probe’s latest images, taken from a mere 29,000 miles (46,000 kilometers) from Ceres, reveal that the bright spot first detected in previous images may not be alone. Astronomers do not yet know what these bright spots are.

“Ceres’ bright spot can now be seen to have a companion of lesser brightness, but apparently in the same basin. This may be pointing to a volcano-like origin of the spots, but we will have to wait for better resolution before we can make such geologic interpretations,” said Chris Russell, principal investigator for the Dawn mission, based at the University of California, Los Angeles.

NASA’s Dawn spacecraft launched atop a United Launch Alliance (ULA ) Delta II rocket from Space Launch Complex 17-B at NASA’s Kennedy Space Center on Sept. 27, 2007, kicking off the start of a seven year trek across the Solar System. Its mission: explore the asteroid belt and help unlock the secrets of the early Solar System. Researchers had two targets picked out for the probe — an asteroid named Vesta and a dwarf planet named Ceres.

In order to complete its journey to the asteroid belt, Dawn employed the use of ion propulsion. This technology was originally tested and deemed successful on NASA’s Deep Space 1 mission. However, it has been applied in the design and implementation of a dedicated spacecraft for the first time on this mission. Ceres has not one, but two puzzling bright spots on its surface. Image Credit: NASA/JPL-Caltech

Ion propulsion permits Dawn to venture on a very bold mission, that would be out of reach with traditional propulsion systems. Dawn is equipped with two solar panels, spanning approximately 65 feet (19.7 meters) from tip to tip. The panels collect energy from the Sun, which then ionizes (accelerates the ions) the vehicle’s fuel — xenon — and accelerates the spacecraft.

Using its ion propulsion system, Dawn will enter orbit around Ceres on March 6. Scientists are expecting to receive better and better views of the dwarf planet over the next 16 months, and hope to better understand how Ceres formed and developed over time by studying different features on its surface, like the pair of bright spots.

“The brightest spot continues to be too small to resolve with our camera, but despite its size it is brighter than anything else on Ceres. This is truly unexpected and still a mystery to us,” said Andreas Nathues, lead investigator for the framing camera team at the Max Planck Institute for Solar System Research, Gottingen, Germany.

Dawn’s science payload consists of two cameras, a visible and infrared mapping spectrometer, capable of revealing surface minerals, as well as a gamma ray and neutron spectrometer to categorize the elements that comprise the outer portion of the asteroids. Dawn will also take measurements of the gravity field, and is expected to reveal details of the interiors of both Vesta and Ceres. With the data from these systems, scientists will study surface features and the complex and varied landscapes, gaining valuable new insights into the internal structure of these ancient worlds. What role did size have in determining how planets evolved throughout the Solar System? How did water affect the process of planetary formation? Data gathered during the Dawn mission will help scientists uncover the answers to these and other questions.

This mission has the potential to make many paradigm-shifting discoveries about these two bodies and even how we classify objects in the Solar System. Researchers has already enjoyed unprecedented views and data on Vesta, and are anxious to see what Ceres has in store. Ceres may even have active hydrological processes leading to seasonal polar caps of water frost, altering our understanding of the interior of these bodies.

Be sure to stay tuned to Spaceflight Insider as we continue to cover this mission.