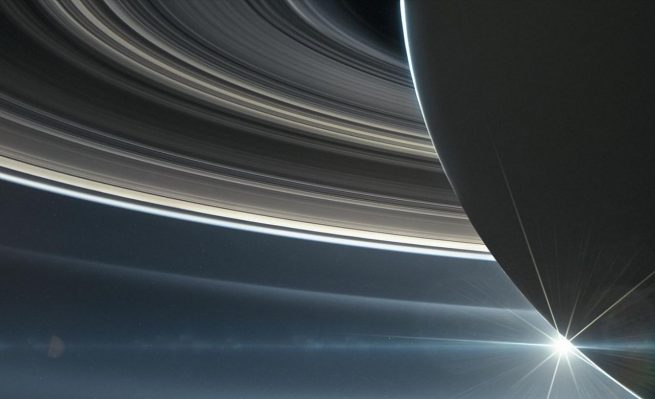 Data collected by the Cassini Saturn orbiter during its final close orbits between the giant planet and its ring system has enabled scientists to accurately calculate Saturn’s rotation rate as well as determine the age of its rings.

Both findings have been published, the first in the Astrophysical Journal and the second in the journal Science.

Saturn’s exact rotation rate, or the length of its day, remained unknown for a long time in spite of data returned by the Voyagers and by Cassini earlier in its mission.

Two factors prolonged the mystery. One is the giant planet’s lack of a solid surface, leaving no specific features scientists could track to determine its rotation rate. The other is Saturn’s magnetic field, which hides its rotation rate because it is aligned exactly with the planet’s rotation axis. 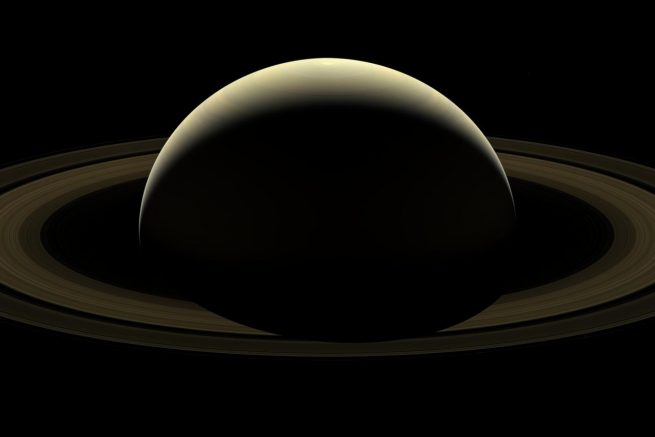 The last full mosaic of Saturn and its rings, taken two days before the spacecraft’s plunge into the planet’s atmosphere. Image Credit: NASA/JPL-Caltech/Space Science Institute

Christopher Mankovich, a graduate student at UC Santa Cruz, studied data collected by Cassini during its close Grand Finale orbits in mid-2017 when its instruments examined the ring particles in detail. By studying wave patterns within the rings, he discovered that the rings act much like a seismometer does on Earth, where it is used to measure movement caused by earthquakes.

Particles within the rings respond to vibrations within Saturn, which are caused by changes in the planet’s gravity field.

Data collected by the Voyagers and earlier Cassini measurements is based solely on measurements of Saturn’s magnetic field, as the probes were too far away to study the ring system up close.

Not far from various estimates made over several decades, Saturn’s rotation rate is now known to be 10 hours, 33 minutes, and 38 seconds. 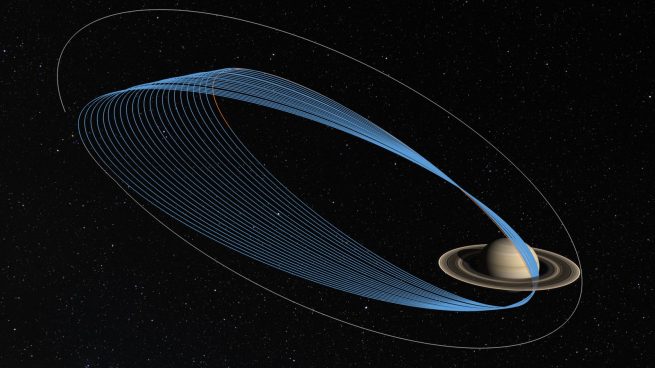 The idea of using the rings to obtain this information was first proposed in 1982, then further discussed in 1990 by Mark Marley of NASA’s Ames Research Center in his 1990 Ph.D. dissertation. Marley worked with Mankovich as a co-author of the most recent study.

Marley’s thesis accurately predicted the locations within the ring system that act as a seismometer and, before Cassini launched, recognized it would be capable of conducting close studies of the rings.

“The researchers used waves in the rings to peer into Saturn’s interior, and out popped this long-sought, fundamental characteristic of the planet,” said Cassini Project Scientist Linda Spilker. “The rings held the answer.”

Cassini’s Grand Finale observations also informed scientists of the ring system’s age, which is surprisingly just 10 million to 100 million years old, much younger than Saturn itself, which formed 4.5 billion years ago.

During the spacecraft’s 22 Grand Finale plunges between the rings and the giant planet, its instruments measured the mass of the material within the rings. While falling into Saturn’s gravity field, Cassini measured the amount of gravity tugging on it by both the planet and the rings and returned information on its velocity and acceleration to Earth through NASA’s Deep Space Network (DSN).

By determining the amount of gravity tugging and accelerating Cassini — measured down to a millimeter per second — scientists successfully calculated the masses of both the planet and the rings. Based on the rings’ mass, researchers then calculated their age.

Luciano Iess of Sapienza University of Rome, who published the Science article, said the rings’ low mass supports the idea of a relatively recent formation. The icy rings are bright, which would not be the case if they were older and had had the time to collect debris and dust.

“Only by getting so close to Saturn in Cassini’s final orbits were we able to gather the measurements to make the new discoveries,” Iess said. “And with this work, Cassini fulfills a fundamental goal of its mission: not only to determine the mass of the rings, but to use the information to refine models and determine the age of the rings.”

Scientists are uncertain as to how Saturn’s rings formed, though some suspect they were created when a comet that came close to Saturn was torn apart by the planet. Others propose a collision that broke up some of the planet’s icy moons.

Cassini’s Grande Finale also revealed that deep within Saturn’s atmosphere, at a depth of approximately 5,600 miles (9,000 kilometers), layers that rotate at different speeds close to the surface do so together in synchrony. Spilker said the depth of the synchronously rotating layers surprised researchers and could yield new information about Saturn’s interior.