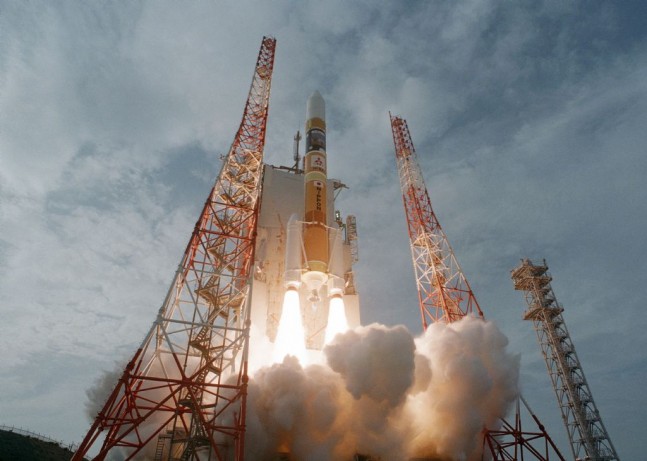 The H-IIA rocket lifts off on a cloudy day for its 17th flight from Tanegashima. Photo Credit: JAXA

Late last night (Wednesday afternoon in Japan) at 11:22 p.m. EST (1:22 p.m. JST), the Japan Aerospace Exploration Agency (JAXA) successfully launched their “Asteroid Explorer” spacecraft, Hayabusa 2. It was launched aboard the Mitsubishi-built H-IIA Launch Vehicle No. 26 out of the Tanegashima Space Center on Tanegashima Island. The spacecraft is now headed to collect samples from the near-Earth asteroid dubbed “1999 JU3.”

Prior to launch there had been two previous delays due to weather with the first cropping up on Friday, Nov. 29 as a freezing layer of clouds were predicted to form over the launch pad during launch day on Nov. 30. JAXA proceeded to announce a no-earlier-than (NET) date of Dec. 1, though it was again postponed until Dec. 3 due to additional weather concerns in the region. Late Saturday night JAXA officials held a go/no go meeting to conclude that strong winds would exceed the launch restrictions for that day. Fairing assembly at a JAXA facility for the Hayabusa 2 spacecraft. Photo Credit: JAXA

At the time of launch it was 61°F with favorable, but cloudy, weather conditions at JAXA’s Yoshinobu Launch Complex (LA-Y) located at the southeast portion of the island. The launch site is strategically placed south of mainland Kyushu and far southwest of Tokyo with the rocket being controlled by the nearby Yoshinobu blockhouse up until liftoff. Along with the H-IIA launch vehicle, the location allows for a wide array of payloads such as geostationary satellites, lunar-orbiting spacecraft, and deep space probes to be inserted into space.

With ignition starting on time at 11:22 p.m. EST (1:22 p.m. JST), the 173 ft (53 m) tall H-IIA Launch Vehicle No. 26 lifted off with Hayabusa 2. The H-IIA rocket is the reliable workhorse of the Japanese space industry, having a success rate similar to that of United Launch Alliance’s (ULA) Atlas V and Arianespace’s Ariane 5. This is the 25th successful mission for the H-IIA that was derived from the earlier H-II variation of the 1990s. The liquid-fueled H-IIA Launch Vehicle No. 26 jettisoned its solid rocket boosters (the SRB-A variant on the H-IIA) at 11:24 p.m. EST (1:24 p.m. JST) as it headed Southeast over the Pacific Ocean. After liftoff, the control of the rocket was taken over by the range control center in Japan. At11:27 p.m. EST (1:27 p.m. JST) the payload fairing separated, followed by the first and second stage separation two minutes later. Spacecraft separation happened then at 1:10 a.m. EST (3:10 p.m. JST) as Hayabusa 2 made its way towards the proper orbit.

Over the course of the next few months, Hayabusa 2 will make its way around our Sun in an orbit similar to that of Earth’s, before passing our planet in Dec. 2015. Between 2015 and 2018 the spacecraft will then enter an orbit close to the 1999 JU3 asteroid, making two more trips around the Sun in this orbit before finally reaching the targeted asteroid in mid-2018.

After samples and data are collected by Hayabusa, MASCOT, and MINERVA II, the trio will depart for Earth in late 2019, making another almost complete pass around the Sun.

Arriving again close to Earth in late 2020, Hayabusa 2 will deploy a small re-entry capsule located on the side of the spacecraft in preparation to return. The capsule is the most important part of the payload on-board which will contain the various samples collected during Hayabusa 2’s stay. This capsule will then reenter the Earth’s atmosphere at 7.5 mi/second (12km/second) before being retrieved. Hayabusa 2 itself won’t return to Earth as the spacecraft will “just stop by at the Earth to deliver the capsule” before returning to deep space.

Unlike the previous re-entry capsule on board the original Hayabusa spacecraft, this new one is equipped with a special device called the Riparian Ecosystem Management Model (REMM), which will monitor the acceleration, movement, and internal temperatures during flight. Hayabusa 2’s mission rides on the success of the first Hayabusa (also known as MUSES-C/Mu Space Engineering Spacecraft C), which means “peregrine falcon” in Japanese. It was launched on May 9, 2003 and rendezvoused with the asteroid Itokawa in mid-Sept. of 2005 before becoming the first spacecraft to return asteroidal material to Earth. Itokawa, an S-type asteroid, is much smaller than the asteroid that Hayabusa 2 will be landing on in 2018.

Although Hayabusa was the first to collect asteroid samples, the two spacecraft now join a constellation of other missions helping us better understand these near-Earth objects. Near Earth Asteroid Rendezvous – Shoemaker (NEAR Shoemaker) spacecraft was the first to make contact with the S-type asteroid, Eros, on February 12, 2001. The NASA/Lockheed Martin spacecraft OSIRIS-REx (Origins Spectral Interpretation Resource Identification Security Regolith Explorer) is also currently being developed to collect samples from the asteroid Bennu.

Stemming from the technologies on-board the original Hayabusa, its successor is equipped with a variety of scientific and mission specific instruments in its payload such as: An artist’s rendition of the MASCOT lander on the surface of the asteroid. Image Credit: DLR/JAXA

The MASCOT (Mobile Asteroid Surface Scout) lander is a collaboration between DLR (German Aerospace Agency) and CNES (National Center for Space Studies) that will broaden the scope of data that can be collected. The 22 lb (10 kg) lander is equipped with a mechanism which allows it to visit up to three different sites on the asteroid, with an internal battery that can keep it operational for up to 12 hours. The German/French-built lander is comprised of four main instruments: Also flying with MASCOT and Hayabusa 2 is the Japanese-built series of rovers, collectively called MINERVA-II. Separated into two capsules, MINERVA-II1 (which contains Rover 1A and Rover1B) and MINERVA-II2 (which contains Rover 2), also plan to explore the asteroid’s surface. As they conduct a thorough search of the asteroid, the small fleet of rovers will “hop” along the surface. These rovers were developed from the original MINERVA rover that failed to deploy onboard Hayabusa in 2005. JAXA has revisited the rover’s design and has implemented new technologies to ensure the success of MINERVA II.

This mission aims to better our understanding of our solar system’s origins and the effects these asteroids may have on our planet. Samples from the C-type asteroid contain carbonaceous chondrites, which are the oldest types of rock pieces found in our solar system. Consisting of organic, hydrated minerals, they could help scientists unlock answers to our solar system.

Asteroids are a potential threat to our planet, which is why agencies like JAXA and NASA have taken an interest in monitoring and exploring these objects. While Hayabusa 2 hopes to aid in a greater understanding of these deep space objects, it also plans to make detailed observations of the 1999 JU3 asteroid in an effort to protect our planet from future threats.

Please check back with SpaceFlight Insider for updates on the Hayabusa 2 mission in the upcoming months.