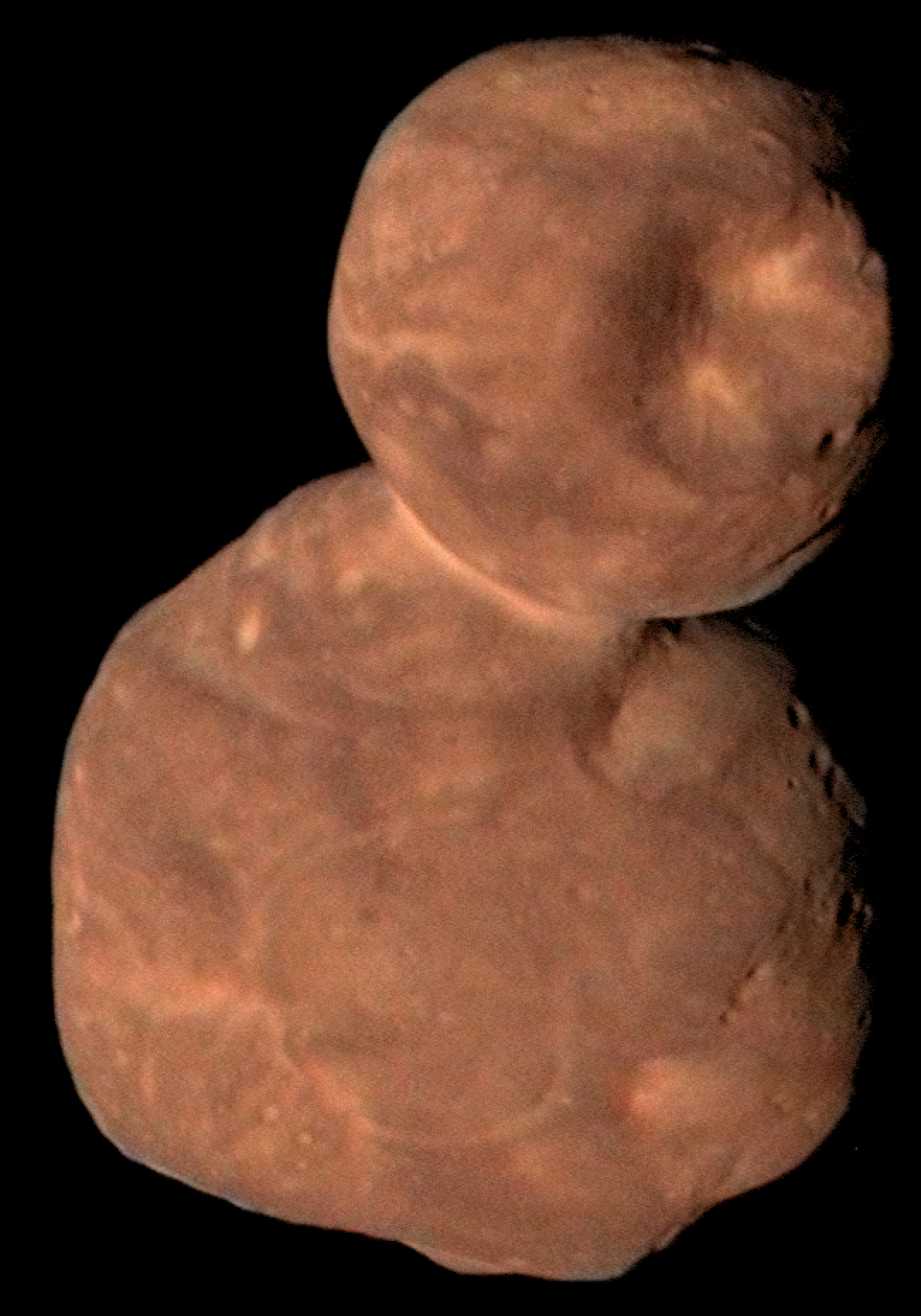 Data returned by NASA’s New Horizons spacecraft taken during its January 2019 flyby of Kuiper Belt Object (KBO) Arrokoth, also known as 2014 MU 69, located four billion miles from Earth, supports the theory that planet formation in the solar system occurred in a gentle rather than violent process.

The mission’s science team presented findings they recently published in three separate papers in the journal Science to the the annual conference of the American Association for the Advancement of Science (AAAS) in Seattle, WA, last week.

Arrokoth, the most distant object ever explored by a spacecraft and New Horizons‘ second target, is composed of two lobes joined together at a narrow “neck.” The lobes have smooth surfaces, are composed of the same materials, and are the same colors. The KBO is approximately 22 miles long.

As soon as the first images of the double-lobed KBO arrived back on Earth, mission scientists turned to computer models to explain Arrokoth’s formation. They recognized its two lobes as having once been two separate objects.

How this merger happened is at the core of a debate between two theories of planet and planetestimal formation. The Sun, planets, and all other solar system objects formed from the gravitational collapse of the solar nebula, a primordial cloud of gas and dust. One theory, known as particle cloud collapse, posits this collapse occurred in a gentle, low-velocity process while the other, known as hierarchical accretion, proposes it occurred through violent, high-speed collisions.

Using early data on Arrokoth returned by New Horizons, the mission’s science team published its first paper on the object in the journal Science last May, in which they noted its two lobes likely formed close to one another and likely orbited one another before they merged.

The three latest papers draw on 10 times the data that went into last year’s study.

“Just as fossils tell us how species evolved on Earth, planetesimals tell us how planets formed in space. Arrokoth looks the way it does not because it formed through violent collisions, but in more of an intricate dance. in which its component objects slowly orbited each other before coming together,” explained mission co-investigator William McKinnon of Washington University in St. Louis and lead author of one of the three new Arrokoth papers just published, which models the lobes’ merger.

Scientists can tell that Arrokoth’s two lobes formed near one another from the fact that they have the same composition and color. This would not be the case if they had come from different regions of the solar nebula and merged in a violent impact.

Both lobes have flattened shapes and equators and poles that are closely aligned. These characteristics serve as additional evidence for a gentle merger. While the KBO has some craters, its surface has remained largely unchanged since the solar system’s planets formed over four billion years ago.

“Arrokoth has the physical features of a body that came together slowly, with ‘local’ materials in the solar nebula. An object like Arrokoth wouldn’t have formed, or look the way it does, in a more chaotic accretion environment, said New Horizons composition theme team lead Will Grundy of the Lowell Observatory in Flagstaff, Arizona.

John Spencer of the Southwest Research Institute (SwRI) in Boulder, Colorado, is lead author of a paper that focuses on the geology and geophysics of the lobes and the alignment of their equators and poles.

Grundy is lead author of the third paper, which notes Arrokoth is very cold, has a red color, and has a surface composition of methanol ice and complex organic materials.

Because it is the most pristine and unchanged object explored by a spacecraft, Arrokoth is giving scientists crucial insights into the process by which planetesimals and planets formed, stated New Horizons principal investigator Alan Stern, also of SwRI Boulder.

“All of the evidence we’ve found points to particle-cloud collapse models, and all but rule out hierarchical accretion for the formation mode of Arrokoth, and by inference, other planetesimals,” Stern said.

The spacecraft will continue to return data from its Arrokoth flyby through September 2020.