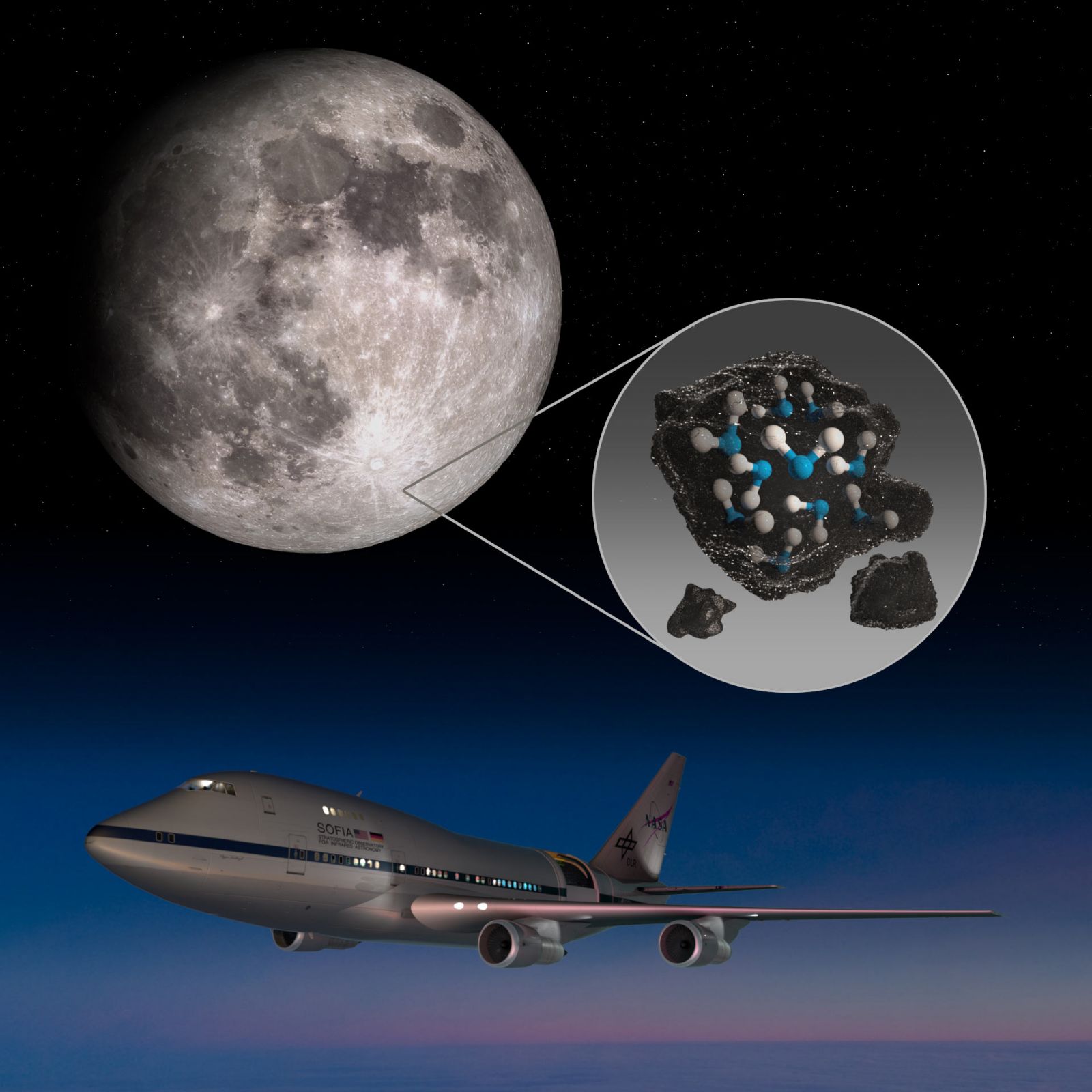 This image depicts the location of Clavius Crater, a rendering of water trapped in lunar soil, and the SOFIA Observatory. Image Credit: NASA

Two Earth-based studies confirm water molecules are present on the Moon, but the amounts vary depending on location and time of day, Casey Honniball of NASA’s Goddard Space Flight Center reported in a Jan. 21 online seminar titled “A Tale of Lunar Water,” sponsored by the Lunar and Planetary Institute (LPI) in Houston, Texas.

These studies were conducted with NASA’s Infrared Telescope Facility (IRTF) and with its Stratospheric Observatory for Infrared Astronomy (SOFIA) airborne observatory.

Lunar samples returned by NASA’s Apollo missions and by the former Soviet Union’s Luna missions contain low levels of volatile elements though a few had high water contents, Honniball said. However, these samples represent only localized areas on the lunar surface and not the whole Moon.

In 2009, three separate probes—India’s Chandrayaan-1 spacecraft, NASA’s Deep Impact spacecraft on its way to study the interior of Comet Tempel 1, and the joint NASA-ESA Cassini spacecraft to Saturn—all unexpectedly revealed hydration features on the Moon’s surface.

Water ice was recently detected in permanently shadowed lunar regions. Significantly, hematite, which requires water to form, was found in sunlit areas at the Moon’s poles.

Honniball used IRTF‘s SpeX instrument, a 0.7 to 5.3 micron medium resolution spectrometer and imager to investigate variations in the levels of water ice present at various times during the lunar daytime on the entirety of the Moon’s near side and at various lunar latitudes.

Impacting micrometeorites generate heat that converts hydroxyl, an entity composed of one hydrogen atom bonded to one oxygen atom (HO), on the Moon’s surface into water.

Lunar water is stored either as ice particles or in glass particles formed when the heat from impacts melts lunar regolith. Melted surface material forms a glass-like structure into which water can be captured.

SOFIA observed the Moon’s surface for the first time in August 2018, focusing on two different locations. It found evidence of water in Clavius Crater, located in the Moon’s southern hemisphere, as well as in some mare at mid-northern latitudes.

Clavius marks the first unambiguous detection  of water on the Moon’s sunlit surface. The region holds an estimated 100 to 400 parts per million of water, Honniball estimated.

During the SOFIA observations, she and her colleagues expected water abundance to increase with latitude, but this did not occur. This phenomenon could be localized and not typical of the Moon as a whole, she explained.

More SOFIA observations will be conducted during the summer of 2021. These are part of a larger project in which SOFIA will map all molecular water on the Moon.

Additional IRTF observation will also be done, with the goal of better understanding of the ways hydroxyl and water behave differently on the lunar surface. Current plans call for observing during the various lunar phases as well as focusing on the polar regions.

Diurnal variations—differences in abundance based on time of day—could indicate there is a source of hydration at the Moon’s poles though it is unclear whether the substance moving is hydroxyl or molecular water, Honniball said.

If lunar water originates in micrometeorite impacts, it should be scattered all over the Moon rather than concentrated in specific locations, she said.

The ultimate goal of all these studies is understanding the source of lunar water, the way the water moves across the Moon’s surface, and whether it is concentrated at specific geologic locations.

The article makes reference to polar caps on the Moon. Either the author is mistaken as the Moon lacks polar caps like Mars and Earth or she was referring to something else that isn’t explained. I heard the talk that her article is based on , but I’ve never heard the water ice that is identified in craters near the poles as “polar caps.” A correction or explanation is in order. Please explain.

Thank you for catching this. The article has been corrected to read “polar regions” rather than polar caps.