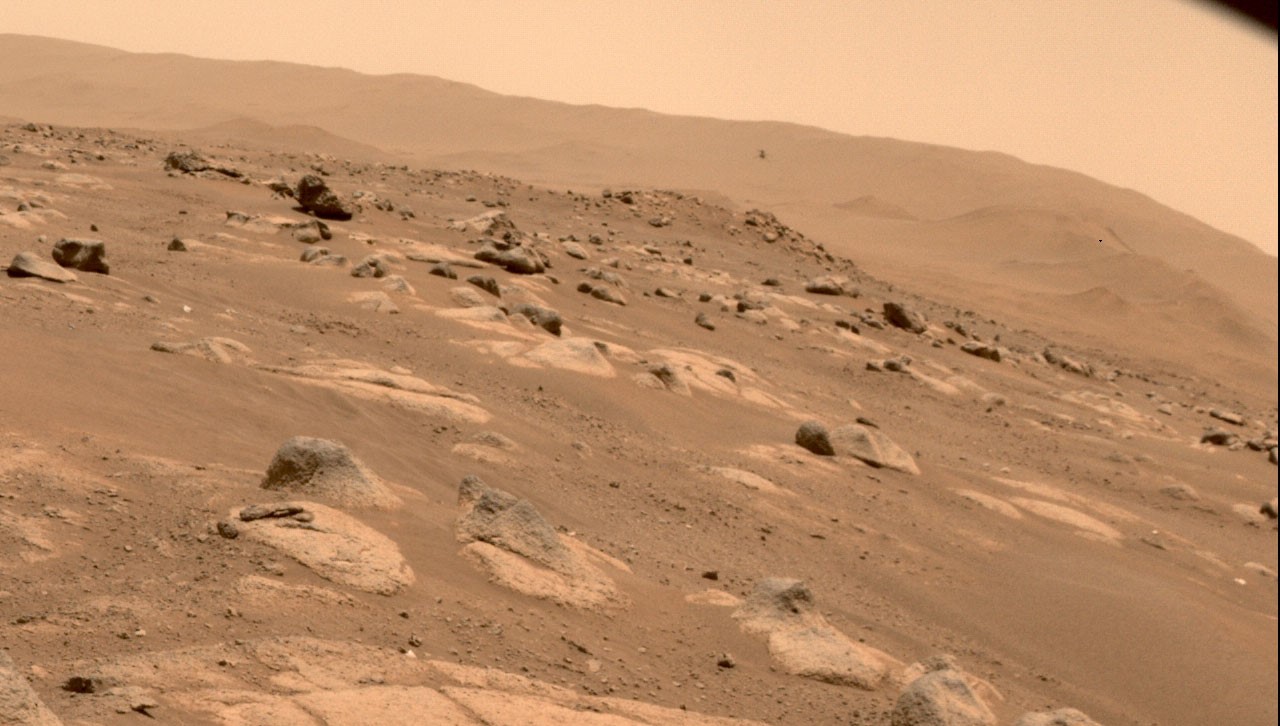 NASA’s Ingenuity Mars Helicopter is viewed by one of the hazard cameras aboard the Perseverance rover during the helicopter’s fourth flight on April 30, 2021. Credit: NASA

NASA’s Ingenuity Mars Helicopter has once again proven itself to be the aeronautic showstopper of 2021 with its fourth flight above the Martian surface, setting the stage for a 30-day “operations demonstration” phase.

The fourth flight of the Ingenuity helicopter took place at 10:46 a.m. EDT (14:46 UTC, 12:30 p.m. local Mars time) April 30, 2021. This was a day later than planned because the device did not transition to flight mode in order for the actual flight to occur.

Engineers at NASA’s Jet Propulsion Laboratory in Pasadena, California, said this was because of a watchdog timer issue identified earlier in April, which an investigation into the vehicle’s software determined there was a 15% chance of this happening each time a flight is attempted. The team found the easiest solution was to just try again a day later. 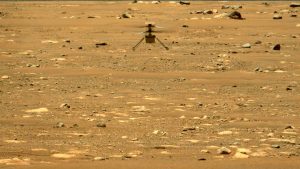 An image of the Ingenuity Mars Helicopter during its second flight on April 22, 2021. The photo was captured by the Perseverance rover, located about 70 meters away. Credit: NASA/JPL-Caltech/MSSS

While the first three flights for Ingenuity were groundbreaking in their own right, the fourth flight highlighted the full capability of the helicopter’s design.

In fact, engineers at JPL said this flight would be the beginning of a transition from the 30-day “technology demonstration” phase to a 30-day “operations demonstration” phase to evaluate how the device, and future designs, can be used for aerial scouting and other functions to benefit future Mars missions, as well as those on other worlds with atmospheres.

“The Ingenuity technology demonstration has been a resounding success,” Thomas Zurbuchen, associate administrator for NASA’s Science Mission Directorate, said in a NASA news release. “Since Ingenuity remains in excellent health, we plan to use it to benefit future aerial platforms while prioritizing and moving forward with the Perseverance rover team’s near-term science goals.”

Before the fourth flight, backup Mars Helicopter pilot Johnny Lam said, “To achieve the distance necessary for this scouting flight, we’re going to break our own Mars records set during flight three. We’re upping the time airborne from 80 seconds to 117, increasing our max airspeed from 2 meters per second to 3.5 (4.5 mph to 8), and more than doubling our total range.”

Indeed, the fourth demonstration of Ingenuity’s capabilities brought out the full potential of the helicopter by ascending to an altitude of 16 feet (5 meters) and then turning south, traversing the Martian terrain for 276 feet (84 meters).

While flying over the dusty surface, the helicopter was gathering images every four feet with its ground facing navigation camera for a total distance of 436 feet or 133 meters before successfully heading back to its starting point at Wright Brothers Field.

When the data collected from the fourth flight is analyzed, the fifth flight will be commanded to go on a one-way flight to a new site in the general direction the Perseverance rover is expected to traverse for its science mission. In fact, the rover has already begun moving away from its location at Van Zyl Overlook where it observed Ingenuity’s tech demo phase.

“With the short drive, we have already begun our move south toward a location the science team believes is worthy of investigation and our first sampling,” Ken Farley, project scientist for the Perseverance rover from Caltech in Pasadena, California, said in a NASA news release. “We’ll spend the next couple of hundred sols executing our first science campaign looking for interesting rock outcrop along this 2-kilometer (1.24-mile) patch of crater floor before likely heading north and then west toward Jezero Crater’s fossil river delta.”

“The team will assess flight operations after 30 sols and will complete flight operations no later than the end of August,” a NASA news release reads. “That timing will allow the rover team time to wrap up its planned science activities and prepare for solar conjunction — the period in mid-October when Mars and Earth are on opposite sides of the Sun, blocking communications.”