Motel Rooms and Gas Stations: How to Leave Mars 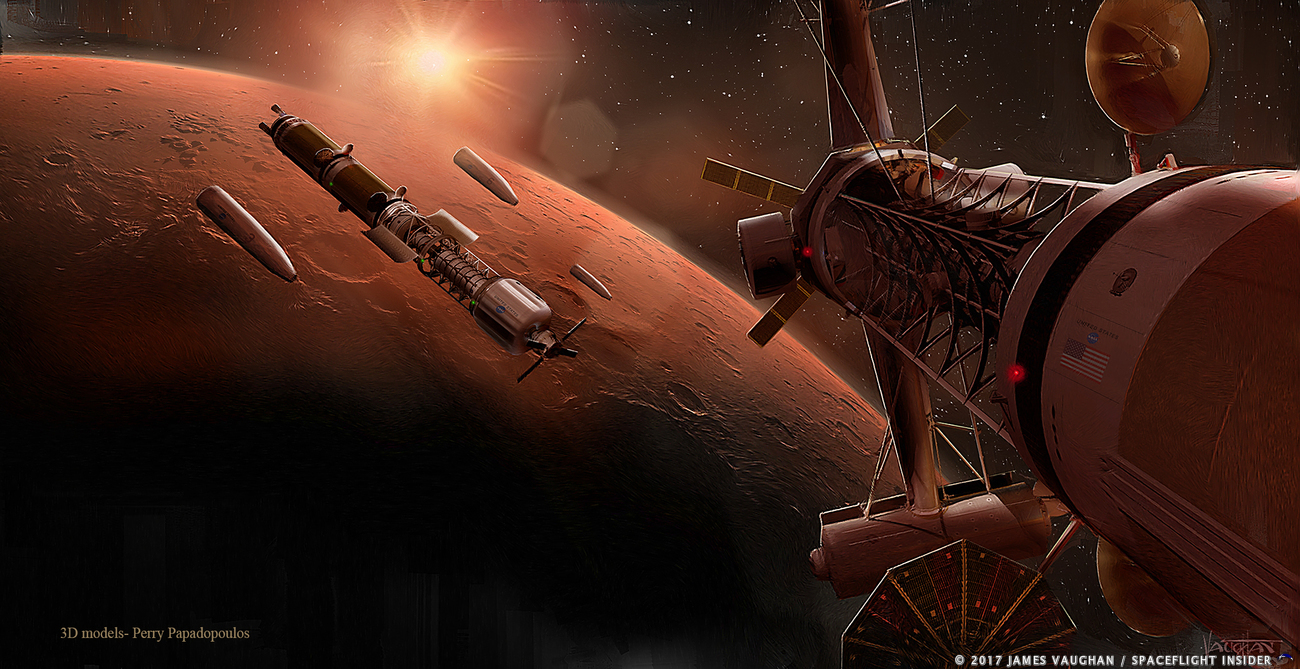 One day in the future, humans might actually land on the surface of Mars. After collecting rock samples, taking photos and performing all the other tasks demanded by this mission, the intrepid explorers will then face a daunting challenge, one often overlooked by most – leaving.

In a sense, arriving at Mars really means the trip is only half over.

You’re probably all like, “What’s the big deal?” Didn’t we already land people on the Moon and return them safely and didn’t we do so using technology that’s now fifty years old? How different can Mars be? Very.

Turns out that leaving the Moon was much simpler, for multiple reasons. For starters the Moon is comparatively small, possessing a gravitational pull only one-sixth that of Earth’s. This fact reduced lunar gravity to a manageable obstacle. Also, no real atmosphere stands in the way of upward departure from the surface. On top of that, returning astronauts needed only a few hours in lunar orbit to link their ascender back up again with a fellow astronaut in his separate return craft.

A flight to Mars presents numerous technical challenges which dwarf the complexities of a lunar landing. Mars is much larger than the Moon – it’s just over half the size of Earth – and thus has a heftier gravitational barrier to overcome. Mars also has an atmosphere. It’s thin compared to ours (roughly 1 percent of Earth’s), but certainly present, and dictates multiple design aspects of a Martian ascent vehicle that lunar landing engineers never had to address. For Apollo, the same vehicle used to land people also carried them off. But on Mars, weight restrictions alone may rule this out. It’s an aspect which is still being evaluated. 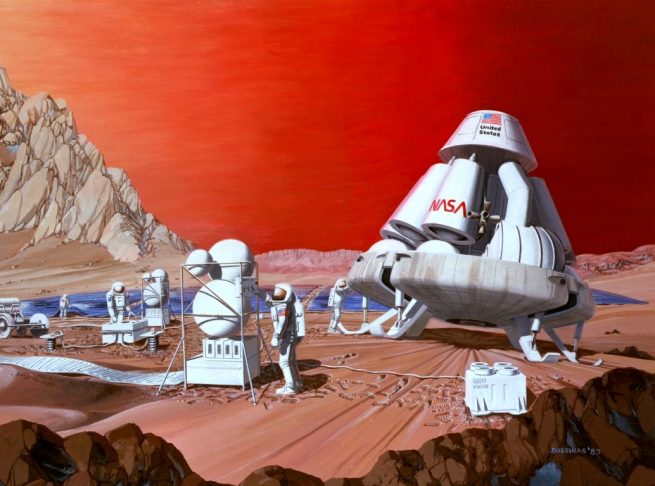 Artist’s depiction of a crew lander on the surface of Mars. Image Credit: NASA

Work done by NASA’s Johnson and Marshall Space Flight Centers shed light on the multiple complications of ascending from the Martian surface. The larger the vehicle, the more fuel needed to land it in the first place. This directly affects crew size, and will likely result in a minimal number of people fulfilling the descent because more crew means a larger vehicle, which means more propellant. Therefore, a major goal is reducing the overall scope of the ascent vehicle.

The core problem, as with any space mission, is weight. Currently, the Mars ascent craft is projected to weigh, at liftoff, some 24,000-49,000 kilograms depending on final configuration. Each kilogram transported upwards from Martian surface to orbit will require approximately seven additional kilograms of fuel. Naturally, every bit shaved off the overall mass is a benefit. With this in mind, look at the question of suits.

Astronauts will need to wear bulky protective suits during their surface explorations. Do these suits need to come back up for any reason? Getting out of them will be tough (requiring enough room to do so, while adding more weight). And they’ll be dirty from use – carrying the potential to contaminate the spacecraft, which could contaminate the orbiting mothership. Why not leave these suits behind, with the astronauts changing into lightweight pressure suits for the climb to orbit? Fabricating a space suit is expensive, so the idea of these costly garments becoming trash is a hot button topic for mission planners. But what could be done with them otherwise? It’s a domino effect: keeping the suits means they have to be stored somewhere. On Mars. That means some kind of equipment storage facility. Which probably means the creation of a semi-permanent Martian surface habitat. Which definitely means that at least the initial crews to visit will all arrive at this same location. Meaning less of the Martian surface will be explored by humans. All because the suits are heavy.

Once everyone’s aboard the ascent vehicle, more questions quickly bubble up. Like: will the crew need seats? They’re estimated to weigh 25 kilograms apiece, and would definitely take up room. Perhaps the crew could just stand shoulder-to-shoulder, elevator-style, clipped to the walls? Apollo crews did that. But: rendezvous between the lunar ascender and the orbiting mothership required only a few hours. Mars, in comparison, is large enough that a similar rendezvous could take up to 72 hours. People will need to remove their suits (in part because those space diapers are rated for only about 8 hours). They’ll need to eat. They’ll need quality rest. If the flight plan specifies 72 hours to docking, the ascent vehicle becomes less of an elevator and more of a motel room. 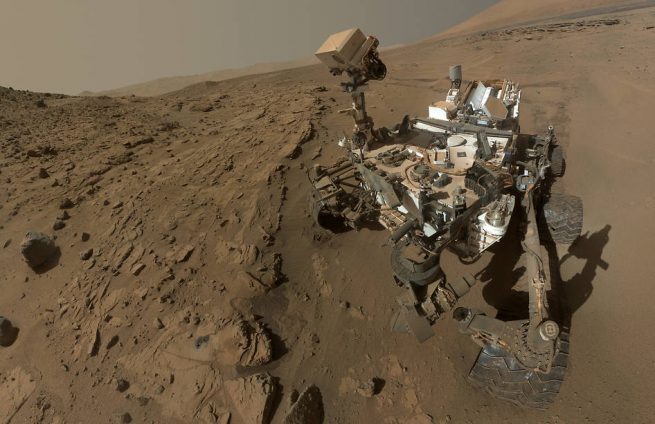 Many NASA landers and rovers have been sent to Mars with the express purpose of paving the way for crewed missions. Image Credit: NASA / JPL-Caltech

The question of fuel must also be addressed. At Martian liftoff, the ascent vehicle will require totally full propellant tanks. So did the Apollo lander, which reserved an entirely separate set of tanks just for the ascent. But leaving Mars will consume such great quantities of fuel – some estimates call for 33 tons – that landing all of it, safely, is probably out of the question. This has led to a somewhat farfetched-sounding but entirely feasible option: a Martian gas station.

The rocket engines used for leaving Mars are expected to run on methane and oxygen – two elements present in that planet’s atmosphere. They can’t be vacuumed directly into tanks per se, but they could be extracted over time by specialized machinery. So, one current scheme involves the ascender either landing with this equipment, or (more likely) connecting to a previously-sent rig which isolates and collects these elements, then tanks up the ascender. It’s an extraterrestrial Gulf station, right there on Mars. To many the approach sounds ludicrous.

Let’s break down the problem. First, what must be created? The more complicated product is methane. It requires carbon and hydrogen, the latter of which can be derived from water. Some mission concepts employ drilling operations – looking for water underground. But risking lives on the successful extraction of water from underneath the Martian surface has led to alternative approaches. Mission planners evaluated, and have for now discarded, the idea of landing stores of hydrogen – in part because this would require massively large tanks. So the current plan is to land with all the requisite methane, then start manufacturing oxygen. Every early mission would need this, which suggests that the infrastructure would be landed separately and become a permanent aspect of humanity’s growing presence on the Martian surface. Creating enough oxygen to fill the tanks is projected to require up to two years, give or take – leaving the return craft on Mars that entire time and subject to weather conditions ranging from benign to harsh. Not ideal. America’s upcoming Mars 2020 rover is slated to contain an experiment for creating oxygen from the Martian atmosphere. It’s an important first step.

Flying from Earth to Martian orbit, with people aboard, is a task of precise navigation – not to mention patience. Landing there poses an incredibly complicated technological challenge whether it’s a robotic probe or a capsule with humans aboard. But departing the Martian surface will require a whole suite of brand-new technologies, equipment, and procedures.

Jay Gallentine is an award-winning author and space historian, focusing primarily on unmanned solar system exploration. His books are notable for their deep research, conversational tone, and heavy use of original interviews with key individuals – Russian as well as American. His writing has also been praised for is straightforward explanations of complicated concepts. Gallentine's first effort, "Ambassadors from Earth" (University of Nebraska Press, 2009), detailed the turbulent early days of solar system exploration his second book, “Infinity Beckoned” was released in 2015.

Authoritative post with useful information, especially for anyone incorporating life on Mars into science fiction writing.

Thank you for posting and keeping this site alive. Good read and interesting.