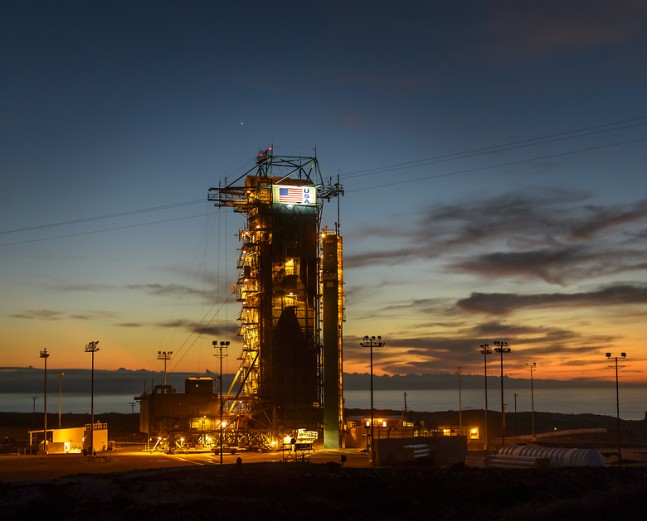 NASA’s Soil Moisture Active Passive (SMAP) observatory, able to produce the highest-resolution and most accurate maps of soil moisture ever obtained from space, is set to launch Thursday, Jan. 29, from Space Launch Complex 2 at Vandenberg Air Force Base in California. 9:20 a.m. EST (1420 GMT) marks the beginning of a three minute launch window, and if all goes according to schedule, a United Launch Alliance (ULA) Delta II rocket will carry SMAP into orbit.

As NASA’s first U.S. Earth-observing satellite designed to map global soil moisture, SMAP plans to dig into the topmost layer of our planet’s soil in order to accurately measure the hidden water within and determine how that soil water affects our weather and climate. The mission will produce the most accurate, highest-resolution global maps ever obtained from space of soil moisture while enhancing scientists’ understanding of the processes that link Earth’s water, energy and carbon cycles.

“SMAP will be the first mission to measure the soil moisture in the top two inches of the Earth’s surface,” said Chuong Nguyen, the SMAP mission manager for the Launch Services Program (LSP) at the agency’s Kennedy Space Center in Florida. By measuring soil moisture and how it freezes or thaws will be beneficial to scientists for multiple reasons. In order to grow, plants and crops extract water from the soil via their root system. If the moisture levels in the soil are inadequate, the plants will not grow, and ultimately the amount of crops produced will dwindle.

Energy produced by the Sun also has an effect on soil moisture. Soil moisture evaporates as a result of solar energy, cooling surface temperatures and as a result, increasing moisture in the atmosphere. This allows for more cloud formation and increased precipitation. Soil moisture plays a key role not only in short-term regional weather, but also in longer-term global climate.

During the summer months, plants in the planet’s northern boreal regions — forests located in high northern latitudes — grow by absorbing carbon dioxide from the atmosphere, before entering a dormant state during the winter. Scientists have discovered that the longer the summer growth period is, the more carbon dioxide is removed from the air and absorbed by the plants.

The start of the summer growing season is signaled by the thawing of water in soils, SMAP will be able to help scientists more accurately measure how much carbon dioxide is removed from the air. These measurements are key to better understanding of future global warming. SMAP also will advance our ability to monitor droughts, predict floods and mitigate the related impacts of these extreme events. It will monitor regional deficits in soil moisture while providing critical inputs into drought monitoring and early warning systems. The mission’s high-resolution observations of soil moisture will improve flood warnings by providing information on ground saturation conditions before rainstorms.

“Soil moisture is an important part of the Earth’s climate. As it evaporates, it condenses into the clouds and atmosphere, and that in turn becomes rain later in the weather cycle,” Nguyen said. “SMAP will help with climate forecasting and help predict a good growing season. That’s an important part of agriculture, in the U.S. and around the world.”

Approximately four hours before liftoff, Nguyen and his team will begin to monitor launch activity and will continue to do so right up until launch. The team will check the health and status of the rocket and ensure everything is nominal prior to flight.

“After the launch, we will monitor the performance of the rocket though its various stages of flight, and the separation of SMAP from the Delta II,” Nguyen said. “We’ll be looking for an indication that the satellite is healthy. We will all be literally holding our breath.”

SMAP contains two advanced instruments, working together to produce global soil moisture maps. It employs active radar very similar to the flash on a camera; however, it transmits microwave pulses instead of visible light. These pulses pass through clouds and moderate vegetation cover to the ground and measures how much of that signal is reflected back. SMAP’s radiometer has the capability to record measurements over relatively large areas, with a 25-mile resolution. In order for that measurement to be accurate for agriculture practices, scientists need to integrate data from SMAP’s radar instrument, which was developed and built at NASA’s Jet Propulsion Laboratory in Pasadena, California. SMAP’s radiometer, prior to its installation aboard the spacecraft. Photo Credit: NASA

The radar, will send out a signal and listen for the return. It has a resolution of only about 0.6 to 1.9 miles. The radar is more sensitive to vegetation and other features on top of the soil; however, it’s not as accurate as the radiometer.

“The receiver is very, very sensitive,” said Jeff Piepmeier, radiometer instrument scientist at NASA’s Goddard Space Flight Center in Greenbelt, Maryland. “If we could put a cell phone on the moon, working at the same frequency as the receiver, we could see the thing turn on and off.”

Together, the two instruments will provide greater accuracy and spatial resolution than either could on its own. The duo will also share a large, lightweight reflector antenna that will be unfurled in orbit like a blooming flower and then spin at about 14 revolutions per minute. The antenna will allow the instruments to collect data across a 621-mile (1,000-kilometer) area, enabling global coverage every two to three days.

“Combine the two together, use the best of both, and you come up with a pretty accurate soil moisture product at a spatial resolution of 6 miles,” said Peggy O’Neill, SMAP deputy project scientist.

The radiometer is capable of detecting a high-quality signal, but also picks up noise. Radio-frequency interference, or RFI, is what happens when technology, like air traffic control radars or closed circuit televisions, broadcast at the same or neighboring frequencies. The noise will “bleeds over” into the frequency that the radiometer is tuned into, and corrupt the data — just like on the radio when you hear one station trying to come in over top of another.

“Because we knew RFI was a problem, engineers at Goddard said we’ve got to design a way to detect it, and if possible throw out the bad data and leave enough good data behind,” O’Neill said. “It’s a new and unique system.” In the Astrotech payload processing facility on Vandenberg Air Force Base in California, technicians secure a transportation canister around NASA’s Soil Moisture Active Passive spacecraft for its move to the launch pad. SMAP will launch on a United Launch Alliance Delta II rocket from Space Launch Complex 2 at Vandenberg. Photo Credit: NASA

The new technique requires satellite data to be separated into different bins, with respect to sub-frequency and time. If there are outliers, that only appear at one time or a narrow frequency band, computer programs can throw those data out to isolate the natural signals from the soil, which will be more constant and from a wider frequency band.

Once in orbit, the SMAP satellite will deploy its very extensive boom assembly that has an almost 20-foot-diameter antenna at the end of it. During processing, the antenna assembly and boom were folded up and neatly loaded inside the payload fairing of the rocket.

Tim Dunn, the NASA LSP launch director, said the Delta II rocket is perfectly sized for the mass requirement for SMAP. The physical size of SMAP fits within the payload fairing volume of the rocket.

“Delta II has the nickname ‘the workhorse’ for NASA for a reason,” Dunn said. “It has an incredible track record.”

With the launch of SMAP, this flight will mark the 52nd Delta II mission for NASA. To date, there have been 152 launches of the Delta II since 1989, with 51 of those for NASA. The Delta II’s significance in NASA launch history can been seen with all of the science and exploration missions that it has carried aloft.  This flight will mark the second of 13 planned ULA missions for 2015, and the second launch in just over a week for ULA.

“Our team has been working very hard for the launch processing phase of the SMAP launch campaign. We’re all excited for countdown,” Dunn said. “The Delta II rocket and SMAP spacecraft are ready and the launch team is prepared and excited to be here at Vandenberg Air Force Base to launch this important mission for our nation.”

Its news to me that the soil emits microwaves that can escape into space. Probably they are too weak to help mitigate global warming, but must play some part in the Earth’s energy balance.