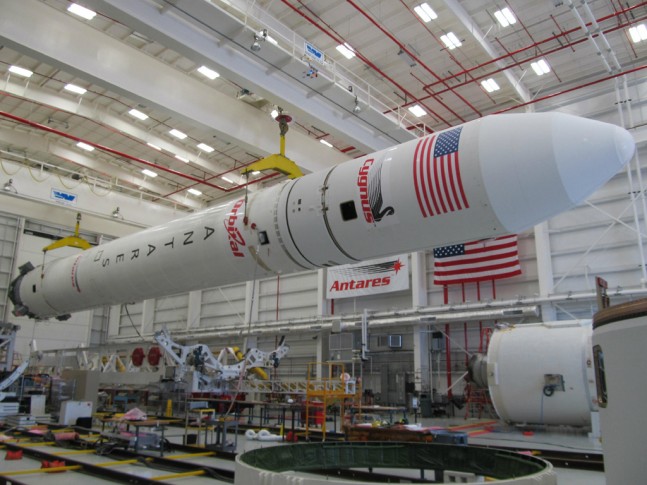 Another unfortunate set back has delayed the anticipated Orbital Sciences Corporation’s Antares launch this Friday but this time it is the weather. Due to severe thunderstorms in the Mid-Atlantic Regional Spaceport (MARS) area last night, the scheduled rollout of the rocket was cancelled. The new targeted launch date for the ORB-2 mission to the International Space Station (ISS) is Saturday, July 12 at 1:14 pm EDT.

An update from Orbital states: The Antares rocket is seen as it launches from Pad-0A of the Mid-Atlantic Regional Spaceport (MARS), Wednesday, Sept. 18, 2013. Photo Credit: Bill Ingalls/NASA

This afternoon, the company’s launch team determined the best course of action would be to postpone the launch one day to allow for normal launch operations processing. Despite the one day schedule slip, Cygnus will still arrive at the ISS on July 15 with berthing scheduled at approximately 7:24 a.m. EDT.

Despite the almost 24 hour slip, preparations are underway to meet the new targeted launch. Some of these preparations include the rollout of the Antares launch vehicle, which has been rescheduled for Thursday morning.

NASA has stated that:

If Cygnus launches on Saturday, rendezvous will still occur on Tuesday, July 15, with grapple scheduled at 7:24 a.m. Rendezvous coverage will begin at 6:15 a.m., followed by berthing coverage at 9:30 a.m.

Cygnus is filled with approximately 3,300 pounds of supplies for the station, including science experiments to expand the research capability of the Expedition 40 crew, crew provisions, spare parts and experiment hardware.

Orbital Sciences has also released a series of maps with locations along the Eastern Seaboard in which Saturday’s launch may be viewed from.

Please check back with SpaceFlight Insider for updates regarding the upcoming Antares launch.