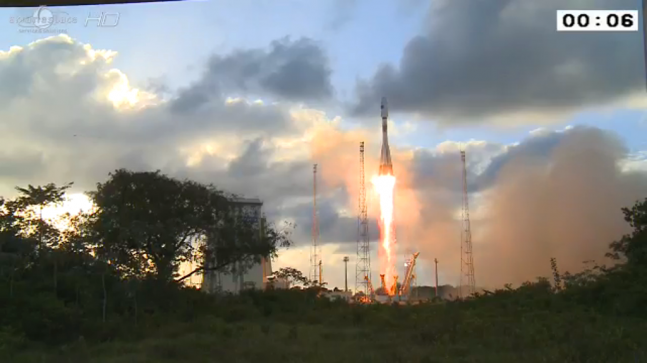 Just a few hours after United Launch Alliance’s (ULA) Atlas V rocket thundered off the pad in California, Arianespace successfully launched the European Space Agency’s (ESA) Sentinel-1A satellite on top of a Soyuz STA rocket from Kourou, French Guiana. Launching on time at 21:02 GMT (23:02 CEST), marks the first installment of Sentinel satellites that will be sent to orbit on order to image the Earth. The Soyuz STA displays its power – hurtling the Sentinel 1A spacecraft off of the pad in French Guiana. Photo Credit: ESA

ESA detailed how everything has gone normally for the mission with the spacecraft reaching its destination about 10 minutes after lifting off the launch pad.

“After a 617 second burn, the Fregat upper stage delivered Sentinel into a Sun-synchronous orbit at 693 km (430 miles) altitude. The satellite separated from the upper stage 23 min 24 seconds after liftoff.” Despite Russia being in the spotlight this month for its actions in the Ukraine, the Russian Soyuz launch vehicle preformed as expected for this launch out of French Guiana, delivering some 178,161 lbs of thrust during the first stage burn. It was the seventh launched from French Guiana since they were incorporated into the ESA’s fleet in 2011. The medium-class launcher has consistently been a reliable workhorse for both the European Space Agency as well as for the Russian Federal Space Agency, with its history dating back to Yuri Gagarin’s historic spaceflight during the Space Race in 1957.

An ESA excerpt on the Soyuz launcher said: “The Soyuz launch vehicle that is used at Europe’s Spaceport is the Soyuz-2 version called Soyuz-ST. This includes the Fregat upper stage and the ST fairing. Soyuz-2 is the most recent version of the renowned family of Russian launchers that began the space race more than 50 years ago by launching Sputnik, the first satellite placed in orbit, and then sending the first man into space.”

Having successfully preformed more than 1,700 manned and unmanned missions to space, the Soyuz launch vehicle successfully carried Sentinel-1A into orbit upon fairing separation.

Soon, the spacecraft will begin to blaze a path through space awaiting its twin, Sentinel-1B, which is scheduled to be launched sometime in 2015. With its 40 foot long radar antenna and two 33 foot long solar panels, the  satellite is due to stay in service for at least the next seven years.

According to the BBC: “The first hours were to be spent sending a series of commands to get the satellite to unpack its solar wings and the panels of its radar instrument. These had all been folded to fit inside the Soyuz. The task should be complete by early morning on Friday, European time.”

“Formal entry into service is expected in about three months’ time, although it is likely that the platform will start imaging the Earth as early as next week to begin calibration of the radar imager.” The spacecraft is seen in this image ensconced it the payload fairing which protected it through Earth’s atmosphere during the April 3 flight. Photo Credit: ESA

With the Copernicus program, the European Space Agency hopes to revolutionize how imagery from space is taken and processed. Utilizing its advanced radar instrument on board, the 10 foot long Sentinel-1A satellite spacecraft will be providing a constant supply of images regardless of weather and time of day.

“The mission will benefit numerous services. For example, services that relate to the monitoring of Arctic sea-ice extent, routine sea-ice mapping, surveillance of the marine environment, including oil-spill monitoring and ship detection for maritime security, monitoring land-surface for motion risks, mapping for forest, water and soil management and mapping to support humanitarian aid and crisis situations,” an ESA article on the Sentinel fleet states.

The Copernicus program and constellation of Sentinel satellites have gigantic potential and a means for growth over the next seven years that Sentinel-1A will remain active. Globally, the ESA has taken a giant leap in safeguarding our planet for the future.

When Sentinel-1B is launched next year, the pair of spacecraft will be taking images of our entire planet every six days, by orbiting exactly 180 degrees from one another at any given point during orbit. The images the pair will bring back will likely be the first full panoramic image of earth taken simultaneously. A close-up of the ignited Soyuz-2 launch vehicle as it lifts off from Kourou, French Guiana. Photo Credit: ESA Against a deep blue sky, the Soyuz STA makes the journey out of Earth’s gravity well. Photo Credit: ESA

“The Copernicus programme will provide European citizens with the most ambitious space-based services in the world for environmental and security applications.”

By utilizing Sentinel-1A and its images, a wide array of important information can be utilized for multiple applications, helping us better monitor and take charge of our fragile environment here on earth. In the words of ESA, this program surely is a new era in earth observation.

The ESA release also states that: “In addition to transmitting data to a number of ground stations around the world for rapid dissemination, Sentinel-1 is also equipped with a laser terminal to transmit data via European Data Relay System satellites in geostationary orbit for continual data delivery.”

Incredibly enough, the data produced by Sentinel-1A will be free of charge. The raw data from the spacecraft will be analyzed and processed by both public and private service providers, but remain “open source” to interested parties.

“Sentinel-1 is the result of close collaboration between the ESA, the European Commission, industry, service providers and data users. Designed and built by a consortium of around 60 companies led by Thales Alenia Space and Airbus Defence and Space, it is an outstanding example of Europe’s technological excellence.” An artist’s impression of the Sentinel-1A and Fregat separation. Image Credit: ESA

There are a total of five planned Sentinel satellites, which will eventually join Sentinel-1A in providing cross-calibrated images and long term data sets for use in providing large amounts of data for many applications, such as global disaster awareness.

“Ladies and gentlemen this is a great day for the union,” said Antonio Tajani, vice-president of the European Commission. “Sentinel-1A is the first satellite of the European Union’s Earth observation program Copernicus. In times of budgetary restrictions this launch marks a real achievement.”

Please be sure to follow Spaceflight Insider for more updates regarding Sentinel-1A’s mission, the Copernicus program, and the upcoming launch of the second installation, Sentinel-1B.