The search for Philae continues 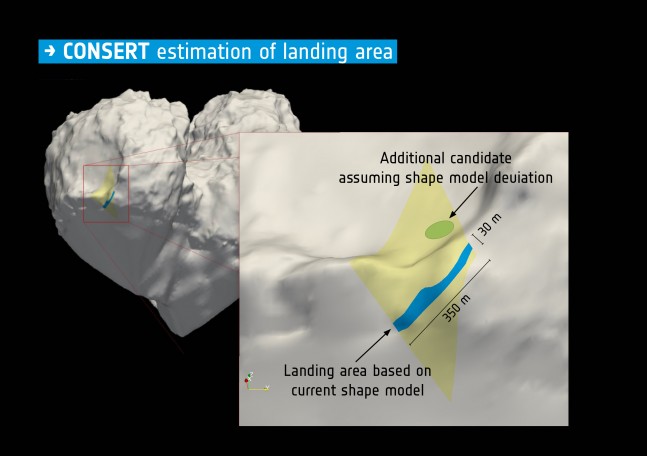 An estimation of where Philae might be located based on data from the lander's CONSERT instrument. Image Credit: ESA

On Nov. 12, the European Space Agency (ESA) led a mission that achieved the first ever soft landing on the surface of a comet. The mission, two decades in the making, showed us just how difficult space exploration can be. After thruster issues and the lander’s harpoons failed to fire, Philae had to rely on gravity to remain anchored to comet 67P/Churyumov-Gerasimenko. Data from the lander showed that after Philae’s initial touchdown, the washing machine-sized lander bounced not once, but twice. The orbiting Rosetta spacecraft was able to pinpoint Philae’s first landing, but its final resting place is still unknown.

After a ten year journey to the comet, that included multiple planet flybys for gravity assists, Rosetta and Philae arrived at their destination on Aug. 6. The next month was spent pouring over data to select the ideal landing site for Philae. Site J, otherwise known as “Agilkia,” was chosen for the amount of sunlight it received, as well as its smooth terrain. As a result of the failed anchoring system, when Philae made contact with comet 67P, it rebounded, sailing across the comet before bouncing a second time. Philae survived its triple landing, but unfortunately ended up in the shadows. With limited battery life, the lander went to work to complete with primary science mission. The lander is equipped with an assortment of ten different science instruments, and each one was able to collect data before the lander went into hibernation mode.

Philae and its panel of instruments have sent us unprecedented views and data about comet 67P. We now know what a comet sounds like, and have even seen evidence of organic molecules –the building blocks of life — on the surface. In order for researchers to fully comprehend this data, they need to pinpoint Philae’s exact location. Researchers are hoping that the Comet Nucleus Sounding Experiment by Radio wave Transmission (CONSERT ) experiment will be able to shed some light on the lander’s location. The experiment is a collaboration between both Rosetta and Philae. ESA recently released CONSERT data indicating where they think Philae is resting. Rosetta will scour the region in greater detail, hoping to get a glimpse of the lander in high definition. An illustration of this is shown in the video below.

“CONSERT works by transmitting radio signals from the orbiter to the lander, and when the geometry is right, the signals pass through the nucleus of the comet, allowing its interior to be analyzed,” ESA officials said.

“The signals are received on the lander, data is extracted, and a new signal is immediately transmitted back to the orbiter. As the radio waves pass through the different parts of the comet’s nucleus, variations in propagation time and amplitude occur, and these can be used to determine various properties of the internal material and carry out a form of tomography.”

Representatives with ESA went on to say, “By making measurements of the distance between Rosetta and Philae during the periods of direct visibility between orbiter and lander, as well as measurements made through the core, the team have been able to narrow down the search to the strip presented in the image shown above. The determination of the landing zone is dependent on the underlying comet shape model used, which is why there are two candidate regions marked.”

Right now, Philae is believed to be in a shadowy region and unable to full charge its batteries. After uploading all of the lander data, the team successfully rotated Philae 35 degrees, ensuring its largest solar panel would be facing the Sun, and able to collect as much light as possible. The team remains hopeful that as the comet travels closer and closer to the Sun, Philae will be able to collect and store enough energy to power back up. We do not know for sure if this happen or when it will be.

In the meantime, the Rosetta orbiter is in perfect health, and continues to carry out its mission as it orbits the comet.