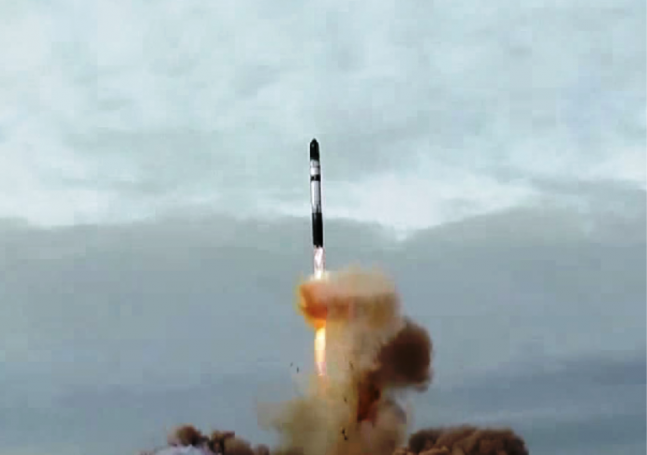 A Russian-Ukrainian Dnepr RS-20B (SS-18 Satan) rocket successfully launched five Japanese satellites into orbit on Thursday, Nov. 6. The mission used a military missile conversion program and took place at 7:35 a.m. UTC from the Yasny Space Site in the Orenburg region of Russia. A representative for Kosmotras company, in charge of the program, said that the rocket was carrying an ASNARO-1 Earth observation satellite and four university-made micro-satellites for Japan.Roscosmos announced that initial telemetry suggests that mission was a success.

“The rocket has successfully put the space vehicles into orbit,” a spokesperson for the Russian Strategic Missile Forces, Col. Igor Egorov said.

“With this launch the Strategic Missile Force confirmed effectiveness of training and smooth and concerted performance of the launch personnel and tested the reliability of the strategic missile force measurement complex, which is currently in the process of fundamental upgrade,” Egorov said.

The launch was executed by the Russian Strategic Rocket Forces of the Russian Ministry of Defense with the support of the Russian, Ukrainian and Kazakhstan organizations, which are part of the ISC Kosmotras industrial team.

When all of the satellites were released, the third stage continued firing to move it away from the satellites to mark the successful completion of this Japanese Cluster launch. The launch was the 21st Dnepr mission, and the second of the year. It was likely the final Dnepr mission in 2014 with at least three missions scheduled for 2015.

The ASNARO satellite fleet was originally planned to launch atop Japan’s new Epsilon SmallSat Launch Vehicle, however, changes in schedule prompted the Japanese to purchase a Dnepr launch vehicle to deliver the first satellite in the series to orbit. Dnepr is one of the cheapest launch vehicles that are currently flying offering a payload capability of up to 4,500 Kilograms to low-Earth orbit.

Four micro-satellites that were also launched Thursday are in the 50-Kilogram weight class, namely ChubuSat-1, Hodoyoshi-1, TSUBAME and Qsat-EOS – all dedicated to various technical demonstrations, Earth observation and scientific studies.

The Dnepr program, established by Russia and Ukraine in the 1990s, converts military RS-20 ICBMs into carrier rockets to put satellites into low Earth orbit. The program uses missiles withdrawn from combat duty, solving the problem of their elimination.

Dnepr is a R-36M missile also known as SS-18 Satan that was stationed all across the Soviet Union starting in 1966, outfitted with multiple warheads and independent re-entry vehicles. After the end of the cold war and the fall of the Soviet Union, a portion of the R-36 fleet was modified to become Space Launch Vehicles.

Technical maintenance of rockets used to be carried out by Ukrainian specialists, before Ukrainian President Petro Poroshenko ordered a moratorium on military-industrial cooperation with Russia in June over the armed conflict in Donbas.

This article originally appeared on Astro Watch and can be viewed here: SATAN