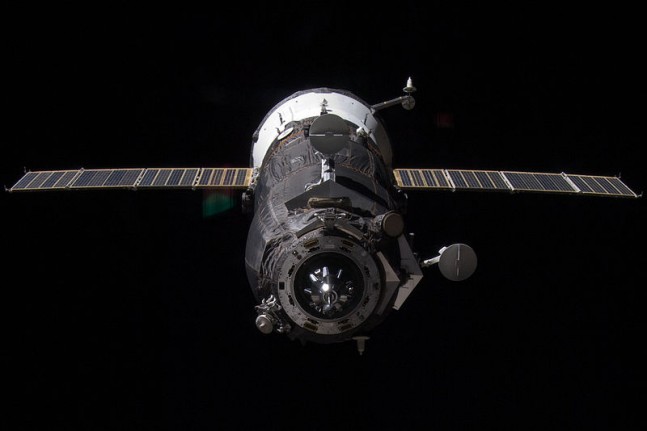 Earlier today Russia’s Federal Space Agency, or Roscosmos, successfully launched the Progress M-23M resupply craft destined for the International Space Station (ISS). Lifting off atop a Soyuz rocket from Baikonur Cosmodrone in Kazakhstan, Progress 23 is the second Russian unmanned resupply mission of 2014, a signal that despite diplomatic tensions between the United States and Russia, ISS operations remain stable for the time being. Liftoff occurred at 11:26 a.m. EDT (9:26 a.m. local time, 1526 GMT).

The Soyuz rocket, which was later fitted with the Progress 23 capsule, had been in position on the launch pad since Tuesday. The rocket, most famously used for ferrying cosmonauts and astronauts to the ISS, is the workhorse of the Russian Federal Space Agency (Roscosmos) with most Russian missions gaining their start on the venerable rocket. It is widely regarded as the most frequently used launch vehicle in the history of spaceflight. Yet while the Soyuz spacecraft responsible for bringing people to and from the Space Station naturally has reusable components, the fate of Progress 23 promises to be much different.

After delivering more than 4,000 pounds of cargo to the Expedition 39 crew, the Progress capsule will remain attached to the orbiting laboratory until a day before the next Progress launch. At that time the spacecraft will be loaded with trash and directed to conduct a fiery re-entry into Earth’s atmosphere. Burning up in reentry over the Pacific Ocean, Progress will complete its mission by effectively becoming a cosmic incinerator.

Progress 23 is expected to reach the Station after completing a flight profile of some six hours. This trajectory is one of two typically used in ISS launches. However, predetermined flight predictions are subject to change. This is what happened on the 25th of last month when the Soyuz spacecraft with three members of the Expedition 39 crew had one of its normal burns to place it on the proper path to the ISS fail. The crew and flight controllers were then forced to revert to the two-day flight profile. The Soyuz rocket was carried out to the launch pad via rail. Once there it and its payload of the Progress M-23M cargo vessel were raised into the vertical position. Photo Credit: NASA

Today’s launch went off without a hitch. The Soyuz rocket, aided by its four kerosene and liquid oxygen fueled boosters roared off the pad right on time. Within a minute of launch the Soyuz-2 rocket/Progress spacecraft stack were supersonic and passing through the maximum dynamic pressure (max-q) region of the atmosphere. Coupled with the rocket’s speed, the Soyuz-2 encountered the greatest amount of stress during this period – but blazed through it with no apparent issues. At this time the rocket was traveling at more than 1,000 miles per hour.

At approximately two minutes elapsed time and about 30 miles in altitude, the four boosters were spent. Now little more than dead weight, they were jettisoned – impacting the steppes far below. Shortly thereafter, the spacecraft’s payload shroud, having shielded the spacecraft through Earth’s atmosphere, its mission complete, will also be jettisoned.

A few seconds shy of five minutes mission elapsed time and more than 100 miles above the Earth. At this point, the third stage’s RD-110 rocket engine continued pushing the mission to a rendezvous with the ISS. The cargo vessel at this point in the flight was traveling at speeds in excess of 13,400 mph. Progress spacecraft have been ferrying supplies to several space stations, such as the Soviet Salyut 6, Mir and now the ISS. The vessel’s lineage reaches back to the late 1970s. Photo Credit: NASA

Once the Progress M-23M separates from the third stage, the spacecraft’s two solar arrays will be deployed, providing the power needed for the vehicle to complete its journey to the ISS.

Progress 23 is comprised of three primary components, the Pressurized Cargo Module, Refueling Module and Instrumentation and Propulsion Module. The spacecraft’s thrusters can be used to raise the International Space Station’s altitude or to adjust its orientation via Progress’ thrusters. When at the space station, Progress is either docked to the Zvezda Service Module or Pirs Docking Compartment. These vessels have a long service record supplying the various space stations that the former Soviet Union and Russia have been involved with. The first Progress resupply mission was to the Salyut (Salute) 6 space station which was operated by the former Soviet Union – which was in service from 1977 until 1982. Including the crewed and unmanned versions of Soyuz/Progress, there are six spacecraft which travel to the ISS. Clockwise they are: JAXA’s HTV, ESA’s ATV, SpaceX’s Dragon, Roscosmos’ Soyuz, Orbital’s Cygnus and Roscosmos’ Progress. Photo Credit: NASA

Over time various upgrades have been made to the vessel, no fewer than five different versions of the spacecraft with more planned.

The rather procedural nature of Progress’ launch and mission is belied by the current diplomatic situation between the United States and Russia over the Russian annexation of Crimea. NASA has not been exempt from the fallout, and the Agency has since suspended much of its high-level contact with its Russian counterparts. ISS operations have so far been exempt from the severance of ties, though no doubt the wider politics of U.S./Russian relations remain a cause for concern.

Since 2011, which saw the end of the Space Shuttle program, the country has lacked the ability to launch astronauts into orbit. As a consequence, NASA has for the last several years, paid Russia for space on Soyuz capsules. Current rates for each Soyuz seat are at approximately $70 million. While NASA retains the ability to dispatch supplies to the ISS through private companies such as Orbital Sciences Corp. and SpaceX, it is still some two to three years away from being able to do the same with astronauts.

The next American Commercial Resupply Mission to the ISS is scheduled to take place on April 14 on a SpaceX Falcon 9 rocket. The ISS Program employs a wide range of cargo vessels to keep the outpost stocked with fuel and supplies. Besides Progress, the various supply craft that keep the station stocked with fuel and supplies include the European Space Agency’s Automated Transfer Vehicle, the Japanese Aerospace Exploration Agency’s HTV and NASA’s commercial cargo partners, Orbital Sciences Corp. and SpaceX Cygnus and Dragon vehicles (respectively).

This week will be a busy one in terms of space flight. Today’s launch will be followed tomorrow with the planned flight of a United Launch Alliance Atlas V 541 rocket from Cape Canaveral Air Force Station. Four days later and SpaceX is scheduled to send one of the company’s Dragon spacecraft to the ISS on the third of 12 missions to deliver cargo and other supplies to the Station’s crew.