Russian Proton racks up another failure with loss of Express-AM4R 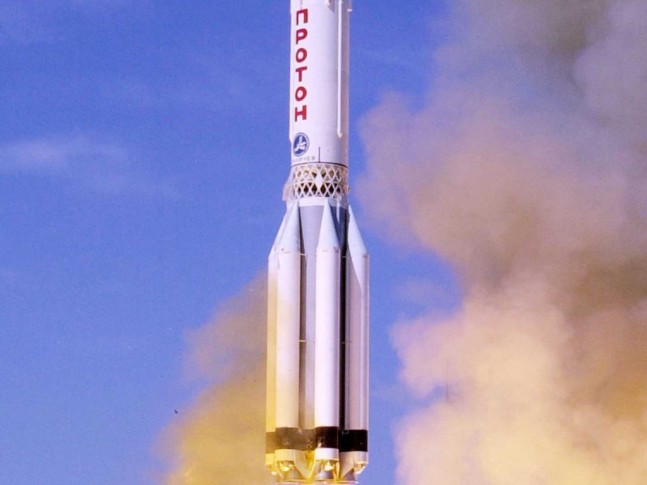 The launch of the Zvezda service module of the International Space Station on a Russian Proton-K rocket. Photo Credit: Scott Andrews /NASA

On Thursday afternoon, at 5:42 p.m. EDT, a Russian Proton rocket carrying the Express-AM4R telecommunications satellite launched as scheduled from the Baikonur Cosmodrome in Kazakhstan. The first several minutes of the flight appeared nominal. However, at approximately nine minutes into the flight, during the firing of the rocket’s third stage, an unknown anomaly developed with the launch vehicle and the webcast of the launch abruptly ended. Various news outlets, including NASASpaceFlight.com, are reporting a failure in the third stage and a probability that the stage, along with its satellite payload, crashed in the Russian far east or into the Pacific Ocean. The Russian news source, RT has reported that the Proton launch vehicle has crashed.

Russian news agency Itar-Tass, however, claims that there is the possibility that both the launch vehicle and the Express-AM4R have burnt up in the atmosphere, with small fragments falling back to Earth. However, it is likely that the toxic rocket fuel disintegrated in the atmosphere and therefore would not cause a threat. The launch of the AM4R satellite onboard a Proton rocket has ended in failure. Photo Credit: International Launch Services

“All the causes and a possible impact area are being ascertained. No information has been received from Baikonur so far, since people monitoring the Proton-M liftoff are in a bunker at the moment of liftoff proper,” an official of Russia’s Federal Space Agency reported to Itar-Tass. “The breakdown occurred during the operation of the third stage of the carrier rocket, prior to the acceleration unit’s separation.”

Somewhere between second and third stage separation, an emergency cutout of the rocket’s propulsion unit occurred and the satellite was not deployed as planned.

According to the data given to officials: the engine of the third stage of the carrier rocket failed at an altitude of 161 km because of deviation of the Proton-M from the flight path.

“Contact with the carrier rocket was lost in the 540th second after liftoff,” the official specified, adding, “It is known that the nose cone did not separate from the rocket.”

The payload fairing (PLF) of the rocket, also known as a nose cone, protects the spacecraft and its payload inside during ascent through the atmosphere to see it safely into orbit.

Luckily, so far there has not been any reported damage or causalities due to the mishap that occurred in the eary morning hours in Kazakhstan. However, Xinhuanet and other outlets have issued reports that some pieces of the Proton and the AM4R satellite may have landed in China.

The series of Express satellites built for the Russian Satellite Communications Company (RSCC) have also been insured for 2.5 billion rubles (about $71.8 million US dollars). In so doing, they appear to be showing that they are not taking any chances after the loss of its predecessor, the Express AM4 lost in 2011. Whether the Express-AM4R satellite remains in an undetermined orbit or was lost upon reentry is still unknown, but Russia will have to wait yet again before attempting another spacecraft in the Express series. This launch failure comes in light of Russian Deputy Prime Minister Dmitry Rogozin’s recent suggestion that U.S. astronauts should travel to the International Space Station (ISS) via “trampoline,” a veiled threat to end Russian transportation of U.S. astronauts to the ISS. Rogozin’s comment came in response to criticism of United Launch Alliance’s (ULA) reliance on Russian made RD-180 engines to power its Atlas V booster which, in turn, came after Space Exploration Technologies Corporation (SpaceX) raised the Russian engine issue in a lawsuit challenging the U.S. government’s sole-sourcing of Department of Defense (DOD) launches with ULA. Rogozin also suggested on Tuesday that Russia may restrict the future export of RD-180’s to the U.S. and prohibit their use on DOD launches.

The recent deterioration in U.S. / Russian space relations has come as a result of the escalating tension between the two countries in the aftermath of the Russian annexation of the Crimean peninsula from Ukraine. In response to the annexation, the U.S. has imposed various economic and travel sanctions against Russia, and certain Russian officials, including Rogozin. The SpaceX lawsuit, along with a resulting short-lived injunction prohibiting ULA’s purchase of Russian RD-180 engines, has also contributed to the rising level of tension.

Despite being a workhorse for the Soviet and Russian governments since the 1960’s, the Proton rocket has a history of problems, the most recent and dramatic of which was a failure shortly after liftoff in July 2013 that resulted in the rocket tumbling out of control and crashing to the ground in a giant fireball. An artist’s interpretation of the Express AM4R satellite in orbit. It is presently believed that the AM4R spacecraft crashed into the Pacific Ocean. Image Credit: Airbus Defence and Space

RT has reported (citing RIA Novosti) that at all launches of “Proton-type rockets” will be halted until the reason for the failure is determined. This most recent mishap underscores the risks of making high-profile comments regarding the risky business of launching into space. Shortly after the United States retired its fleet of space shuttles, Russian officials lauded that it was now the “Soyuz Epoch” – which was followed by the August 24, 2011, loss of the Progress 44 resupply vessel to the International Space Station. Progress 44 ended up slamming into the Altai Region of the Russian Federation.

Officials and state commission members are currently reviewing the telemetry information in order to look further into the malfunction of the Proton M launch vehicle to see exactly what happened during flight.