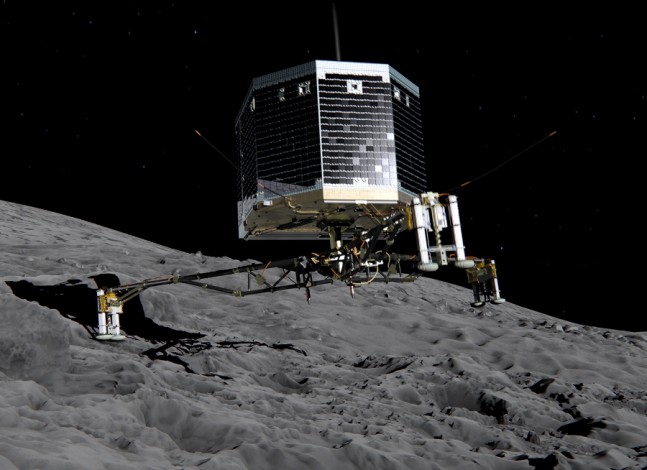 ESA's Rosetta mission makes history by being the first to land a spacecraft of the surface of a comet. Image Credit: ESA

The European Space Agency (ESA) has been busy this week, preparing for one of its biggest milestones yet. After a decade-long journey, ESA’s comet-chasing Rosetta spacecraft successfully deployed the Philae lander, and achieved the first-ever soft touchdown on the surface of a comet. At 11:03 a.m. EDT (16:03 GMT) on Wednesday Nov. 12, after a seven-hour-long descent, Philae successfully touched down on Comet 67P/Churyumov-Gerasimenko’s surface. The Agilkia landing site, located on the head of the comet, was selected from ten potential sites, after Rosetta arrived in orbit above the comet. Philae is equipped with a drill, that will burrow into Rosetta subsurface, collecting samples for analysis. Image Credit: ESA

The ESA-led Rosetta mission launched atop an Ariane 5G+ rocket from the Kourou spaceport in French Guiana on March 2, 2004.

It’s mission was to be the first spacecraft to rendezvous with and ultimately land on the surface of a comet. For the last decade, the Philae lander has been hanging on its companion spacecraft, taking a tour of the solar system with its mother craft and waiting for its portion of the mission to begin.

The Rosetta spacecraft is named after the famed Rosetta stone, and Philae after an island in the Nile river where an obelisk was discovered. Together the stone and the obelisk helped decipher Egyptian hieroglyphics. Scientists hope that Philae and Rosetta will be able to help decipher or unlock the secrets of comets.

Comets are essentially cosmic time capsules, harboring details of the formation and early days of the solar system. Rosetta’s path through the solar system can be seen in this diagram. Image Credit: ESA

As a hat-tip to the Curiosity mission and its famed “seven minutes of terror” landing, Philae’s descent is known as “seven hours of terror.” Once released, the craft could not be steered, but was in a free-fall until it touched down on the comet’s surface.

The landing was fully autonomous, and all commands were loaded prior to separation. Several hours prior to separation, Philae was turned on, batteries prepped, and its fly-wheel was started. The gyroscopic effects of the fly wheel were essential in ensuring the lander had the stability needed to keep from tumbling during descent.

View of the Philae lander on its way to the comet’s surface, as seen by Rosetta’s OSIRIS camera. Image Credit: ESA

After multiple rounds of Go/No Go checks, Philae was given the green light to begin its descent at 3:30 a.m. EDT (0830 GMT). In order to separate from the Rosetta spacecraft, wax covering a latch was melted, permitting the lander to automatically unscrew itself.

If this process had failed, the backup release plan was to fire a small charge, pushing the lander away and setting it on its course. The folks in mission control, then had to wait a grueling seven hours to see if the lander made it to the comet. Since comet 67P is so far from Earth, it takes 30 minutes for the landing confirmation to reach us. Mission control received confirmation of the lander’s touchdown at 11:03 a.m. EDT (0403 GMT).

“We congratulate ESA on their successful landing on a comet today. This achievement represents a breakthrough moment in the exploration of our solar system and a milestone for international cooperation. We are proud to be a part of this historic day and look forward to receiving valuable data from the three NASA instruments on board Rosetta that will map the comet’s nucleus and examine it for signs of water,” said John Grunsfeld, astronaut and associate administrator for NASA’s Science Mission Directorate. “The data collected by Rosetta will provide the scientific community, and the world, with a treasure-trove of data. Small bodies in our solar system like comets and asteroids help us understand how the solar system formed and provide opportunities to advance exploration. We look forward to building on Rosetta’s success exploring our solar system through our studies of near earth asteroids and NASA’s upcoming asteroid sample return mission OSIRIS-REx. It’s a great day for space exploration.”

Once Philae reached the surface, a pair of harpoons were expected to fire from the lander’s legs, anchoring itself into the comet. A thruster on the lander would then fire helping keep it down, while screws on each of the three feet burrowed into the comet.

During final separation preparations, the team discovered an issue with the cold gas thruster, indicating that Philae would have to rely solely on its harpoons and foot screws to anchor it in place. Mission control determined it was still safe to go ahead with the landing as planned. However, after receiving touchdown confirmation, the team realized Philae’s harpoons misfired. The cause is currently unknown, but the team is trying to get to the root of the issue. Gravity alone is not going to hold Philae to the comet’s surface, so this could be a cause for concern. View of the Agilkia landing site as seen by Rosetta. Philae will touch down just above the boulder-shaped depression. Image Credit: ESA

The first images expected from Philae after touchdown are of the landing site, including panoramic shots of the surrounding area. Philae is equipped with sensors and will measure the density and thermal properties of the surface; use its gas analyzers to detect and identify any complex organic chemicals that might be present; as well as measure the magnetic field and interaction between the comet and solar wind. Philae is also equipped with a drill, able to dig up to 8 inches (20 cm) below the comet’s surface, collecting samples for testing.

ESA project scientist, Matt Taylor, said this about the mission: “Rosetta is a big deal, enough to be the sexiest mission ever. Rosetta has rendezvoused, orbited and deployed a lander to the comet surface. If that isn’t enough firsts, the orbiter will remain alongside the comet for over a year, watching it grow in activity as it approaches the Sun, getting to within 112 million miles (180 million kilometers) in summer next year, when the comet will be expelling hundreds of pounds of material every second.” There was lots of applause from happy team members in ESOC after hearing the news of Philae’s successful landing. Image Credit: ESA/NASA TV

This mission has been one of ambition, science, and firsts. Rosetta is the first spacecraft to rendezvous with a comet, the first to orbit a comet, and now the first to land on a comet. So far we have seen unprecedented views of a comet’s surface, discovered what a comet smells like, and even heard it “sing.”

To ensure Rosetta was ready for her mission, the orbiter was placed in hibernation mode back in 2011, and later awoken in Jan. 2014. She officially began her science mission on May 7, 2014. At a distance of over 1.2 million miles (two million kilometers), researchers began to receive more detailed images, soon realizing comet 67P had a very unusual shape. Resembling a rubber duck, comet 67P consists of two lobes, a larger one (body) and a smaller one (head).

On Aug. 6, Rosetta officially reached its destination and began to orbit the comet at a distance of only 62 miles (100 km), eventually conducting maneuvers and getting to a distance of only 6 miles (10 km). Over the past three months, scientists studied the comet’s terrain in great detail and narrowed down the pool of landing sites from ten to five. From those final five, a primary landing site and one backup site was chosen. Originally dubbed site J, the primary landing site is located on the head of the comet and thanks to a recent ESA contest, has been officially named Agilkia in honor of the island located in the Nile.

Rosetta’s instruments have been busy studying the comet from different angles, and taking images at different wavelengths. Using the VIRTIS instrument, scientists were able to take the comet’s temperature, determining it is warmer than expected and revealing the surface is actually dark, dusty and porous instead of icy.

Throughout history, comets have fascinated us with their unpredictability. Even though we have a better understanding of comets behave, there is still much to discover. Earlier this year, researchers observed a dramatic increase in the comet’s activity, and at that time Rosetta was too far from the comet to determine the cause. In June, Rosetta’s MIRO instrument started detecting water outgassing from the comet. At the time, Rosetta was located at approximately the same distance as the Earth is from the Moon, from the comet, and MIRO observed 67P ‘sweat’ about 1 cup (300 mL) of water per second – the equivalent of two glasses. Ever since, the activity has rapidly increased, with peaks of 1.3 gallons (5 liters) of water per second seen by MIRO.

Rosetta’s ROSINA instrument, also known as the ‘comet sniffer’ detected a variety of molecules in the coma of 67P, including water, carbon monoxide, carbon dioxide, methane, and even a few nitrogen and sulfur varieties. Translation: comet 67P smells like a combination of ammonia, urine, and rotten eggs.  VITRIS also detected both water and carbon dioxide in the comet’s coma, backing up ROSINA’s findings.

The GIADA instrument, teaming up with COSINA, has been busy collecting dust particles, and measuring their velocities. After careful analysis, COSINA determined that at least one dust grain contains sodium and magnesium. This dust grain sparked the researchers’ curiosity so much, they named it Boris. Now, both sodium and magnesium have been detected in comets before. However, in this case, the minerals were detected in the comet’s inner coma and not the tail region.

Rosetta will continue to orbit comet 67P while it makes its approach to the Sun. Philae will take measurements and observe how the comet changes as it gets closer and closer to perihelion, which will take place in August 2015. Philae has already begun to transmit telemetry, as well as a preliminary image. Here is the lander’s last view of its companion spacecraft, Rosetta, captured shortly after separation. Later today, we expect to see the first panoramic shots of the region around the Agilkia landing site.

ESA Director General, Jean-Jacques Dordain had this to say about today’s historic landing: “This is a big step for human civilization. We are the first to have landed on a comet and that will stay forever. This mission is a success, and the biggest problem with success is that it looks easy. This was not easy. It took a lot of hard work and cooperation.”

This is simply amazing.Imagine a few years ago if one had planned an operation such as this,they would have been laughed at!Something akin to threading the eye of a needle with boxing gloves on.A 10 year trip,most of us really cannot appreciate what went into this to pull it off!!Quite commendable,quite commendable!CONGRATULATIONS!!
Respectfully,G.L.Mitchell,W.Caldwell,NJ,USA