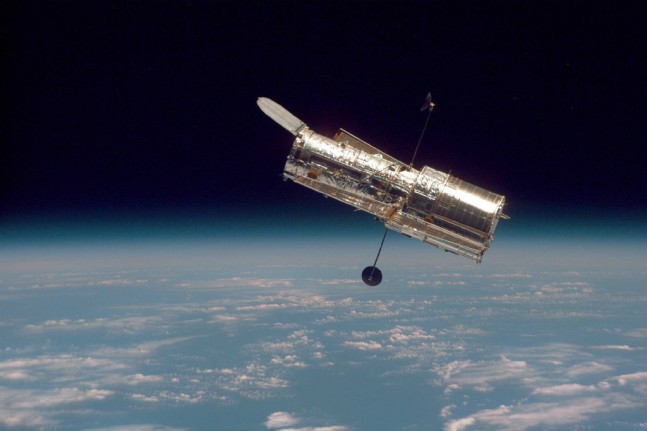 This photograph of NASA's Hubble Space Telescope was taken on the second servicing mission to the observatory in 1997. Photo Credit: NASA

As the James Webb Space Telescope (JWST) moves slowly towards its 2018 launch date, parts of its predecessor are securing a second life back on Earth. The Hubble Space Telescope, which Webb will be launched to replace, is the focus of the new “Repairing Hubble” exhibit at the Smithsonian National Air and Space Museum, which opened in Washington, DC earlier this week.

“Repairing Hubble’s” April opening marks twenty-four successful years after the groundbreaking telescope’s rocky initiation. Soon after launch on April 24, 1990, images from the telescope revealed a minor yet catastrophic fault in one of the internal components. A mirror responsible for focusing stellar light was determined to be ground to the wrong specification by four microns, fifty times slimmer than the diameter of a strand of hair. The small difference caused light to scatter erratically in the sensitive optics and resulted in blurry photographs. Replacing the mirror in orbit was deemed impossible, and as a consequence engineers developed lenses with equal and opposite defects to cancel out the problem. The two primary corrective units, COSTAR and WFPC2, are centerpieces of the museum’s new exhibition.

COSTAR was designed to correct the clarity for three of Hubble’s original instruments: the Faint Object Camera, the Goddard High Resolution Spectrometer, and the Faint Object Spectrograph. COSTAR was unable, however, to correct the optics for a fourth instrument, the Wide Field/Planetary Camera (WFPC). As a result, an entirely new instrument (WFPC2) was hastened to completion for early installation. WFPC2 was fitted on Earth with an adapted lens to compensate for the defective lens already in orbit. WFPC2 in particular would contribute some of Hubble’s most breathtaking image over the next fifteen years, including the famous deep field photograph. Deep field captured light from over 4,000 galaxies stretching as far back in time as twelve billion years. Hubble’s images have contributed to the popularization of space research and spaceflight over the last two decades. It is fitting that some of the components most responsible for these images should be on display in one of the world’s most visited museums. Both COSTAR and WFPC2 were removed from Hubble on its fifth and final servicing mission in 2009.

Hubble is nearing the end of its lifespan. With no planned service missions, and a replacement in production, the storied space telescope will likely return to Earth (possibly in pieces) in the next ten or fifteen years. Yet along with its photographs and immense contribution to our understanding of the universe, Hubble’s surviving instruments and lenses will serve as monuments to the engineers and scientists responsible for building, and repairing, such an historic piece of technology.