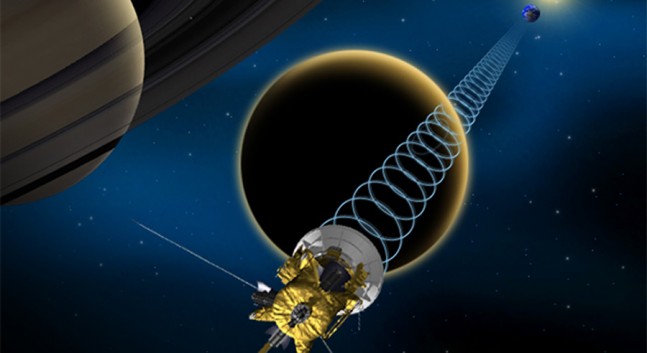 NASA’s hugely successful Cassini spacecraft, which has been orbiting the sixth planet for the past 10 years, carried out its latest flyby of Saturn’s giant moon Titan on Wednesday, June 18. One of the highlights of this encounter, designated T-102, was a radio-echo experiment similar to the one conducted for the first time just a month ago when Cassini last skimmed past Titan.

The second largest moon in the solar system, after Jupiter’s Ganymede, Titan is intriguing for being the only known moon with a dense atmosphere. In fact, Titan’s nitrogen-dominated, organics-laced atmosphere has a surface pressure half as great again as that found on Earth. It’s also the only extraterrestrial object we know that has seas and lakes – but not of water because Titan is far too cold for that. Instead, the liquid bodies of this strange, fascinating world, a billion miles away, are thought to be a blend of simple hydrocarbons. Titan can be seen here with another of Saturn’s moons orbiting the gas giant. Image Credit: NASA / JPL

Astronomers believe that liquid methane and ethane – two substances that would normally be gases on Earth – make up the seas and lakes of Titan. But that theory hasn’t been based on any direct measurements, until now.

Starting with the May 17 flyby of Titan by Cassini, dubbed T-101, scientists and engineers working on the project placed the spacecraft on a precise trajectory that allowed Cassini to bounce a radio signal off the moon that could be picked up by antennae on Earth. By analyzing details of the echo, the radio science team hopes to extract valuable clues as the nature of the surface, including its physical properties and, by inference, its chemical composition.

Once again, last Wednesday, mission controllers guided Cassini onto a carefully calculated path, enabling it to use Titan as a mirror for probing its mysterious liquid expanses. The May encounter had focused on the moon’s two biggest seas, Ligea Mare and Kraken Mare, both located in the northern hemisphere. The June approach was targeted at a region between these two major bodies where earlier radar imaging had revealed the presence of features that looked similar to rivers, channels, and small lakes on Earth. In the early hours (PST) of June 18, Cassini swooped to within 2,274 miles (3,659 kilometers) of Titan, at a relative speed of 13,000 miles per hour (5.6 kilometers per second). Meanwhile, back in a Jet Propulsion Laboratory control room near downtown Los Angeles, members of the spacecraft’s radio science team waited anxiously for news that signals from Cassini had bounced off the selected area and been picked up by an Australian telescope array. A coastline on Titan as imaged by the Huygens lander in 2005. Image Credit: ESA

In the event, not only were the radio reflections received but, as in the case of the May experiment, they were evidently of high quality – good enough to give new information about the material on Titan off which Cassini’s transmission had ricocheted. However, the analysis could not be done in real time and it will be at a Cassini science team meeting next week in the Netherlands that  preliminary results from the encounter are expected to be announced.

Another experiment pioneered in the T-101 May flyby aimed to learn more about the make-up of Titan’s atmosphere. Known as radio occultation, it involved sending a signal from Earth, at precisely tuned frequencies, which penetrated the moon’s atmosphere and was received by Cassini on the other side. The spacecraft then transmitted an exact copy of the received transmission back to Earth. The idea is that changes to the original signal, caused by passage through Titan’s atmosphere, give information about variations in density and temperature at different heights within the atmosphere.

The radio occultation experiment was repeated, with every indication of success in the June flyby. So, the next few days should see the release of some important new information about conditions both on and above the surface of this most enigmatic world. Stayed tuned to Spaceflight Insider for further news.

Exciting well written article. I am an amateur with great interest in the progress of science and astronomy. Thanks for sharing with Facebook friends.