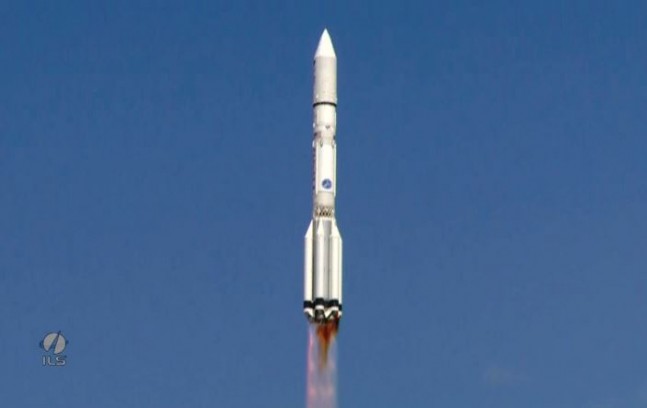 A Proton-M rocket with a Briz-M upper stage carrying the Luch-5V and KazSat-3 telecommunications satellites thundered into clear skies from the Baikonur Cosmodrone in Kazakhstan at 12:25 a.m. EDT (04:25 GMT) on Monday, April 28. Delivered out to Launch Pad 81 four days prior on April 24, launch vehicle and cargo were made ready for launch over the past half-week – with the results of the team of engineers’ labor clearly evident.

The KazSat-3 telecommunications satellite is designed to provide telecommunication services, broadcasting and high-speed Internet access to Kazakhstan and neighboring countries. KazSat-3 is constructed on the basis of an Express-1000H satellite platform. The payload module of the satellite was manufactured by Italian company Thales Alenia Space. The KazSat-3 satellite is equipped with 28 Ku band transponders. It is expected that the KazSat-3 to have a lifetime of about 15 years. The two communications satellites were launched from the Baikonur Cosmodrone in Kazakhstan at 12>
:25 a.m. EDT (04″25 GMT). Photo Credit: Tsenki/Roscosmos via SpaceFlight101

The sequence of events leading up to orbital insertion played out as such:

The actual beginning of launch operations started nearly 12 hours prior to launch just before midnight local time. The Briz-M was activated to check out the upper stage’s guidance, navigation and control systems. As things progressed, the software required for the mission was uploaded and the batteries were charged. With just eight hours prior to launch, Pad 81 was cleared of non-essential personnel so that the rocket’s propellant could begin being loaded.

Three seconds before launch, the six RD-276 engines in the first stage were ignited, unleashing a combined thrust estimated at about 2.5 millions lbs. At two seconds prior to liftoff the RD-276 engines were cranked up to full power in preparation for launch – a second later and they were roaring at 100 percent and ready to be set loose.

Ten seconds into the mission the Proton-M conducted a “roll maneuver” so as to place it on the correct azimuth for orbit. The Proton rocket is controlled on its way “uphill” via an avionics pod which is located in the rocket’s third stage. The Proton-M launch vehicle can trace its lineage back to the early days of the Space Age. Photo Credit: Tsenki / Roscosmos

Just one minute after launch, the rocket was already reaching supersonic speeds. A few seconds after going supersonic, the Proton-M rocket entered the region of Earth’s atmosphere known as maximum dynamic pressure, or more commonly as “Max-Q.”

Max-Q is where the rocket’s speed coupled with the density of the atmosphere work together to place the launch vehicle under the greatest amount of stress on its road “uphill.” After about two minutes mission elapsed time staging, the point where the spent first stage is jettisoned, occurred. The first stage, now drained of fuel  was then released and left to smash into the deserted steppes of Kazakhstan below. All total – they burned for about three-and-a-half minutes.

Each Proton stands in at an impressive 174 feet (53 meters) in height and was initially developed as ballistic missiles meant to send 100 megaton nuclear warheads more than 8,000 miles (13,000 kilometers).

During the highly-competitive days of the “Space Race,” Vladimir Chelomei’s engineers developed the booster as a response to Sergei Korolev’s massive N-1 booster (in the end, the N-1 flew three times – each of them ending in failure). The Proton has a long and storied history with one of the launch vehicle’s being used to deliver the first segment of the International Space Station, Zarya,  into orbit back in 1998.

The Russian Proton-M/Briz-M rocket was first launched in the configuration which flew today some five years ago in 2009. As mentioned, the launch vehicle uses 6 RD-276 engines in its first stage. The second stage uses 4 RD-0210 engines. The third stage uses a lone RD-0212 engine.