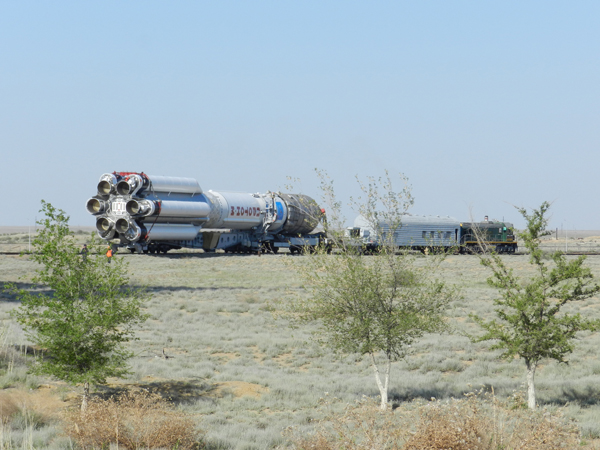 The Proton M rocket is led by rail to the Launch Complex at the Baikonur Cosmodrome. Photo Credit: Khrunichev

Following a successful launch last month, the Russian Proton Breeze M rocket is set to thunder off of the launch pad at the Baikonur Cosmodrome LC-200 this Friday, May 16. The launch is slated to take place at 3:42 a.m. ALMT. This particular Proton rocket will carry the Express-AM4R satellite into orbit for the Russian Satellite Communications Company (RSCC).

This week’s launch was originally scheduled to take place early last month but was delayed due to repairs of the 200/39 Launch Complex (LC) that were underway.

At 4:30 a.m.  (Moscow Time) on May 13, the Proton M/Express AM4R launch vehicle (ILV) along with its payload of the AM4R spacecraft were rolled out to the pad in preparation for Friday’s flight. The fully assembled rocket traveled horizontally by rail from its vehicle assembly building to one of the two commercial launch pads capable of handling the Proton M. Once at the launch pad, it was installed, erected into the vertical position. Pre-launch operations are now underway to prepare the vehicle for flight.

Everything appears to be proceeding apace according to a statement issued by International Launch Services, the launch service provider for this mission: ILV prelaunch processing at LC is scheduled to be completed within three days. Today specialists from Khrunichev and other Roscosmos entities will be carrying out operations as per Countdown Day One Schedule.

The AM4R satellite is the third in the series of Express satellites launched in 2014 alone, following the successful launch of the Express AT1/Express AT duo on March 16. ILS provided the following details about the satellite.

Express AM4R is built by EADS Astrium for the Russian Satellite Communications Company (RSCC) under the RF Federal Space Program for 2006 – 2015. With a mass of approximately 5775 кg, the satellite is built on the Eurostar 3000 platform. It carries 63 transponeders in С-, Кu-, Ка-, and L- bands and 10 antennas to provide sustainable coverage across the entire territory of Russia and CIS.

This spacecraft was built to replace the Express AM4 communications satellite that was lost in August of 2011. For this reason, the “R” in its name stands for reserve.

ITAR-TASS stated the following regarding this mission: Express-AM4 was launched from Baikonur in the early hours of July 18, but contact with the satellite was lost. The satellite never reached the designated orbit, and Space Communications, which ordered the launch, had to admit the loss of its satellite. Express-AM4 was supposed to become the most modern and powerful satellite in Europe and provide Russia with digital television and satellite Internet service. Even more powerful than its larger predecessor, AM4R will provide high-performance coverage for the Russian Federation and nearby regions with its steerable antennas. These antennas will be able to provide long-distance communications from any point on Earth within the satellite’s view, this according to an Airbus release about the Express satellites.

“The construction of the same satellite with the same blueprints will be the quickest way to replace the lost satellite,” Space Communications Deputy General Director Yevgeny Buidinov said. “Until then, the position of 80 degrees East may be used by international or foreign satellites,” he added.

With a launch mass of more than 5,700 kg and electrical power up to 16 kW, the AM4R satellite is designed to provide up to 15 years of service in Earth’s orbit. As of January 2014, Airbus Defence and Space came together from the former EADS divisions of Astrium, Airbus Military, and Cassidian that had built the Express satellites.

With a reliability record listed as being more than 95 percent, the Proton Breeze M rocket that will be carrying this communications satellite into orbit this Friday stands at an impressive 191 feet ( 58.2 meter ), including its standard commercial 4.1 meter fairing. The launch vehicle is unique in the fact that it has the capability to lift more than 6 metric tons and is equipped with a restartable upper stage.

The ILS website describes the Proton Breeze-M as follows: With Russian Federal and ILS missions combined, Proton launches about 12 times a year. This gives the Proton launch vehicle the best launch tempo in the industry.

The Proton family of launch vehicles is viewed as one of the more reliable rockets currently in service. Especially for missions such as AM4R. This is due not only to Proton’s restartable upper stage, but also because it is highly compatible with most major commercial spacecraft platforms that are used for single and multiple launches. The Proton-M can not only be used for hoisting satellites into orbit – but other critical mission components as well – including elements of the International Space Station An artist’s interpretation of the Express AM4R satellite in orbit. Image Credit: Airbus Defence and Space

The Breeze M (or just M) designation of this rocket denotes a small piece of the rocket’s core between the third stage and the payload fairing which houses the satellite.

The significance of this addition to the upper stage: “allows launching heavier spacecraft with higher center of gravity locations, and even allows for launching multiple spacecraft.”

Manufactured by the Khrunichev State Research and Space Production Center of Moscow, the Proton Breeze M had its very first launch 49 years ago. They were first developed as ballistic missiles in order to launch 100 megaton warheads over a range of 8,000 miles (13,000 kilometers).

According to the ILS website, “the maiden flight of the Proton rocket took place on 16 July 1965. The launcher’s lead designer, Vladimir Chelomei, initially designed it with the intention of creating both a powerful rocket for military payloads and a high-performance ICBM. The program was changed, and the rocket was developed exclusively for launching spacecraft. The original name of the launch vehicle was UR-500, but it adopted the name ‘Proton,’ which also was the name of the first three payloads that the rocket launched.”

In addition to its commercial payloads, the Proton M also delivers about three to five Federal payloads at both the Baikonur and Plesesk Cosmodromes each year. If Friday’s launch is successful, it will be the 397th overall launch of the Proton launch vehicle.