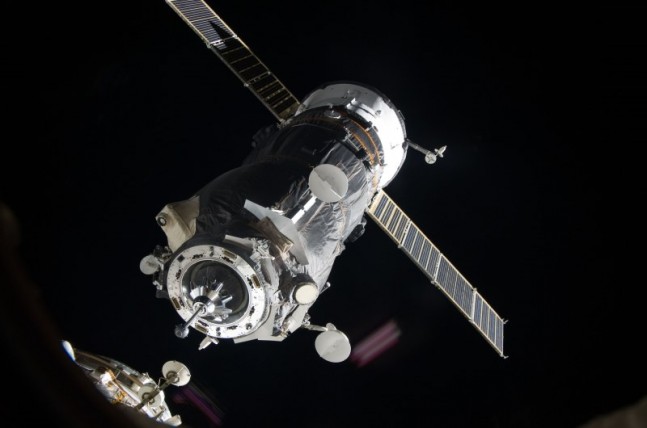 Russia is preparing to launch the Progress M-23M resupply vessel to the International Space Station. Liftoff is currently slated to take place from the Baikonur Cosmodrone in Kazakhstan on April 9 at 11:26 a.m. EDT (1526 GMT). Photo Credit: NASA

A Russian Soyuz launch vehicle is being readied to launch the Progress M-23M (Progress 23) to the International Space Station (ISS). Liftoff is currently slated to take place from the Baikonur Cosmodrone in Kazakhstan on April 9 at 11:26 a.m. EDT (1526 GMT). This will mark the second flight of 2014 for Russia’s unmanned cargo resupply vessel.

The Russian Federal Space Agency or “Roscosmos” has moved the Soyuz rocket out to the pad and begun processing it for tomorow’s flight. The rocket and spacecraft “stack” were transported out to the launch pad via rail and then were raised into the vertical position. The Progress M-23M spacecraft will deliver more than 4,000 lbs of cargo to the International Space Station. Photo Credit: Energia

There are more than 4,300 lbs of assorted cargo on this Progress representing a mixture of crew supplies, water, propellant, experiment components and spare parts. The Soyuz rocket which Progress will ride has four strap on kerosene-fueled rocket boosters which surround the core engine itself. A couple minutes after liftoff and these boosters are jettisoned, falling back to Earth and impacting the Kazakh Steppes. As mentioned, Progress 23 is an unmanned version of the crewed Soyuz spacecraft. The Progress spacecraft can also be used to boost the space station’s altitude as well as control its orientation. This is accomplished by firing the thrusters located on the spacecraft. If everything goes according to plan, the Progress spacecraft will dock to the ISS some six hours after launch. Photo Credit: NASA

Each of the Progress M and M1 variants are comprised of a pressurized Cargo Module, a Refueling Module (where propellant and pressurized gases are stored) and an Instrumentation/Propulsion Module (which is where spacecraft’s thrusters and flight systems are housed).

The Progress spacecraft is normally docked at either the station’s Zvezda Service Module or Pirs Docking Compartment. If everything goes according to plan, it should take the Progress 23 cargo vessel approximately six hours to reach the space station.

However, as the March 25 launch of the Expedition 39 crew atop a crew-rated Soyuz spacecraft proved, this is not always the case. NASA astronaut Steve Swanson along with Russian cosmonauts Alexander Skvortsov and Oleg Artemyev were forced to return to the prior route of travel after their Soyuz spacecraft malfunctioned. In essence, a six-hour trip was extended to one lasting some two days.

Progress 23, through an automated process, will rendezvous and then dock with the orbiting laboratory. To ensure safety, once the Progress 23 spacecraft is within about 500 feet (150 meters) away from the ISS, the Expedition 39 crew, as well as flight controllers on the ground, will monitor its approach and docking.

The Progress spacecraft uses the automated, radar-based Kurs system to dock with the ISS. A TORU manual docking system is on board the space station in the Zvezda module which serves as a backup to Kurs. An issue with a similar TORU system caused the Progress M-34 spacecraft to strike the Russian space station Mir in June of 1997. After Progress 23′s mission is complete, it will be filled with trash the day prior to the launch of the next Progress spacecraft bound for the ISS. The crew on board the station will then close the hatches and commence with undocking procedures. After it has departed the station, Progress 23 will then activate its thrusters which will place it on the path to conduct a fiery and destructive reentry into Earth’s atmosphere where it will burn up somewhere over the Pacific Ocean. RKK Energia uses the same basic launch vehicle and spacecraft design for both crewed and uncrewed missions (with the versions designed to ferry astronauts to orbit given extra-added redundancy).

It was recently announced that the International Space Station would have its service life extended four years through 2024 (with further extensions likely).

The first elements of what would become the ISS were flown to orbit atop a Russian Proton rocket and the space shuttle Endeavour in 1998 on STS-88. However, as recent international events have shown, the station’s position – is not as stable as it was just a few months prior.

Since Russia’s actions in the Crimea, NASA has severed much of the ties that it once had with the Russian Federal Space Agency. Although this excludes those operations involving the International Space Station – relations between the two space agencies are currently at a low point.

A recent statement by Russia’s Deputy Foreign Minister, Sergey Ryabkov, which appeared on the website, Space-Travel.com summarized the nation’s feeling about NASA’s recent move as such:

“We regret that the US administration and those who make such decisions are unable to conduct obvious situational analyses and separate US long-term interests from some ongoing short-term goals,” Ryabkov said.

This view was reinforced by comments made by Aleksandr Koptev with the Russian Space Research Institute (IKI RAN) who stated that by dropping ties with Russian space groups that NASA:  “… making such a decision they only harm themselves.” The Soyuz rocket with the Progress spacecraft is delivered to the launch pad via rail. Photo Credit: Energia