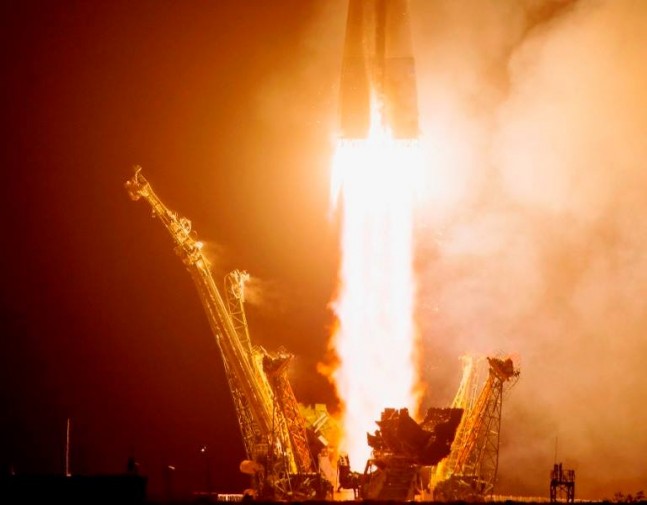 Progress M-24M successfully launches atop a Russian Soyuz-U rocket, on its way to the ISS. Photo Credit: NASA/Roscosmos

This is the third Progress supply mission of 2014, following M-22M, which launched in February, and M-23M, which launched in April. Having spent three months docked to the ISS’ Pirs module, Progress M-23M separated from the station at 5:44 p.m. EDT (2144 GMT) on July 21, stuffed full of trash and other unwanted items by members of the six-man Expedition 40 crew. Progress-23M is now heading toward its planned destruction in a high-temperature plunge through Earth’s atmosphere on August 1 – but not before it carries out several days of experiments in the Radar-Progress series. These are designed to learn more about how operation of the vehicle’s thrusters affects the density, temperature, and composition of the surrounding ionosphere. As one Progress departed the orbiting laboratory, another was being readied to take its place. M-24M’s journey into orbit began sedately, back in February, with its delivery by railroad to Baikonur. Weeks of final checking of the spacecraft’s systems and space-worthiness followed, before the ship was fueled, rolled out to launch site 1/5 at Baikonur, safe within the payload shroud of its Soyuz carrier on Tuesday (July 22), and raised into a vertical position ready for launch.

Once on the pad, the Soyuz-U was loaded with RP-1 (a highly-refined form of kerosene) fuel and liquid oxygen to supply the central RD-118 core engine and its four RD-117 strap-on boosters with propellant. At 3:44 a.m. Baikonur time, the rocket began its ascent, passing through the point of maximum aerodynamic stress within the first minute of flight.

At T+118 seconds and an altitude of approximately 28 miles (45 km), the four strap-ons, their fuel exhausted, fell away on schedule. They then plunged back to Earth where they impacted with the Kazakh steppes.

Shortly after, the escape tower and payload shroud were discarded, with the core engine alone still firing to boost the vehicle to a greater speed and altitude. At T+4 min 50 seconds and at a height of 105 miles (170 km), the core engine, its fuel spent, fell away, leaving the third stage RD-0110 engine with the task of lifting Progress M-24M the rest of the way to the proper heading for its destination.

Having successfully achieved its target orbit of 120 x 152 miles (193 x 245 km), with an inclination of 51.6 degrees to the equator, Progress began deploying its solar arrays and telemetry system. Two maneuvering burns during each of its first two orbits will, if all goes to plan, place the supply ship on a ‘fast rendezvous’ path to the ISS. Automated rendezvous and docking with the station, at the Earth-facing port of the Pires module is scheduled for 11:30 pm EDT, just five-and-three-quarter hours of the launch from Baikonur – close to the record time for this trip.

Progress M-24M is delivering about 5,500 pounds (2,500 kg) of supplies and equipment to the Expedition 40 crew. Also on board are a couple of dozen snails – future participants in a study known as Regeneration-1 that investigates how living things adapt to microgravity. The supply ship is expected to remain attached to the orbiting outpost until October 27.