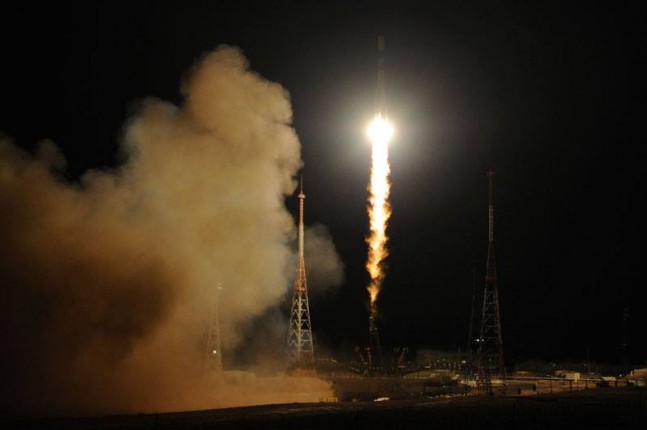 The Progress 54 spacecraft was launched from the Baikonur Cosmodrone at 11:23 a.m. EST (1623 GMT). It is set to dock with the International Space Station in about 6 hours time. Image Credit: Roscosmos

The spacecraft and its Soyuz launch vehicle were rolled out to the pad on Monday, Feb. 3 in the early morning hours. The intervening two days saw the rocket and spacecraft readied for launch. Progress will now travel to the orbiting laboratory delivering more than 5,600 lbs of cargo, including, propellant, experiments, spare parts and supplies for the Expedition 38 crew. The crew also received something else from today’s launch – a unique view of liftoff. Progress 54 is carrying about 2.8 tons worth of cargo including spare parts, propellant, experiments and crew supplies. Photo Credit: NASA

From their vantage point some 250 miles above the Earth and having just passed over Baikonur Cosmodrone just two minutes prior to launch, the Expedition 38 crew members got to watch the night sky down below light up as the Soyuz rocket roared to life, and set Progress 54 on its way to orbit. NASA flight controllers recommended that the crew look out of the Cupola for the best glimpse of Progress’ flight into the black. Expedition 38 flight engineer Rick Mastracchio reported that they had a good view of the launch for the first couple minutes.

The flight went very smoothly with normal calls taking place at the predicted times as the spacecraft traveled out of Earth’s gravity well.

Roscosmos uses a variant of the iconic Soyuz rocket which the organization employs to send crew to the space station as well as to launch Progress missions. In fact, Progress is itself a version of the Soyuz spacecraft which is currently the only means for crew to reach the ISS since the retirement of NASA’s space shuttle fleet back in 2011. The Russian Progress 54 spacecraft carries a wide range of needed equipment for the space station as well as supplies for the station’s crew. Photo Credit: NASA

The Soyuz launch vehicle has four liquid-fueled (kerosene and oxygen) boosters which are affixed to the core stage of the rocket. A couple minutes after launch, these were jettisoned, falling back to Earth and impacting on the steppes of Kazakhstan. Shortly afterward the spacecraft’s fairing, which protected Progress 54 through Earth’s atmosphere, was also jettisoned.

Progress 54 is comprised of three core elements, the Pressurized Cargo Module, Refueling Module and Instrumentation and Propulsion Module. The spacecraft can be used to raise the International Space Station’s altitude or to adjust its orientation via Progress’ thrusters. When at the space station, Progress is either docked to the Zvezda Service Module or Pirs Docking Compartment.

It will take the Progress 54 spacecraft about six hours to reach the space station after launch. It will travel to approximately 500 feet (150 meters) from the ISS at which point the crew on board the space station along with flight controllers on the ground will monitor the final leg of the cargo vessel’s journey which will be guided in via Kurs, an automated radar-based system. If things go awry, the crew on board the station can take control of Progress 54 via a manual TORU system which is located in the station’s Zvezda Service Module.

Progress did not always have such a swift trip to the space station. Before the Progress M-16M launch on August 1, 2012, these flights took about two days from launch to arrival at the station. Prior to the launch of Progress 54, another of these spacecraft, Progress 52, which was already at the ISS, was undocked and directed toward a destructive reentry into the Earth’s atmosphere. Photo Credit: ESA / NASA

Once Progress 54’s mission is complete it will be loaded with garbage the day prior to the launch of another cargo resupply vessel (either Progress 55 or 56).  After Progress 54 has been loaded up with trash, the crew will close the hatches and commence with undocking procedures. Once the spacecraft is a safe distance away it will conduct deorbit thruster firings which will place it into a trajectory to burn up in Earth’s atmosphere high above the Pacific Ocean.

The same procedure was seen a few hours prior to Progress 54’s liftoff as the Progress 52 cargo vessel bid farewell to the outpost and began it’s destructive descent back to where its journey had started last year.

As the spacecraft’s name implies, there have been some 54 Progress launched today, with the first traveling to the ISS in 2000.

The International Space Station is currently playing host to members of the Expedition 38 crew which consists of: Commander and Russian cosmonaut Oleg Kotov, as well as Flight Engineers: NASA astronauts Rick Mastracchio and Michael Hopkins, Japan Aerospace Exploration Agency (JAXA) astronaut Koichi Wakata and Russian cosmonauts Mikhail Tyurin, and Sergey Ryazanskiy. The ISS program is, as the name implies, a global affair with 16 different nations contributing to the effort.