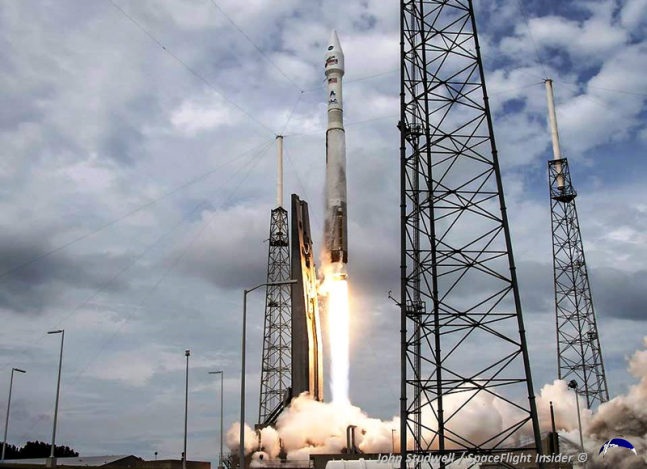 CAPE CANAVERAL, Fla  — It’s always harrowing when you do something for the first time. Representatives of The SpaceFlight Group’s news arm, SpaceFlight Insider, found that out during the launch of a ULA Atlas V 401 rocket on Nov. 18, 2013 from Cape Canaveral Air Force Station in Florida. At the time of launch, SFI was not even two months old. We worked to provide the public with the same depth of reporting as outlets with far longer histories. Simply put? Things could not have gone better and it was apparent that the team that has coalesced under our banner – are some of the best in the business. John Studwell is no rookie, he has shot photos covering the Jacksonville Jaguars, the launches at Cape Canaveral and much more. He stepped up to provide assistance to the greenest remote camera photographer of all – myself. Remotes are the cameras that bring the public the stunning imagery from the pad. usually a day or so prior to launch, photographers are escorted out to the pad from which the spacecraft will begin its mission from. In this case, it was Space Launch Complex 41. Once the site where Titan rockets roared to orbit, the historic location now is the site where the venerable Atlas V launch vehicle is employed to deliver a wide range of probes, rovers and satellites to their various destinations.

The Mars Atmosphere and Volatile EvolutioN or “MAVEN” spacecraft was now perched atop Atlas awaiting its date with destiny. I nervously fretted over the Canon camera, the trigger that would activate it during launch and the plastic bag and coffee cup, which were the camera’s only means of defense against the turbulent Florida weather. I felt a hand on my shoulder, it was John. “I’ve been doing this for years, it will either work or won’t – you’ve done all you can do,” with those words he was on his way to take care of his own remote cameras, of which he had three. I felt more than a little inadequate, with only one. The media were then escorted around the perimeter of the rocket (the seasoned professionals who cover these launches have their favorite spots and are always trying to find new ones to wow the public with), along the way myself and others would occasionally snap a pic or two of the majestic rocket sitting quietly on the pad. Remote setup took place on Saturday Nov. 16 and the following day NASA had a string of events with NASA Administrator Charles Bolden and we were all trying to figure who would cover what and when. Remotes went smoothly, business as usual when dealing with United Launch Alliance. Many of the photographers worried about the upcoming launch of a SpaceX Falcon 9 rocket from nearby Space Launch Complex 40 (these fears were soon confirmed as it was revealed that there would be no remote cameras for the upcoming launch of SES-8).

United Launch Alliance and NASA hosted several events in the lead up to launch and in so doing allowed the public a look at the Atlas V rocket up close and personal. It was a good thing too as it would be the last time that people will have a chance to see the spacecraft. For The SpaceFlight Group, the launch was our chance to see if our efforts two days prior would come to fruition. All of the remotes we had set up produced imagery (which is what you see here). The team congratulated one another, sensing that MAVEN would be just the start of what we would be able to bring to the public. The Group’s Senior Photographer, Mike Howard, summed it up simply: “We did it!”