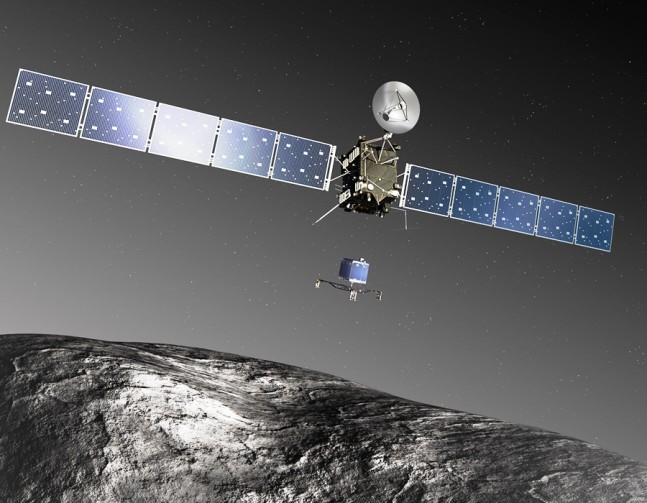 Forty-five years ago, people all over the world gathered around their televisions to watch the first lunar landing. This past week, on Nov. 12, people huddled around laptops, sitting on the edge of their seats, watching what would be the first landing on a comet. Following a ten-year journey across the solar system, and against all odds, a robotic lander touched down on the surface of a comet 300 million miles away. The European Space Agency’s (ESA ) Philae lander survived a seven-hour free fall to the surface, bounced twice and was ultimately able to complete its primary science mission before being forced into hibernation.

Launched in 2004, the European-led Rosetta mission was an ambitious one, being the the first to rendezvous with and land on a comet. Its target, a duck-shaped ball of ice and rock, named comet 67P/Churyumov-Gerasimenko is speeding towards the Sun and carrying with it, the secrets of the early solar system.

Named for the tools that helped decipher ancient Egyptian hieroglyphics, Rosetta and Philae aim to unlock the inner secrets of comets and their role in the development of our solar system.

Rosetta arrived at its destination in early August, and has been delivering unprecedented images and data ever since.

So far, scientists have learned what a comet smells like, heard it “sing,” and are expected to learn much more in the coming months.

After careful analysis, a landing spot was selected from a pool of ten potential places. Officially dubbed Agilkia, the intended landing spot was located on the comet’s head in a well-illuminated area. Philae’s first panorama as seen by its CIVA instrument. An illustration of the lander has been added for context. Image Credit: ESA

Philae, the washing-machine-sized lander, is equipped with a primary and a secondary battery, making it able to power itself for approximately 56 hours. The lander is also equipped with solar panels that would recharge the batteries, allowing for extra science to be conducted. After a seven-hour free fall to the comet’s surface, researchers were relieved to hear from Philae. After subsequent analysis, they were surprised to discover that not only did Philae land once, but three times. The plucky little lander bounced twice, and unfortunately ended up in the shadows.

As a result, Philae’s days were numbered. With limited sunlight reaching Philae’s solar panels, researchers knew they had to make the most of the time they had. For nearly 60 hours, each of Philae’s 10 science instruments worked hard to gather as much data and intel as they could. On the evening of Friday, Nov. 14, researchers reconnected with Philae for what would be the final time. At that time, 11:23 p.m. CET (5:23 p.m. EDT), the ground team received a wobbly signal at first, but it soon stabilized, allowing the download of hours of precious science data. The first data to come down was housekeeping data, followed closely behind by data from the COmetary SAmpling and Composition (COSAC) instrument. The team was elated to discover that Philae’s drill fully extended; however, we won’t know for a few days if it was able to penetrate the comet’s surface.

Once all the science data had been downloaded, the team decided to rotate the lander, moving the largest solar panel into the sunlight. At this point, Philae’s fate was sealed. This move would not prolong its life, but would provide an opportunity for Philae to wake back up in the future. While we wait and hope for Philae to one day wake up, we will continue to monitor Rosetta and learn all we can about comet 67P.