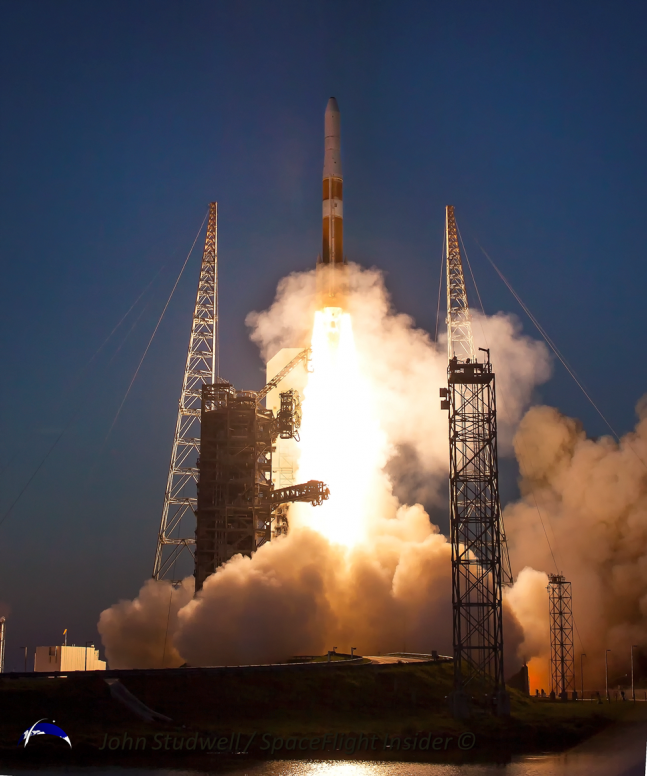 CAPE CANAVERAL, Fla – Covering the space program forces one to deal with the dichotomous world that is aerospace. Dark and light, good and bad, wet and dry… Yeah, that last one might seem odd – but it is very relevant given the past few days. The great thing about launches of Delta IVs – is that we come out and set up remotes and watch the massive Mobile Service Structure which encapsulates the launch vehicle – less than a day (under optimal conditions) before launch. Trust me, it normally simplifies matters. In terms of the launch of the GPS IIF-6 satellite however – this was not the case. Arriving at the U.S. Air Force Space and Missile Museum, just outside the gates of Cape Canaveral Air Force Station at 8:30 a.m. EDT on May 15, I met with the other members of the SFI team to prepare the cameras which would be emplaced at Space Launch Complex 37B. The weather conditions only provided a 30 percent chance of favorable conditions for launch that day – but at that time? The weather conditions were good – blue skies, a light breeze with only partial clouds. Some of the photographers in attendance laughed at the weather predictions. A little afternoon and clouds could be seen on the horizon.

Opting to make this a one-day affair – I went back to SFI Senior Photographer Mike Howard’s condo and crashed. Shortly after shutting my eyes – I noted the tell-tale sounds of rainfall – which inexorably built into a steady roar. Throughout the day, the predicted weather patterns arrived and it became obvious that there would be no launch that day.

Still, one never knows, hoping that the weather would calm down enough to allow the flight to proceed as planned. Arriving at the U.S. Air Force Space and Missile Museum right on time and realizing that an umbrella was an essential piece of equipment – it was with resignation that the team entered the museum and awaited the bad news. The 45th Space Wing’s team, led by Chris Calkins, was not deterred and soldiered on. As usual, we convoyed out to the causeway to view the launch. However, upon reaching the gate that marks the entrance to our procession, we were made to wait by CCAFS security. Not unusual, however I was a little stressed as I’d just received word that a Russian Proton rocket had failed, causing the loss of it as well as the AM4R telecommunications satellite. This was a high-priority news event, one which I was struggling to get handled with the current goings-on. Luckily several SFI contributors stepped in and got it covered. About this time I noted that the cars in front of mine were turning around and heading back the way they had came – SCRUB. Discretion being the better part of valor and having a fully-fueled launch vehicle tap dance around lightning strikes – ULA opted to wait out the storm. Launch would now take place on the following day.

On May 16, the team reassembled – under mostly clear and cool skies. For the better part of the day, the situation was one dubbed by pilots as “severe clear” – as there wasn’t a single cloud in the sky. The launch followed the normal procedure, with the rocket emitting flame as the clock down to zero and the Delta IV lifting off from the pad at the very opening of the day’s launch window.

With the lift off time being 8:03 p.m. EDT, the dimming Sun caused the contrail to turned magnificent colors of purple, grey, red, orange and yellow. The roar of the RS-68 and the two GEM-60 solid rocket boosters was shocking. At just 1.6 miles away – the power was beyond impressive. Company representatives explained that the Delta IV Medium+ 4,2 has enough power on its own to deliver its payload directly where it is heading – without the need to have it enter into a Geostationary Transfer Orbit or “GTO.”

As the colors of the Delta IV’s contrail deepened with those of the evening, one important fact was driven home – performance matters. My wife and I were just in Florida for a vacation and FINALLY got to see our first launch–this one! We were in Titusville and watched it from the east side of the Garden street bridge. Beautiful! Were got situated about 20 minutes before launch. I found it interesting that about 3 minutes before hand all of a sudden cars start pulling off the road, the rocket launches, flys for a few minutes, then those same cars load up and drive away. I guess it’s a “locals” thing. Third time was the charm. We were in Florida in ’87 for our Honeymoon, but nothing was flying as it was 18-months after CHALLENGER. In ’02 we were there with our boys and if the rain would have held off 30-more minutes we would have seen a shuttle landing. I guess that’s the space biz!