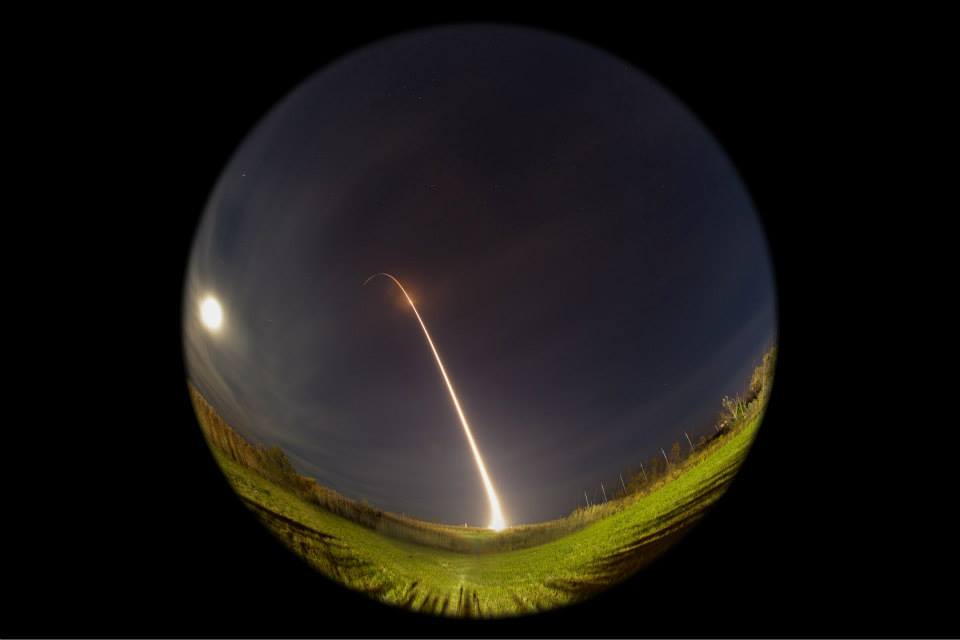 Orbital Sciences Corporations’ Minotaur 1 rocket leapt into the night’s sky on Tuesday, Nov. 19 carrying with it the Operationally Responsive Space (ORS-3) payload. Everything did not go according to plan however; the launch was delayed due to a technical issue that cropped up during the first launch attempt at 7:30 p.m. EST.  The official launch time was 8:15pm EST where some 30 seconds later, the ascending rocket could be seen all along the Eastern Seaboard up through parts of Canada.

Contrary to some reports, space weather, in the form of an X-1 class solar event that day – were not to blame with the launch’s delay. While X-1 events are among the most powerful emitted by the Sun and play havoc with electronics, according to representatives with NASA, they had no impact on the rocket’s launch whatsoever.

“Reviewing space weather is one of the launch criteria that we have to review,” said NASA spokesperson Keith Koehler. “However, once they took a look at it, they realized that it wasn’t a problem at all and it played no part whatsoever in the delay of last night’s launch.” The real issue was technical in nature. A downrange tracking hardware problem at the Coquina, North Carolina station was the chief culprit in last night’s delay. If something would have gone wrong with last night’s flight, the tracking station at Coquina would have sent the signal that would have activated the Minotaur 1’s Flight Termination Software – which destroys the rocket and prevents it impacting population centers.

“We also had a boat that the Coast Guard had to get out of the area of operations, but that also had no impact on the launch time,” Koehler said. Liftoff took place at NASA’s Wallops FLight Facility’s Pad-0b at the Mid_Atlantic Regional Spaceport about 45 minutes into the launch window. Contrary to some reports, the launch was not delayed due to solar activity. Photo Credit: NASA

At 8:25 p.m.  EST the Minotaur I rocket thundered aloft at blinding speed. Within approximately ten minutes after liftoff it had already deployed the STPSat-3 and was on its way to deploying all 29 (yes 29 satellites total road Orbital’s Minotaur into orbit) of the satellites onboard.

The Minotaur 1 is a descendant of the United States Intercontinental Ballistic Missiles. In this case the full “stack” consisted of four stages – each of which pushed the various spacecraft aboard to their destinations.

This launch set a current record for the most amount of satellites launched at once.

One of the more notable satellites to be carried to orbit on this mission was the TJCubeSat, built by the students of Thomas Jefferson High School. The students involved with the TJCubeSat cheered as the focus of all their hard work took to the skies. TJCubeSat had been the product of several years of work in conjunction with Orbital.

The students’ primary objective is listed as: “providing educational resources to other K-12 education institutions to inter interest in aerospace through the successful design and flight of a CubeSat.”

There were also universities involved with 11 of the 28 CubeSats that launched aboard the Minotaur 1. The Minotaur 1 rocket could be viewed along a large swath of the U.S. Easter seaboard and into Canada. Photo Credit: Elliot Severn / SpaceFlight Insider

”Cubesats offer our best and brightest young minds the opportunity to discover the excitement of space exploration while confronting the tough technology and engineering challenges surrounding spaceflight,” said Leland Melvin, NASA’s associate administrator for education in Washington. “By opening the space frontier to a new generation of scientists and engineers, we encourage students to pursue careers in science, technology, engineering and mathematics.”

Also on board was the U.S. Air Force’s Space Test Program Standard Interface Vehicle (STPSat-3) built by Ball Aerospace, which was the second of two interface vehicles, launched only 3 years apart to the day. For this mission, Ball adapted the spacecraft to fit 6 independent payloads—which is 2 more than the typical amount. The satellite is the size of a mini refrigerator, but will be doing a lot more in orbit than keeping drinks cold.

The launch brought big aerospace companies like Ball Aerospace, Orbital Sciences Corporation, and ATK together with students, all with the common goal of advancing spaceflight toward the future. In the upcoming months, the satellites will be working towards minimizing the time spent on certain launch and flight procedures and cutting costs. This mission could mean a revolutionary change in both technological advancements and the inspiration needed to get others involved in spaceflight. Steven A. Smith, director of Military Space at Ball Aerospace poses with a model of the STPSat-2, the predecessor of the STPSat-3 that flew on the ORS-3 mission. Photo Credit: Britt Rawcliffe / SpaceFlight Insider

“We had the Autonomous Flight Safety System on ORS, it’s an enabling technology designed to improve range-safety operations,” said the Senior Manager of Communications for ATK’s Missile Products Systems Jennifer Bowman. “In fact, the delay that we experienced before the launch, was caused by one of that string-of-pearls radar systems that we have along the coast had some issues and all of them have to be working, along with all of their redundant systems before we can have a launch. AFSS takes that need for that ‘string-of-pearls’ – out of the loop. The data collecting for range, position, trajectory, all of that – would be onboard the rocket, using GPS.”

While both the launch vehicle and its charges might have been relatively small, the potential impact on developing new space technologies could be profound.

“The advancements of the cubesat community are enabling an acceleration of flight-qualified technology that will ripple through the aerospace industry,” said NASA’s Advanced Exploration Systems Division, Jason Crusan. “Our future missions will be standing on the developments the cubesat community has enabled.”

ORS-3 also consisted of a smartphone, reworked to become “PhoneSat 2.4.” This was the second-generation smartphone cubesat. Phonesat was sponsored by NASA’s Space Technology Mission Directorate. Phonesat 2.4 will test out if communication technology can be used in nanosatellites as well as to see if it can manage pointing, taking images and software execution. Phonesat two has a two-way radio which provides it with two-way communication. It is hoped that the solar arrays will allow the tiny spacecraft to remain operational for about a year. Without-a-doubt, students were a massive component of the ORS-3 mission. More than 300 budding scientists participated in preparing the 11 cubesats for their missions. Besides those at Thomas Jefferson High School, they included:

— University of Alabama, Huntsville, Ala.,

— The University of Louisiana, Lafayette, La.

A NASA release also noted that this was the first launch to employ a Nanosatellite Launch Adapter system (NLAS). This helps to deploy the tiny spacecraft and was built by Ames Research Center.

ORS-3 was launched to help enable future space technologies as well as to inspire future scientists and engineers. For the son of two teaches, Melvin was humbled by what he saw taking place around him.

“It’s incredible how these kids are building spacecraft, at their age I thought it was something to build a skateboard,” Melvin said, shaking his head with a smile. “Back in the day, I thought that was really something, but here they are building something that has gone into orbit!” Students and alumni of Thomas Jefferson High School listen to a presentation given by Leland Melvin before the ORS-3 launch. Photo Credit: Britt Rawcliffe / SpaceFlight Insider