Orion service module back on track for 2017 launch 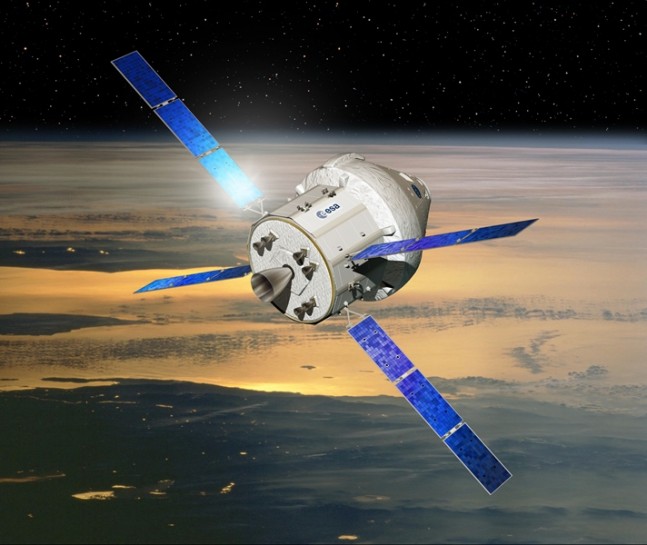 After some delays, the European-built service module for the new Orion crew-transport vehicle is now back on track and should be ready for a test launch of Orion in late 2017.

“The preliminary design review for the service module has been successfully concluded and that is a key milestone in the consolidation of the schedule,” according to European Space Agency Director-General Jean-Jacques Dordain.

The previous delays with the service module primarily had to do with excess weight, but that problem has now been solved.

ESA and NASA have a barter system agreement, where ESA provides needed services to NASA. In return, for ESA receives 8 percent use of common resources on the International Space Station. So far, ESA has provided Automated Transport Vehicle (ATV) launches to send fuel, water and other cargo to the station. NASA is also continuing its ISS resupply services contracts with both SpaceX and Orbital Sciences in the US.

It is expected that this agreement could extend beyond the current arrangement as well. This prospect has been voiced by NASA Administrator Charles Bolden, who states that the United States remains committed to a long-term partnership with Europe with regards to Orion:

“Europe and the United States have established a partnership with Orion and the service module that is unprecedented. The United States has never – ever, ever – partnered with another nation and said, ‘You’re on the critical path and I can’t do this without you.’” He adds, “And that’s exactly what we said, and we did it with intention because we wanted to send a message. People can pretend that they don’t hear the message, but we’re in this for the long run as partners.” Artist’s conception of the Orion spacecraft including the service module. Image Credit: NASA

As of 2012, ESA governments approved participation with the ISS until at least 2020. The fifth and final ATV launch, scheduled for July of this year, will cover ESA’s barter obligations until 2017. In order to extend their involvement until 2020, ESA will need to pay an additional 455 million euros ($623 million), which will be allocated specifically to the new service modules for Orion. It should be enough to build one complete module and parts for a second one.

But again, budgets are a bit of a problem. Only 250 million euros have been approved so far, the result of a debate between Germany, France and Italy over who should pay the operating costs for ISS through 2020. As to the remaining costs of 205 million euros, that will now have to wait to be settled at the next conference of ESA government ministers, scheduled for December in Luxembourg.

Germany, at least, is in full support of the continued agreement. According to Johann-Dietrich Woerner, chairman of the German Aerospace Center, DLR, “Germany is supporting this because our strategy is very simple. We would like to use [the station] as long as it is accessible.”

While hurdles have been cleared in the progress on the Orion service modules, the schedule is still a challenge. Development is no longer months behind schedule like it was before however, since the schedule was revised by ESA last November. The next major stage is the critical design review in late 2015. The first test launch is planned for only two years after that, which means there can’t be anymore significant setbacks or delays.

As of now though, things seem to be back on track for the service modules, which supply the essential propulsion and supplies for Orion; it’s a big step in getting American astronauts back into space.