Orion moves to PHSF in preparation for first flight 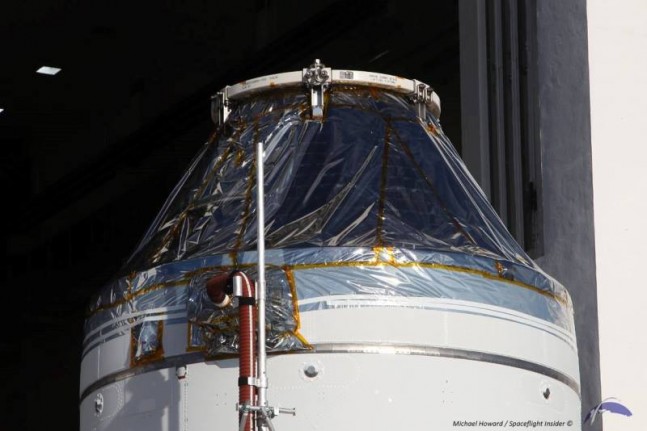 CAPE CANAVERAL, Fla. — NASA’s Orion spacecraft took its next giant leap towards space today, Thursday, Sept. 11. After departing from the Neil Armstrong Operations and Checkout Building, Orion preceded to make the mile-long journey to the Payload Hazardous Servicing Facility (PHSF) where it will be fueled for flight. Liftoff of Orion’s maiden voyage, Exploration Flight test-1 (EFT-1), is expected to take place at sunrise on December 4. During the initial test flight, the Orion spacecraft will orbit the Earth twice before splashing down in the Pacific Ocean.

At approximately 8:15 a.m. EDT (12:15 GMT), the Orion capsule inched its way out of the O & C building and began the short journey to the PHSF building. At the PHSF, Orion’s 12 thrusters will be supplied with hydrazine propellant, ammonia coolant, and helium pressurization systems. After the fueling process is complete, Orion will be moved again to another facility, where it will be fitted with the launch abort system. Once the spacecraft has been fully assembled and stacked, it will be over 80 feet tall. In mid-November, the spacecraft will then be ready to move to Space Launch Complex 37 (SLC 37), and placed atop the Delta IV rocket for final launch preparations. Orion Program Manager, Mark Geyer, said, “Nothing about building the first of a brand new space transportation system is easy, but the crew module is undoubtedly the most complex component that will fly in December. The pressure vehicle, heat shield, parachute system, avionics — piecing all of that together into a working spacecraft is an accomplishment. Seeing it fly in three months is going to be amazing.”

When asked about the day’s events and their importance, Kennedy Space Center director, Bob Cabana said, “There’s something about seeing a vehicle clear those doors, and know that it’s going on. Not since the Apollo days have we had a vehicle destined to travel beyond low-Earth orbit leave those doors. Today is a great day.”

Today’s move of the Orion capsule to the PHSF marks the completion, from an assembly standpoint, of the EFT-1 spacecraft. This is the vehicle that will take human exploration beyond low-Earth orbit. EFT-1’s main purpose is to test the basic operations and systems on the vehicle. After splashdown, the capsule will  be collected, refurbished, and used on an ascent and abort test in 2018. United Launch Alliance will provide the Delta IV Heavy for this mission. A heavy launch vehicle, like the Delta IV, is critical to providing Orion the boost it needs to achieve the proper velocity for this test. The rocket used during testing will be a typical Delta IV Heavy, consisting of a center core and two strap-on boosters, totaling over two million pounds of thrust. The heavy lift vehicle’s center core has two stages, with the first stage containing three Aerojet Rocketdyne RS-68A engines, fueled by hydrogen.

Approximately four minutes after liftoff, the two strap-on boosters will jettison, permitting the center engine to fire just over one additional minute before shutting down and igniting the second stage.  The rocket’s upper stage, an RL10B-2 engine, was connected today and will ignite around the six minute mark after launch. Moments later, Orion’s abort tower will fall away from the vehicle’s nose and the mock service module will jettison. The RL10 engine will fire a second time, approximately two hours into the mission, to ensure the spacecraft’s orbit reaches the targeted altitude of 3,600 nautical miles, before splashing down in the Pacific Ocean.

When asked how this launch differs from a traditional Delta IV Heavy launch, ULA East Coast Launch Operations Director, Tony Taliancich, said “For this launch, we will be running operations from liftoff through splashdown. This is not the norm for us.” In addition, ULA had to make some alterations to the pad in order to accommodate the vehicle. The actual Delta IV vehicle is similar to the Delta IV we are used to seeing, except when it comes to the nose cone — thanks to Orion’s launch abort system. Crews also had to add a swing arm to the fixed umbilical tower.

Technicians installed the ablative heat shield earlier this spring. The heat shield is one of the crucial systems being tested during EFT-1. When the spacecraft re-enters the Earth’s atmosphere, it will travel at speeds up to 20,000 mph and the shield will protect the capsule from temperatures of 4,000 degrees Fahrenheit.  During the shuttle era, 24,000 ceramic tiles were placed on the underside of each orbiter. Similar heat-absorbing black tiles have been added to the upper section of Orion’s crew module to further protect it. Scott Wilson, NASA’s Orion Production Operations Manager, said, “Orion is much larger than the Apollo capsule and comes in much faster than the shuttle ever did. Its large size and higher speeds means more heating on the capsule when returning from deep space. Part of the reason why we are doing this highly elliptical orbit is to simulate the speeds we would see returning from deep space.”

He went on to say, “When Orion is re-entering the atmosphere, it will be traveling at roughly 80 percent of the speed we would see returning from a lunar mission or from deep space. This will allow us to test out how the heat shield performs on the spacecraft and how the thermal protection and back shields function.”

Approximately 1,200 additional sensors were added to the capsule in order to accurately measure vibration, acceleration, temperature and pressure during the flight. The avionics and separation mechanisms will also be tested. Only one of the launch abort system’s three motors will be active during the flight — the one that jettisons the system from the capsule. All data collected will aid in the refinement of Orion’s design prior to next year’s critical design review. Just wondering; Many people were/are employed at Kennedy to assemble/build Orion. Are they going to build another capsule ?, if not, are these people going to be furloughed until they are needed again ?
NASA lost a huge talent base when they let the shuttle workers go, will this happen again ?

“Are” – yes, Orion is NASA’s next crewed spacecraft. It’s not a one-off. There are two planned flights in 2018, EM-1 and a launch abort test, so unless something changes – expect to see more of these spacecraft.