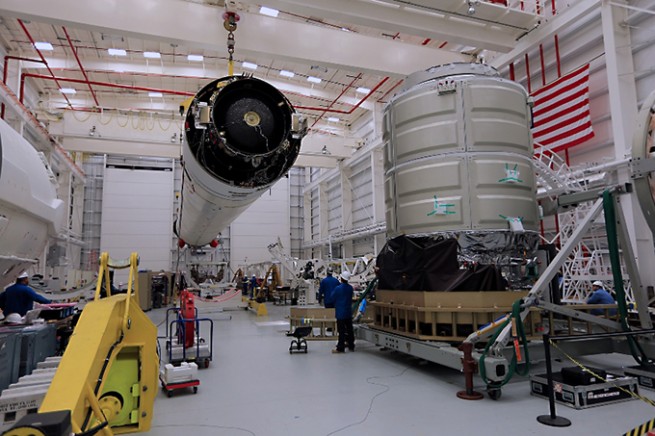 Antares with Cygnus being lifted to TEL. Photo Credit: NASA

The launch of an Orbital Sciences Corporation Antares rocket from the Mid-Atlantic Regional Spaceport (MARS) at NASA’s Wallops Flight Facility (WFF) has been slated to take place no-earlier-than December 19. This will be the first nighttime launch for Antares, with the window opening at 9:19 and extending through 9:24 p.m. EST. If all goes according to plan, the payload for this mission, the C. Gordon Fullerton (“Cygnus”) cargo vessel will be berthed to the International Space Station (ISS) on December 22.

This mission follows the successful Commercial Orbital Transportation Services (COTS) demo mission which launched successfully earlier this year in September. Orbital Sciences, along with Space Exploration Technologies (SpaceX), were the winners of NASA’s Commercial Resupply Services (CRS) contract, which enables both companies to transport cargo to the crews aboard the space station.

The planned flight, dubbed “ORB-1” will be the first of eight planned missions in which the Dulles, Virginia-based firm will send eight of the firm’s Cygnus spacecraft to the ISS. Each of these cargo vessels is capable of delivering 3,230 lbs (1465 kg) to the station. “After separation from Antares, Cygnus will deploy its solar arrays and undergo initial check-out. The spacecraft will conduct a series of thruster burns to raise its orbit to bring it within 4 km of the ISS prior to receiving authorization to autonomously rendezvous with the station. When the vehicle approaches to within 12 meters, the astronauts will use the station’s robotic arm to grapple Cygnus and berth it to the Harmony node of the station. Cygnus is planned to remain berthed at the ISS for 42 days during which time the station crew will load Cygnus with materials for disposal. At the end of the mission Cygnus will depart the station and reenter the Earth’s atmosphere.”

Like previous night launches out of Wallops Island, the Antares rocket and its stage separations will be very visible along the Eastern Seaboard Thursday night. Orbital Sciences has provided maps of Antares’ trajectory for those interested in viewing the rocket’s ascent.

The launch had been pushed back from its December 18 launch date due to concern for the coolant issue aboard the space station. Engineers were working the problems last evening to control temperatures in one of two cooling loops on board the outpost.

A Flow Control Valve located in the  starboard Pump Module which regulates the flow of ammonia which is used to cool the ISS stopped positioning itself properly last week forcing NASA engineers to scramble to not only troubleshoot for a possible solution – but to also see if the problem would impact the planned Antares launch. The coolant loop issue on the ISS saw the temperatures in Loop A  drop. This required that some of the support systems on the ISS to be shutdown. The Expedition 38 crew was never in any danger. However, temperatures within the loop need to be warm enough for the heat exchangers to dissipate excess heat through the ISS’s external radiators (according to a release issued by NASA). To compensate for this problem, the responsibility for handling these duties was handed over to Cooling Loop B last week. This pump, located on the station’s Port Truss is fully functional. NASA issued the following statement regarding its efforts to fix the problems on the ground:

Efforts overnight to fine-tune the position of an isolation valve associated with the flow control system in the Pump Module into a “sweet spot” to assist the faulty Flow Control Valve in regulating the affected cooling loop’s temperatures were still being evaluated as engineers continue to review the data, valve positioning techniques and additional methods of temperature management in the loop.

NASA has stated that it is working on two separate efforts simultaneously. The first is to have Expedition 38 astronauts Rick Mastracchio and Michael Hopkins conduct spacewalks starting as early as Thursday to replace the pump. The second of these efforts is to conduct the launch of Antares later that evening.

Orbital engineers located at Wallops continue to load time-sensitive cargo into the C. Gordon Fullerton spacecraft this past weekend to ensure that that possible launch on Dec. 19 and follow-on dates can be maintained. The fairing, which shields the spacecraft during ascent through the Earth’s atmosphere, will be put into place tomorrow (Monday, Dec. 16), this will prepare Antares for rollout to Pad-0A early Tuesday morning.

An update from Orbital states that “at NASA’s direction, Orbital’s Cygnus operations team deferred loading the mission’s final cargo into the spacecraft earlier today, postponing that operation by a day. Orbital will await NASA’s direction for the final cargo load tomorrow while the cooling loop issue aboard the ISS is being investigated. If we get the go-ahead to load the final, time-sensitive cargo on Sunday, roll out to the launch pad would be on Tuesday, December 17, launch on December 19, and rendezvous and berthing with the ISS on December 22.”

Please check back with The Spaceflight Group over the next few dates for updates regarding the launch. If all goes according to schedule, Antares will roll out to Pad 0A early Tuesday morning. Photo Credit: Jason Rhian / SpaceFlight Insider