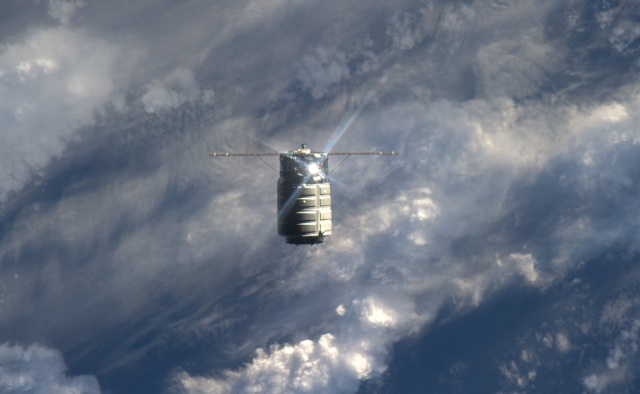 Orbital's Cygnus spacecraft has completed the Orb D1 mission and will be directed toward a destructive fiery reentry slated to take place tomorrow. Photo Credit: NASA

After spending some 23 days, at the International Space Station (ISS) Orbital Sciences Corporation’s Cygnus 1 spacecraft Orb D1 has been an almost complete success – and is drawing to a close. The Orb-D1 flight was a demonstration flight under NASA’s Commercial Orbital Transportation Services (COTS) contract. Tuesday, October 22, saw the Expedition 37 crew members Karen Nyberg of NASA and Luca Parmitano of the European Space Agency detached the cylinder-shaped spacecraft at 7:31 a.m. EDT. and set it on its way.

Cygnus 1, on its first mission, dubbed Cygnus Orb-D1, carried some 1,300 pounds (589 kilograms) of cargo to the orbiting laboratory. This included experiments produced by students, food, clothing and other non-mission critical items. Upon arriving at the station, Cygnus was grappled by Expedition 37 crew member, Luca Parmintano who berthed to the station’s Harmony module. Although Hawthorne, California-based Space Exploration Technologies or “SpaceX” has already sent their Dragon spacecraft to the ISS, Orbital’s Cygnus will allow for more-diverse delivery capabilities.

“Congratulations to the teams at Orbital Sciences and NASA who worked hard to make this demonstration mission to the International Space Station an overwhelming success,” Bolden said. “We are delighted to now have two American companies able to resupply the station. U.S. innovation and inspiration have once again shown their great strength in the design and operation of a new generation of vehicles to carry cargo to our laboratory in space. Orbital’s success today is helping make NASA’s future exploration to farther destinations possible.”

Engineers will direct Cygnus to conduct a series of maneuvers which will guide the spacecraft toward its next destination – oblivion. As with almost all of the current fleet of vehicles that travel to ISS, Cygnus is expendable and will burn up in the Earth’s atmosphere tomorrow, Wednesday, October 23.

When it does so, it will wrap up a successful mission which started Sept. 18, when Cygnus thundered to orbit atop Orbital’s Antares rocket from Wallop Flight Facility’s Mid-Atlantic Regional Spaceport’s Pad-0A in Virginia.

Cygnus encountered data format mismatch issues on orbit, delaying a planned Sept. 22 arrival at the ISS. Orbital updated and then tested a software patch which solved the problem, allowing the Cygnus Orb-D1 mission to proceed. Cygnus arrived safely, was tested maneuvering and navigating around the ISS before being berthed to the outpost on Sept. 29.

Orbital is preparing to launch the next of its Cygnus spacecraft in December of this year. Photo Credit: Orbital

Under NASA’s COTS program Orbital developed, tested and built both the Antares launch vehicle and the Cygnus spacecraft. According to NASA, COTS is designed to:

“…initiatives, such as COTS, are helping to develop a robust U.S. commercial space transportation industry with the goal of achieving safe, reliable and cost-effective transportation to and from low-Earth orbit to meet the needs  of both commercial and government customers. NASA’s Commercial Crew Program also is working with commercial partners to enable the availability of U.S. commercial human spaceflight capabilities in the next few years.”

The ISS has supported crew in an unbroken line since Nov. 2000. With the end of the space shuttle program in 2011, NASA had lost the ability to send either crew or cargo to the station. Although neither Dragon nor Cygnus can match the capabilities of shuttle (both spacecraft could comfortably fit within one of the shuttle’s payload bays with room to spare), they have allowed the U.S. to deliver cargo without being dependent on another nation.

Besides Orbital’s Cygnus and SpaceX’s Dragon, there are three other cargo vessels that have been employed to send cargo to the ISS: Russia’s Progress, the European Space Agency’s Automated Transfer Vehicle or “ATV” and the Japanese Aerospace Exploration Agency’s HTV.

The Cygnus Orb-D1 was also known as the flight of the David G. Low, in honor of the Orbital executive and three-time space shuttle veteran, who passed away in March of 2008. Orbital plans to conduct the next Cygnus flight to the ISS in December.