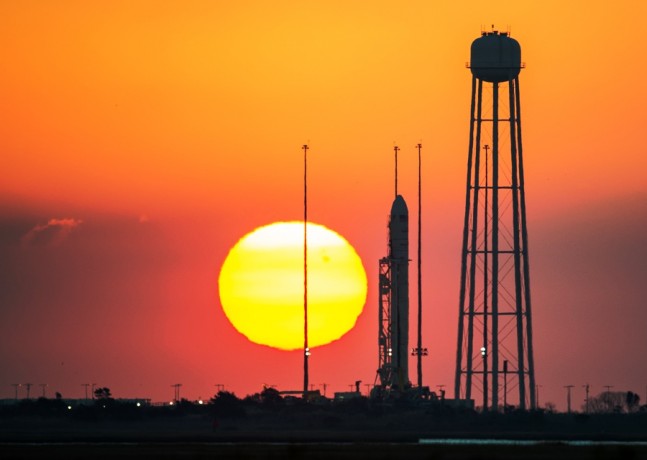 After minor delays, Orbital Sciences Corporation (Orbital) is set to launch one of the company’s Cygnus resupply spacecraft on Monday, Oct. 27 to deliver crew supplies and cargo to the International Space Station’s (ISS) Expedition 40. Monday’s launch is slated for 6:44 p.m. EDT (1844 GMT), providing only a 15 minute launch window at the Mid-Atlantic Regional Spaceport (MARS) launch site on Wallops Island, Virginia.

Monday’s launch will be a joint effort between Orbital Sciences and NASA to conduct the fourth of eight resupply flights in a series of on-going Commercial Resupply Services missions.

With Monday’s flight, and including a 2013 Commercial Orbital Transportation Services (COTS) demonstration flight for Cygnus, four of the soda can-shaped spacecraft that have traversed the void to deliver much-needed supplies to the space station.

Through the $1.9 billion agreement that Orbital Sciences has with NASA, the company has become one of two U.S. commercial aerospace firms able to deliver cargo to the astronauts aboard the orbiting laboratory. With the contract open for rebidding starting on Nov. 14, the CRS contract will be reopened for bidding.

At present, Orbital and Hawthorne, California-based Space Exploration Technologies (SpaceX ) are carrying out the resupply flights to the ISS under the first phase of the CRS contract. The third stage, with its ATK CASTOR 30 rocket engine are seen being integrated in this image. Photo Credit: Orbital / NASA

The upcoming Antares launch was confirmed after a series of minor delays that set the ORB-3 mission back from its original Oct. 20 launch date. The first delay was due to a decision to provide a few extra days for ground and space station pre-launch operations to be completed. Then, due to Hurricane Gonzalo’s path through an important Bermuda down-range tracking station, the date was moved to Oct. 27 to accommodate for damage assessment and potential repairs. Luckily, nothing was damaged and after reviewing the Bermuda station, it was confirmed that a Monday launch was still plausible.

“The Wallops range relies on the Bermuda downrange assets to track and maintain data communications with the Antares rocket during flight and ultimately to ensure public safety during launch operations,” said Steven Kremer, Chief of the Wallops Range and Mission Management Office.

Earlier in the week, the Cygnus cargo spacecraft was fully fueled, and mated with the Antares 130 launch vehicle. After the initial loading, the remaining time-sensitive cargo was also loaded into the spacecraft in the Horizontal Integration Facility (HIF) – bringing the payload weight to an estimated 5,000 lbs (2,268 kg).

NASA released a full cargo manifest for this month’s mission which includes the following: One of the larger items on the payload manifest is the relatively tiny 3U CubeSat, Arkyd 3 (A3), built and funded by private company, Planetary Resources (PRI). The mission of PRI is to explore space and aid in the mining of resources in space (including asteroids). The A3 CubeSat is a smaller, condense version of the larger, Arkyd-100 satellite, which includes telescope technology. Arkyd 3 stands as a early, small test of the Arkyd-100 technology that will later be flown to aid in PRI’s company objectives.

On Friday Oct. 24, after payload fairing encapsulation, Antares set off on its one mile-long journey from the Horizontal Integration Facility (HIF) at 4:45 p.m. EDT (2045 GMT) to Pad-0A. Yesterday, on Saturday Oct, 25, the Antares rocket was raised into its vertical position in preparation for flight. Monday’s launch will be a special one for space history enthusiasts, as Orbital has announced that the Cygnus for this mission will be named for the late NASA astronaut and U.S. Air Force pilot, Donald “Deke” K. Slayton.

One of the original Mercury 7 astronauts, Slayton also flew combat missions over Europe and Japan during World War II as a decorated pilot. The SS Deke Slayton, as the capsule has been named, is Orbital’s tribute to the astronaut’s leadership and contributions to America’s space program. After a long career with NASA, Slayton was named the president of Space Services Inc. of America (SSI), which was the forerunner to commercial spaceflight today. His company became the first to launch a privately-funded rocket into space on Sept. 9, 1982 with the flight of the Conestoga 1 rocket.

Orbital has a history of naming their spacecraft after astronauts and individuals who contributed to the United States’ commercial space program. Past Cygnus spacecrafts have been named in honor of Janice E. Voss, C. Gordon Fullerton, and G. David Low, who were all former NASA astronauts. The selection of Slayton is slightly unique, as Slayton, unlike the prior designees, had no professional connection to Orbital. The Cygnus spacecraft which will carry out the Orb-3 mission – has been named in honor of NASA astronaut “Deke” Slayton. Photo Credit: NASA

On Saturday, NASA released a statement that Antares and Cygnus should now be clear for a Monday launch attempt, with fair weather predicted for the flight. A 72 hour forecast suggests that there will be a 98 percent probability of acceptable weather conditions for launch. Weather will be monitored closely up until launch day should something change.

The launch sequence for Antares usually lasts about ten minutes from ignition to orbital insertion. Between these two events, Antares will shed its first stage, second stage, and payload fairing as on-board computers carefully place the SS Deke Slayton into its proper orbit.

Shortly after launch, those viewing the rocket from the vicinity of Wallops Flight Facility will be in for a special treat. The International Space Station is scheduled to be visible at about 6:49 p.m. EDT (2249 GMT), about 5 or so minutes after the rocket is ignited. The space station can be located at about a maximum height of 87 degrees and will be visible for a few minutes as it catches the reflected light of the Sun. Monday’s launch will be the first time that an Antares rocket has been launched at night. Photo Credit: Joshua Murray / NASA’s Wallops Flight Facility

Once Antares has successfully inserted Cygnus into orbit, the spacecraft will spend the next six days traveling to the station so as to ensure maximum schedule flexibility with other spacecraft operations at the complex. The Cygnus spacecraft is due to arrive, rendezvous and berth with the station early on the morning of Nov. 2. After almost a month’s visit, Cygnus is scheduled to depart from the ISS on Dec. 3 filled with materials to be discarded upon a fiery reentry into Earth’s atmosphere.

Even though Monday’s launch will be in Virginia, it will be visible along large stretches of the U.S. Eastern Seaboard. The launch should be able to be seen as far south as South Carolina up to Rhode Island. From various positions along the coast, viewers will be able to see both the first and second stage ignition of the Antares rocket. The early evening “twilight hour” is optimal for long-distance launch viewing.

Orbital Sciences has provided a detailed series of maps which can be used to locate the trajectory of the rocket in your area. The best areas for viewing will be on higher ground with darker skies, as close to the coastline as possible. Those interested in viewing the launch of Antares from a distance should check these maps as well as the weather for their viewing location.

The following map details the visibility of various phases of the launch along the U.S. Eastern Seaboard. Image Credit: NASA