Orbital Sciences’ Cygnus resupply to launch no earlier than January 7 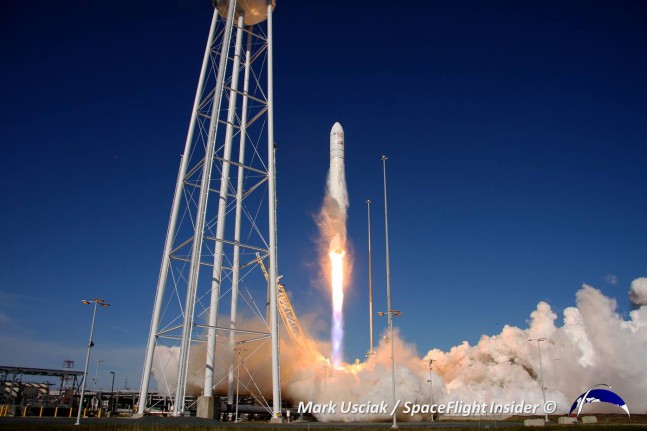 Antares and the Cygnus spacecraft launch to the ISS as part of the COTS Demo. Photo Credit: Mark Usciak / The Spaceflight Group

With the first of three spacewalks (EVAs) to fix a coolant pump aboard the International Space Station (ISS) set to commence tomorrow, NASA and Orbital Sciences Corporation have announced that the Antares rocket, carrying the Cygnus resupply spacecraft, will launch no-earlier-than (NET) Tuesday, January 7. The launch window is between 1:55 p.m. – 2:00 p.m. EST out of the Mid-Atlantic Regional Spaceport (MARS) with Cygnus’ berthing at the space station no-earlier-than January 10.

An Orbital Sciences mission update stated that “following the postponement of the originally targeted Dec. 19 launch, Orbital’s Antares team rolled the rocket off the launch pad and back to the Horizontal Integration Facility yesterday at Wallops. The time sensitive payloads that were on Cygnus are being removed today. They will be “refreshed” by the payload provider and returned for reloading into Cygnus. That operation would take place on Jan. 3. Roll-out to the launch pad would occur on Jan. 4 to meet a Jan. 7 launch.”

A NASA press release stated that “a conflict with a previously scheduled operation on the Wallops range has been resolved to allow the Antares launch to be proceed earlier than was originally thought possible after the decision was made to postpone the Dec. 19 launch attempt.”

Fixing the coolant pump will allow the astronauts aboard the space station to then focus on Cygnus’ arrival. The launch date will continue to be reviewed as NASA proceeds with each of the three spacewalks, which are slated for December 21, 23, and 25.

Please check back with The Spaceflight Group for updates regarding the approaching Antares launch.