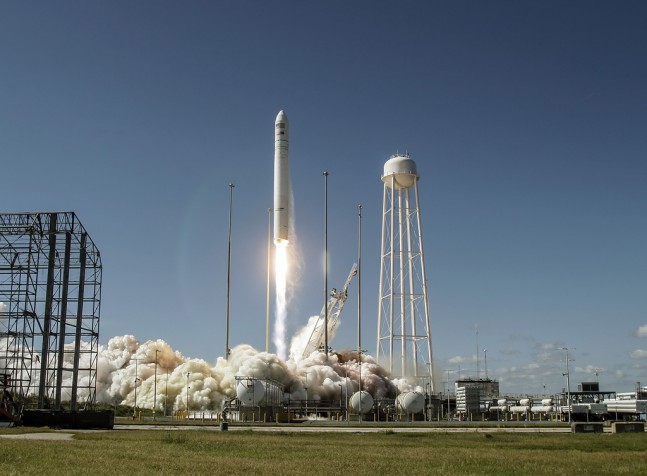 WALLOPS ISLAND, Va — Following successful spacewalks to fix a coolant pump issue aboard the International Space Station (ISS), Orbital Sciences Corporation and NASA are moving forward with the planned launch of Orbital’s Antares rocket and Cygnus (the C. Gordon Fullerton) resupply spacecraft on January 8. The launch window will only open for five minutes, extending from 1:32 – 1:37 pm EST (18:32 – 18:37 GMT) out of Pad-0A at the Mid-Atlantic Regional Spaceport (MARS), with Cygnus and its payload arriving at the station no earlier than Jan. 10.

The launch was delayed from its December 19 date to allow NASA Expedition 38 astronauts aboard the space station to perform a series of spacewalks to fix a coolant pump issue. The issue cropped up earlier in the month, on December 11, and was remedied by two spacewalks carried out by astronauts Rick Mastracchio and Mike Hopkins on December 21 and 25. The coolant pump was successfully replaced, allowing the astronauts to prepare for the arrival of Cygnus. This mission, dubbed “ORB-1,” is the first of eight planned missions by Orbital Sciences to deliver supplies – including experiments and provisions – to astronauts on board the orbiting laboratory. The ORB-1 mission follows the successful Commercial Orbital Transportation Services (COTS) demonstration flight conducted last September. With COTS completed, Orbital is now starting to carry out NASA’s Commercial Resupply Services (CRS) contract along with Space Exploration Technologies (SpaceX), which requires both of these companies to transport cargo to the crew aboard the space station. Cygnus being berthed with the Space Station back in September for the COTS demo flight. Photo Credit: NASA

“The cargo craft will be filled with 2,780 pounds of supplies for the station, including vital science experiments to expand the research capability of the Expedition 38 crew members aboard the orbiting laboratory, crew provisions, spare parts and experiment hardware. Also aboard the flight are 23 student experiments that will involve more than 10,000 students on the ground. These experiments will involve life sciences topics ranging from amoeba reproduction to calcium in the bones to salamanders,” stated a NASA release.

Prior to launch, the time-sensitive payloads will be “refreshed” by the payload provider and then returned to be reloaded into Cygnus on January 3. Following the refresh, the Antares rocket is due to be rolled out to the launch pad to secure the January 7 launch date.

With weather permitting, the launch will be visible to residents along the U.S. Eastern Seaboard, stretching from New York through North Carolina. Orbital Sciences has provided viewing maps for those interested in viewing the launch as well as detailed maps of the rocket’s trajectory.