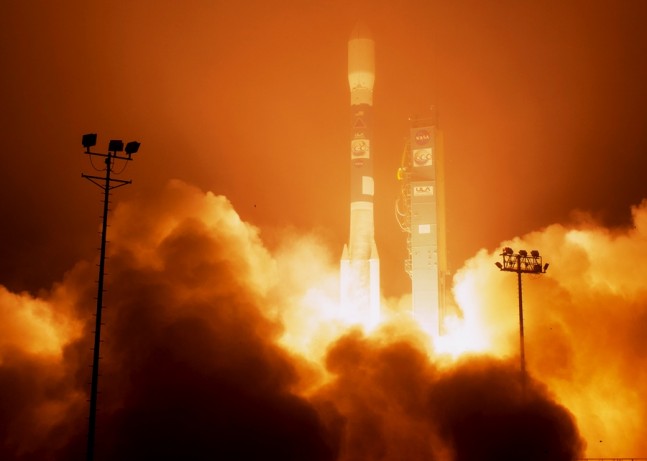 OCO-2 was originally planned to launch on Tuesday, July 1, but at T-46 seconds the flight was scrubbed due to a stuck valve on the sound suppression water system. NASA engineers had initiated water flow to the pad but quickly saw that there was no flow, so given the brief launch window, they had to scrub. The sound suppression system consists of large quantities of water washing over the pad to deaden intense sound waves from the rocket. The water system that did not operate was associated with a flame duct and sound suppression of that flame duct, and according to a NASA status report, an ineffective valve was the problem. Though it is widely assumed that this system is meant to retard the spread of flames associated with launch, in actuality it is employed to deaden the sound, which on its own is intense enough to destroy both the rocket and its satellite payload.

This time, everything was “go” before launch, including the pulse suppression water system. At 2:56 a.m. PDT (5:56 a.m. EDT), the main engine roared to life, the solid rocket boosters (SRBs) were lit, and the Delta II blasted off amid the California fog with OCO-2 aboard. This was ULA’s seventh launch of 2014 and their 84th launch since the company’s inception in 2006.

At 50 seconds in, the rocket reached Max-q, or maximum dynamic pressure. It’s the riskiest part of a rocket launch after liftoff as it puts the highest amount of stress on the airframe. Once it passed Max-q, atmospheric pressures on the rocket continued to decrease.

About 1 minute 10 seconds into the flight, the three ATK strap-on solid rocket boosters that helped get the rocket through the densest parts of the atmosphere burned out as planned. It was another 40 seconds before they separated to ensure they would drop safely into the water.

“The Delta II has a proven track record of delivering critical missions for its customers” said Blake Larson, Senior Vice President and President of ATK’s Aerospace Group. “Today’s launch showcases the breadth of ATK’s product line and the reliability that ensures mission success for our customers.”

Shortly after the three-minute mark, main engine cutoff (MECO) of the Rocketdyne RS-27 engine was successful, followed by vernier engine cutoff (VECO) of the LR-101 engines. Then the first stage separated and the AJ-10 engine on the second stage came to life for the first of two burns for the spacecraft to reach polar orbit.

Just over five minutes into the flight, the payload fairing was successfully jettisoned, causing a sigh of relief for those who remember the first OCO attempt on February 24, 2009. The original OCO was lost when the payload fairing of the Taurus rocket never separated. With the fairing, it was too heavy to reach orbit and it crashed into the Indian Ocean. This was however not how events played out early this morning.

Second engine cutoff (SECO) occurred at about 10 minutes and 40 seconds into the flight. The spacecraft coasted for 40 minutes before the very brief second burn of the AJ-10. Five minutes after that burn, the satellite separated from the second stage and began to fly on its own, as planned. At just over an hour into flight, it was confirmed that OCO-2 was sending data back to Earth. This is the first NASA mission dedicated to gathering data on atmospheric carbon dioxide, the greenhouse gas at the heart of the climate change debate. Such greenhouse gases are necessary for keeping enough of the sun’s heat in our atmosphere to sustain life, but there is widespread concern that use of fossil fuels and deforestation have been the cause of significantly higher carbon dioxide levels that in turn are causing global climate change.

“Climate change is the challenge of our generation,” said NASA Administrator Charles Bolden. “With OCO-2 and our existing fleet of satellites, NASA is uniquely qualified to take on the challenge of documenting and understanding these changes, predicting the ramifications, and sharing information about these changes for the benefit of society.”

The data gathered by this satellite should reveal both the Earth-based sources of carbon dioxide and the “sinks,” like oceans, plants and soils, where the carbon dioxide is naturally pulled from the atmosphere and stored. There is some concern about whether the carbon dioxide sinks will continue to do their job as more carbon dioxide is emitted over time, and how efficient they will be in the long term. OCO-2 should help answer such questions.

Additionally, OCO-2 will look at the solar-induced chlorophyll fluorescence, or the barely-visible “glow” of photosynthesizing plants. According to the NASA website, it’s “an indicator of the process by which plants convert light from the sun into chemical energy. As chlorophyll molecules absorb incoming radiation, some of the light is dissipated as heat, and some radiation is re-emitted at longer wavelengths as fluorescence.” Part of the reason for examining solar-induced fluorescence is that it gives immediate information about events that affect plant photosynthesis, such as droughts.

“In addition to OCO-2, NASA has selected ULA to launch three more Delta II rockets in the coming years. The Soil Moisture Active Passive (SMAP) mission will launch from Vandenberg Air Force Base later this year,” said ULA’s Vice President of Atlas and Delta Programs Jim Sponnick. “We look forward to working with NASA on the upcoming Delta II missions and other future launch campaigns.” NASA Administrator Charles Bolden was on hand Monday, July where he addressed members of the media about the importance of this mission. Photo Credit: Bill Ingalls / NASA

The OCO-2 satellite will detect both carbon dioxide and solar-induced fluorescence using one instrument with three high-resolution grating spectrometers, which measure different parts of the light spectrum. The instrument will measure the wavelengths (essentially the colors) of sunlight that carbon dioxide absorbs, and catch tiny differences in absorption between wavelengths by separating the light into many narrow wavelength bands.

The instrument is designed to collect 24 observations per second. Of the approximately one million soundings it should collect daily, about 100,000 are expected to produce truly usable data. Even tiny clouds compromise the data, and for this reason the satellite’s field of view is just about one square mile.

“Scientists currently don’t know exactly where and how Earth’s oceans and plants have absorbed more than half the carbon dioxide that human activities have emitted into our atmosphere since the beginning of the industrial era,” said David Crisp, OCO-2 science team leader at NASA’s Jet Propulsion Laboratory (JPL) in Pasadena, California. “Because of this we cannot predict precisely how these processes will operate in the future as climate changes. For society to better manage carbon dioxide levels in our atmosphere, we need to be able to measure the natural source and sink processes.” Most “viewers” never even saw the rocket leave the pad due to the thick fog which blanketed the region. Photo Credit: Bill Ingalls / NASA

The tight 30-second launch window ensured OCO-2 could correctly take its place in the Earth Observing System Afternoon Constellation, or the “A-Train,” a constellation of five other Earth-observing satellites that make near-simultaneous measurements. All of the A-Train satellites are spaced just a few minutes apart. If all goes as planned, OCO-2 will spend two years at the head of the A-Train, where it will circle the earth every 90 minutes.

“The countdown was extremely smooth, very quiet,” said NASA launch director Tim Dunn. “There was not a lot of chatter. We had no anomalies to discuss.” He added that the Delta II performed “like a champ.” Two more NASA missions are currently planned that will use the Delta II: the Soil Moisture Active Passive (SMAP) is set to be launched in October of 2014, and the Joint Polar Satellite System-1 (JPSS-1) spacecraft is set to launch in November of 2016.