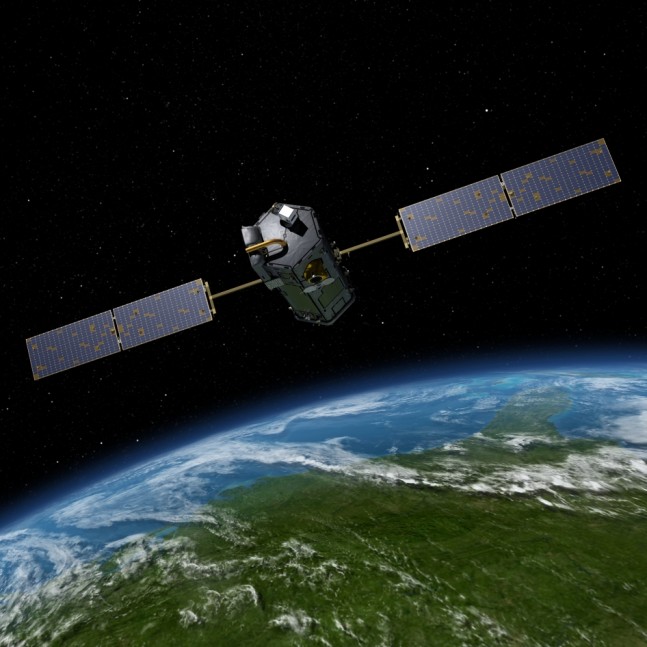 A little over a month ago, NASA’s Orbiting Carbon Observatory-2 (OCO-2) launched from Vandenberg Air Force Base to take the lead position in the International Afternoon Constellation of Earth-observing satellites, more commonly referred to as the “A-Train”. OCO-2 has the distinction of being the first spacecraft exclusively studying atmospheric carbon dioxide. Recently, the spacecraft recorded its first science data, indicating the vehicle’s science instrument is healthy. Launched from California’s Vandenberg Air Force Base on July 2, OCO-2 will provide scientists with the most accurate picture of global carbon dioxide sources and “sinks” (areas where  the gas is removed from the atmosphere). The orbiting observatory will also give researchers an idea of how the sinks and sources evolve.

After launch, OCO-2 performed a series of steps to ensure the vehicle was configured for in-flight operations. The mission control team established communications with the vehicle, stabilized its orientation and finally deployed its solar arrays. Once electrical power had been established, OCO-2’s systems were checked to ensure they were functioning nominally.

Over the past month, the vehicle performed a series of propulsive burns to maneuver it into its final orbital position, 438 miles (705 kilometers) up, in the lead position of the “A-Train“. As a multi-satellite “super observatory”, the A-Train designed to analyze conditions in the Earth’s atmosphere and surface environments. As a whole, it collects numerous nearly simultaneous weather, climate, oceanic and land measurements. OCO-2 leads the train with the Japanese GCOM-W1 satellite, and then by NASA’s Aqua, CALIPSO, CloudSat and Aura spacecraft following behind at 16-minute intervals.

After OCO-2 reached its final orbital position, the mission control team started the cooling process for the spacecraft’s science instrument — a three-spectrometer. The spectrometer needed to be cooled to operating temperatures, around 21 degrees Fahrenheit (-6 degrees Celsius), in order to limit the heat radiating from them as well as to focus the instrument. The detectors has to be cooled as well in order to maximize their sensitivity — to around -243 degrees Fahrenheit (-153 degrees Celsius).

On August 6, once the instrument’s system and detectors were brought to operating temperatures, the OCO-2 team recorded the observatory’s “first light”. As the vehicle flew over central Papua New Guinea, the data was transferred from the observatory to a ground station in Alaska, before being directed to NASA’s Goddard Space Flight Center for decoding and then on to NASA’s Jet Propulsion Laboratory. This first data collection enabled the team the opportunity to ensure OCO-2’s science instrument was functioning properly.

As OCO-2 orbits the Earth, sunlight is collected, with each spectrometer collecting one “frame” three times per second, totaling 9,000 frames every orbit. Each frame collected is divided into eight chemical signatures, called spectra, recording the amount of molecular oxygen or carbon dioxide over corresponding ground “footprints”. When converted into an image, the spectra appear as bar codes — the band of light are bright and separated by sharp dark lines. These lines indicate either molecular oxygen or carbon dioxide absorption. “The initial data from OCO-2 appear exactly as expected — the spectral lines are well resolved, sharp and deep,” said OCO-2 chief architect and calibration lead Randy Pollock of JPL. “We still have a lot of work to do to go from having a working instrument to having a well-calibrated and scientifically useful instrument, but this was an important milestone on this journey.”

The OCO-2 team will continue to perform a series of calibration techniques over the next few weeks, to fully test both the instrument and the observatory’s performance. During its mission, the OCO-2 will record up to one million science observations daily. The team expects to deliver spectra data to science community before the end of 2014. Carbon dioxide levels will be available for distribution in early 2015.

OCO-2 is a NASA Earth Science Pathfinder Program mission managed by JPL for NASA’s Science Mission Directorate in Washington. Orbital Sciences Corporation in Dulles, Virginia, built the spacecraft bus and provides mission operations under JPL’s leadership. The science instrument was built by JPL, based on the instrument design co-develo0ped for the original OCO mission by Hamilton Sundstrand in Pomona, California. NASA’s Launch Services Program at NASA’s Kennedy Space Center in Florida was responsible for launch management.