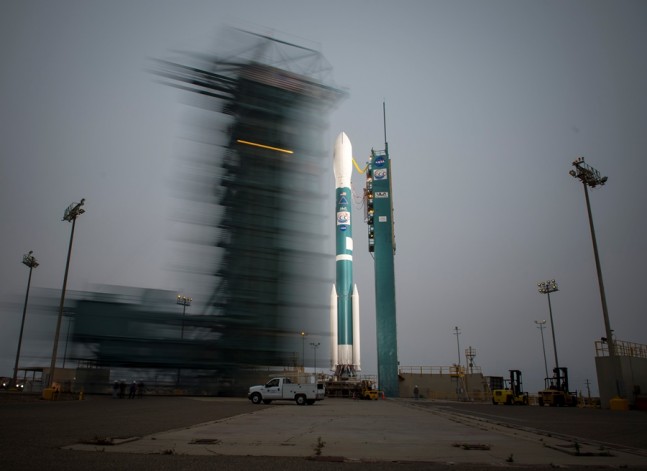 NASA and ULA scrubbed the July 1 launch attempt for OCO-2 due to issues with the launch pad. Photo Credit: Bill Ingalls / NASA

Those who didn’t wake up to watch the 2:56 a.m. PDT (5:56 a.m. EDT, 0956 GMT) launch of NASA’s Orbiting Carbon Observatory-2 (OCO-2) this morning can rest easy knowing they’ll get a second chance, as the launch was scrubbed due to a pad water flow issue.

With perfect weather at Vandenberg Air Force Base (VAFB)’s Space Launch Complex 2 (SLC-2) in California, and no technical concerns, NASA officials performed final checks and the rocket was switched to internal power. A hold wasn’t called until T-46 seconds, after they began the water flow to the pad and quickly saw that there was no flow. With just a 30-second launch window, the team of flight controllers had to call a scrub.

The sound suppression system consists of large quantities of water washing over the pad to deaden intense sound waves from the rocket. The water system that failed to operate this morning was associated with a flame duct and sound suppression of that flame duct, and apparently malfunctioned at the launch mount area, which is at the base of the rocket. While it is widely assumed that this system is meant to retard the spread of flames associated with launch, in actuality it is employed to deaden the sound, which is intense enough to destroy both the rocket and its precious cargo. There are only three Delta II launches remaining before the rocket is retired. Photo Credit: Bill Ingalls / NASA

NASA officials were required to remain at their posts until the United Launch Alliance (ULA ) Delta II rocket had been brought into a stable configuration. Once the vehicle is safe, a ground team will access the pad and determine the problem.

The earliest possible next launch attempt is 24 hours after this first try – at 2:56 a.m. PDT (5:56 a.m. EDT, 0956 GMT) Wednesday, July 2. Teams are assessing the issues with the sound suppression water system and whether that 24-hour recycle will be possible, or whether they will have to wait until Thursday.

NASA issued the following statement regarding today’s scrub. “Today’s scheduled launch of NASA’s Orbiting Carbon Observatory-2 (OCO-2) from Vandenberg Air Force Base in California was scrubbed because of a failure in the launch pad water flow. Managers are assessing the next launch opportunity.”

The tight 30-second launch window will help ensure OCO-2 correctly takes its place in the Earth Observing System Afternoon Constellation, or the “A-Train,” a fleet of five other Earth-observing satellites that make near-simultaneous measurements. All of the A-Train satellites are spaced just a few minutes apart. If all goes according to plan when the mission does launch, OCO-2 will spend two years at the head of the A-Train, where it will circle the earth every 90 minutes.

OCO-2 will replace the original OCO, which was launched on February 24, 2009 and subsequently lost as the payload fairing of the Taurus rocket never separated. With the fairing still in place, it was too heavy to reach orbit, re-entered the atmosphere, and crashed into the Indian Ocean. The launch vehicle which conducted the first OCO flight was one of Orbital Sciences Corporation’s Taurus-XL 3110 launch vehicles which took off from Vandenberg’s LC-576E.

The new satellite is nearly identical to the one that was lost. If it succeeds, it will be the first NASA mission dedicated to gathering data on atmospheric carbon dioxide, the greenhouse gas at the heart of the climate change debate. Such greenhouse gases are necessary for keeping enough of the sun’s heat in our atmosphere to sustain life, but there is widespread concern that use of fossil fuels and deforestation have been the cause of significantly higher carbon dioxide levels that in turn are causing global climate change.

Shortly after this morning’s scrub, United Launch Alliance issued the following statement to the media:

Vandenberg Air Force Base, Calif. (July 1, 2014) – The launch of a United Launch Alliance Delta II carrying NASA’s Orbiting Carbon Observatory-2 (OCO-2) satellite was scrubbed today due to an issue with the water suppression system that is used to flow water on the launch pad to dampen the acoustic energy during launch.

Pending the outcome of troubleshooting, the launch is rescheduled for Wednesday, July 2 from Space Launch Complex-2 at Vandenberg Air Force Base, Calif. The launch time is 2:56 a.m. PDT at the opening of a 30-second window. The forecast for July 2 shows a 100 percent chance of favorable weather conditions for the launch.