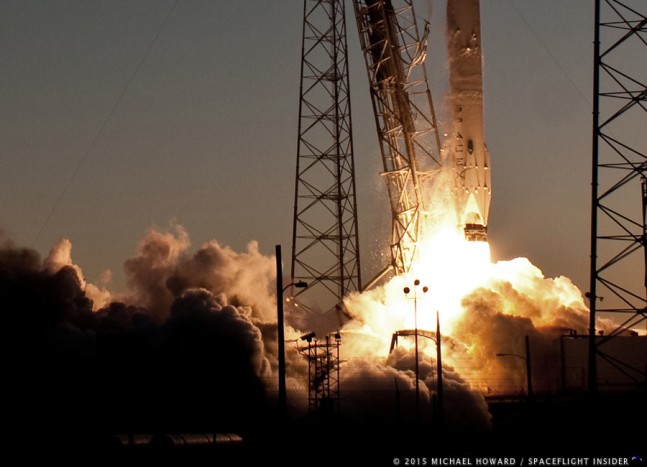 CAPE CANAVERL, Fla. — With this week’s launch of DSCOVR, officials from the National Oceanic and Atmospheric Administration (NOAA) have been at NASA’s Kennedy Space Center discussing space weather. NOAA now boasts 45,000 subscribers to their space weather alerts. Here are some facts for the budding space weather enthusiast.

Dr. Tom Berger, director of the NOAA Space Weather Prediction Center explains, “Disruption from magnetic storms is of primary concern to Electric companies in the northern latitudes. Because the magnetic particles are attracted to the Earth’s magnetic pole, and then radiate through the ground, electrical blackouts have occurred in Quebec and Sweden in the last 30 years. Airliners flying a polar route could lose electrical systems. There is a plan in place where astronauts on the International Space Station (ISS) could use the water storage on the ISS to build a bunker to protect themselves from a large solar storm. Pipeline operators notice that pipelines pick up currents in the ground.” Dr. Tom Berger talks to members of the media prior to the DSCOVR launch. Photo Credit: Jared Haworth/Spaceflight Insider

NOAA, along with partner agencies located in Germany, Japan, and Korea use data from SOHO, ACE, and DSCOVR to formulate real-time alerts about space weather. NOAA now has 45,000 subscribers to these alerts.

SpaceFlight Insider spent time with Dr. Tom Berger and Dr. John Grunsfeld, associate director of NASA’s Science Mission directorate this weekend. I asked about the 45,000 subscribers, “Given the small population of airline pilots, utility operators, and astronauts, why do you have 45,000 people interested in space weather?”

Berger explained, “Ham radio operators need to know about radio interference. Photographers interested in photographing the Aurora can use our alerts to know when there might be a high chance of the lights appearing. For many Americans, the local TV weather forecaster provides their daily dose of science with the weather report. Solar weather is an extension of that. We are seeing a growing number of ‘space weather enthusiasts’.”

To subscribe to the NOAA alerts, visit the Space Weather Prediction Center. The soon-to-be-launched DSCOVR satellite is just one facet of the solar weather detection system. The satellite will be 930,000 miles from Earth and always between the Earth and the Sun. It joins the 1997 Advanced Composition Explorer (ACE) satellite to serve as a “tsunami buoy” to let NOAA know that a solar storm is about to hit the Earth. The ACE satellite was originally designed to last five years. Now in its 17th year of service, it has enough fuel to last until 2023, according to Dr. John Grunsfeld, associate administrator of NASA’s Science Mission Directorate.

Grunsfeld explains, “ACE is in middle age. Once it got past all of the ‘childhood diseases’, we figure it will enjoy a long healthy life. Anything that could have gone wrong would have gone wrong by now. At this point, it should continue to serve until it runs out of fuel in 2023 or 2024.”

ACE is managed by NASA. The newly launched DSCOVR has identical monitoring systems and will be managed by NOAA. At this point, no one knows how long DSCOVR will function.

Berger: “There are a lot of variables. We might have to use fuel to make mid-course corrections on the way to L1 orbit. We won’t know how much fuel is left until the satellite reaches orbit. The remaining fuel will dictate how long DSCOVR will operate. The mission is designed for a minimum of two years and NOAS is hoping for five years.” During a call with Douglas Biesecker of NOAA, SpaceFlight Insider pressed for a definitive answer on the possible mission life of DSCOVR.

Biesecker explained that their models indicate it might last 7 years, which would have the satellite reaching the end of its life at about the same time as ACE.

“We are already thinking about what we need to do next.”

Besides ACE, the other aging satellite is the Solar & Heliospheric Observatory (SOHO). A cooperative effort between NASA and the European Space Agency (ESA), SOHO is the early warning system that detects Coronal Mass Ejections (CMEs) that can cause power outages. NOAA proposed adding a CME detector to DSCOVR, but had to abandon the idea in 2012 when there was no budget for a CME detector.

Biesecker explains, “By the time a solar event hits DSCOVR, NOAA will have already had advanced warning from SOHO. When SOHO detects a flare, we can tell the flare happened, but we can’t tell if is travelling directly towards us or directly away from us. ACE and DSCOVR, at 960,000 miles from the Earth confirm that the event is heading our way. With the magnetic disruption travelling anywhere from 1 million miles per hour to 5 million miles per hour, SOHO sees the eruption anywhere from 3 days to 18 hours before it is detected by DSCOVR. The commercial pilot who is flying over the north pole is relying on early warnings from SOHO and other ground-based system instead of DSCOVR. The 15-60 minute warning provided by DSCOVR does not give the pilot who is already over the pole time to react.”