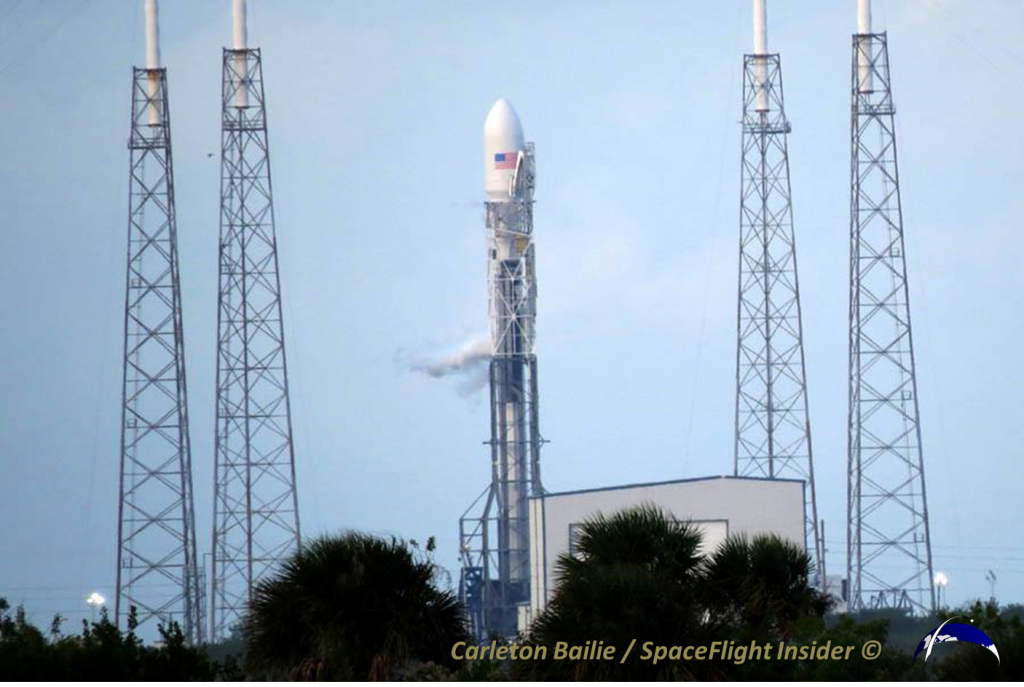 CAPE CANAVERAL, Fla — As the holds began to pile up, SpaceX decided discretion was the better part of valor and stood down attempts to launch the SES-8 communications satellite from Cape Canaveral Air Force Station’s Space Launch Complex 40 in Florida. Although windy and cold – weather was not the issue. Rather, technical issues crept in – and kept the first Cape Canaveral launch of the Falcon 9 v1.1 on lockdown. SpaceX founder, Elon Musk, attended the first launch attempt and could be seen inspecting the Navajo rocket on display in front of one of Cape Canaveral’s entrances. Photo Credit: Jason Rhian / SpaceFlight Insider

The first was an issue with a liquid oxygen valve in the rocket’s first stage, which saw the time slip from 5:37 p.m. – to 5:54 p.m. Then, when the countdown was resumed, the launch was halted until 6:30 p.m. due to the Falcon’s autosequencer calling for an abort as the vehicle was readying to be transitioned to internal power.

Then, on the third try – 3 minutes and 41 seconds before launch – another hold was called due to suspected issues with the first stage’s oxygen pressurization system. The 66-minute long launch window was coming to its close by this point, and SpaceX called it a day.

When the F9 takes to the skies – it will be the first commercial launch of the Falcon 9 v1.1 rocket from Cape Canaveral. The F9 v1.1 has upgraded Merlin 1D engines, stretched fuel tanks, and a payload fairing which uses a pneumatic system rather than one based on pyrotechnics to separate. Its payload, SES-8, is intended to be the first communications satellite to be sent by SpaceX into a geostationary orbit.

The satellite will provide a broader array of telecommunications capabilities to the South Asia and Indo-China markets upon its climb to orbit. It utilizes a Ka- and Ku-band system and was fabricated by the Orbital Sciences Corporation in Dulles, Virgina. This iteration of the F9 previously powered the CAscade, SmallSat and IOnospheric Polar Explorer (CASSIOPE) spacecraft to orbit on September 29 from Vandenberg Air Force Base’s Space Launch Complx 4. While the launch was successful, some issues were encountered during reentry tests, which were meant to gauge the reusable nature of the rocket’s first stage. SpaceX is hoping these issues will be rectified with this launch. Also the second stage did not reignite.

It was rumored the rocket’s second stage had exploded, sending a cloud of propellant around the upper stage (many orbital objects – more than expected – and a propellant cloud were visible to amateur stargazers).

“Following separation of the satellites to their correct orbit, the Falcon 9 second stage underwent a controlled venting of propellants (fuel and pressure were released from the tank) and the stage was successfully “safed.” During this process, it is possible insulation came off the fuel dome on the second stage and is the source of what some observers incorrectly interpreted as a rupture in the second stage. This material would be in several pieces and be reflective in the Space Track radar. It is also possible the debris came from the student satellite separation mechanisms onboard.”

The launch of SES-8 has been rescheduled to take place on Thanksgiving Thursday, November 28, at 5:38 p.m. EST. If all goes well, SpaceX will have much to be thankful for this Thanksgiving.