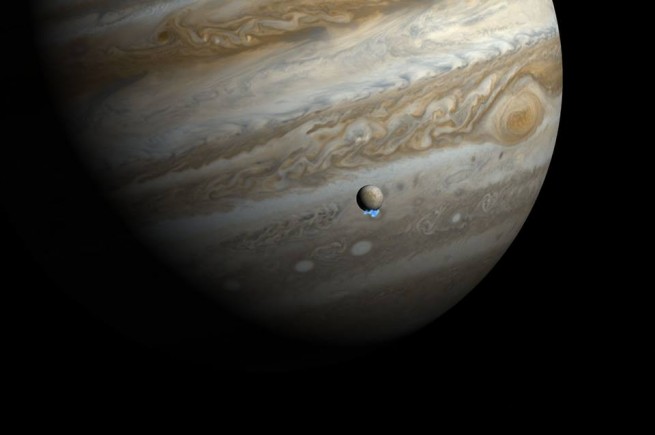 NASA and the European Space Agency have made several startling discoveries about the icy Jovian moon Europa. Image Credit: NASA/ESA

Europa has intrigued people for decades, ever since the first evidence was found that this small icy moon of Jupiter harbors a subsurface ocean. Additional information about the actual conditions below the surface have been difficult to obtain, since this ocean is covered by a global crust of ice perhaps ten of miles thick in places. But perseverance pays off, and now in just this past week there are two new significant discoveries being talked about – evidence from the Hubble Space Telescope for water vapor plumes, announced today, erupting from Europa’s surface similar to those on Saturn’s moon Enceladus, and the first detection of clay-type minerals on the surface, announced yesterday. Both of these findings are being discussed at the American Geophysical Union meeting this week in San Francisco; they are important for our understanding of Europa and the search life elsewhere for the reasons discussed below.

First, the plumes. They had been thought to possibly exist on Europa, but were not seen, until now. They were not photographed as such, but the water and oxygen ions in the water vapor from them was detected by Hubble as it was observing a faint aurora at the moon’s south pole. Jupiter’s strong magnetic field can split the water molecules in the plume into the separate kinds of ions.

How does this relate to Europa’s underground ocean? That discovery is exciting, as it opens up the possibility for life of some kind to exist there. Most of what we know about this ocean has come from NASA’s Voyager and Galileo missions as well as ground-based observations from telescopes on Earth.

These observations have provided important clues, but what is really needed is to be able to sample the water directly from the ocean itself. But when it is hidden below a thick shell of ice, that is not easy to do. Subsequent missions being planned would have orbiters or landers return to Europa to help answer these questions, but drilling through that ice would not be easy or cheap.

But thanks to the plumes, there may now be an easier way. Just like Cassini has already done at Enceladus, a probe could fly through them and sample them directly. Cassini has found water vapor, ice particles dust and organic material in Enceladus’ plumes. What would a close examination of Europa’s reveal? Illustration showing the area and extent of the detected water vapor in the plumes near Europa’s south pole. Image Credit: NASA/ESA/L. Roth/SWRI/University of Cologne

As lead author Lorenz Roth of the Southwest Research Institute in San Antonio, Texas stated, “The discovery that water vapor is ejected near the south pole strengthens Europa’s position as the top candidate for potential habitability. However, we do not know yet if these plumes are connected to subsurface liquid water or not.”

It isn’t known yet for sure if the plumes are directly connected to the ocean below, but it seems likely, as they apparently behave similar to the ones on Enceladus. On both moons, they emanate from near the south pole. On Enceladus, they erupt through long, deep fissures called tiger stripes. Europa has similar cracks all over its surface. Also like Enceladus, the plumes appear to vary in intensity, having only been detected so far when the moon is farthest from Jupiter, suggesting that gravitational tidal forces put stress on surface fractures in the icy crust. When farthest from Jupiter, the cracks open up, allowing the water vapor to escape, and then close up again when closest to Jupiter.

It also is not known yet if this is one big plume, or a bunch of smaller ones close together. The erupting water vapor reaches an altitude of at least 125 miles (201 kilometers).

According to another team member, Kurt Retherford, also of the Southwest Research Institute, “the plume variability supports a key prediction that we should see this kind of tidal effect if there is a subsurface ocean on Europa.”

There’s also the other reason – the clay-type minerals. They hadn’t been detected on Europa’s surface before, until now. Organic compounds such as clays are the building blocks of life as we know it, and are common throughout the solar system and beyond. They can be found in comets and asteroids, which spread them throughout the solar system including to planets and moons by impacts. It was expected that they should be on Europa’s surface as well. As Jim Shirley, a research scientist at NASA’s Jet Propulsion Laboratory, Pasadena, Calif., explained:

“Organic materials, which are important building blocks for life, are often found in comets and primitive asteroids. Finding the rocky residues of this comet crash on Europa’s surface may open up a new chapter in the story of the search for life on Europa.”

The new discovery seems to support this idea. The clay-type minerals called phyllosilicates were found in near-infrared images taken by the Galileo probe back in 1998. These older images are of lower resolution than what we have today, but by applying new techniques, Shirley and his colleagues were able to tweak out the clay signature. The minerals are in a broken ring about 25 miles (40 kilometers) in diameter, about 75 miles (120 kilometers) away from the center of a 20-mile (30-kilometer) diameter central crater site. This fits in nicely with the impact scenario.

It is probably more likely than the minerals coming up to the surface from below, because of the thick ice shell. But, as the plume discovery now shows, there may be a connection after all between the surface and the water deep below. Perhaps incoming organic material could also make its way below the surface to the ocean (or smaller lakes which are now thought to exist within Europa’s crust). Europa already has heat and water deep down, and the ocean bottom is thought to be in contact with rock just like on Earth, which could provide mineral energy sources for life. Any additional organic material available could make things even more interesting.

“Understanding Europa’s composition is key to deciphering its history and its potential habitability,” said Bob Pappalardo of JPL, the pre-project scientist for a proposed mission to Europa. “It will take a future spacecraft mission to Europa to pin down the specifics of its chemistry and the implications for this moon hosting life.”

The published paper about the plumes is available here.