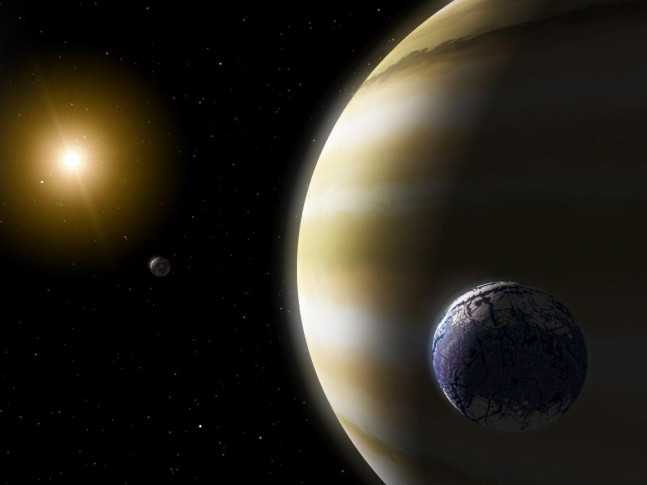 Artist's conception of exomoons orbiting an alien gas giant planet. Some exomoons, like the largest one shown here, may even be Earth-like in some ways or at least habitable. Image Credit: NASA

Exoplanets orbiting distant stars are now being discovered in the thousands, with a new discovery made almost every week now. But what about exomoons? In our own solar system, moons far outnumber planets, so it should be considered likely that many of those other planets out there would also have moons. The problem is size; moons tend to be much smaller than planets in most cases, so detecting them orbiting such far away worlds is very difficult. Thankfully, however, technology is now at the point where just such detections should begin to be possible. A new technique how now been proposed that could allow astronomers to bring exomoons from theoretical concepts to reality.

Previous techniques being tried could realistically only detect moons which were several times the mass of the largest moon in our solar system, Ganymede. The new technique however, discussed in a study to be published in The Astrophysical Journal, could find smaller moons typically found in our solar system by using a unique eclipsing effect of moons when viewed against the background radiance of their host stars. Techniques which might have been able to detect exomoons – would have required that the natural satellites be larger than the largest moon in our solar system – Ganymede. Photo Credit: NASA

As study author René Heller, a postdoctoral fellow in astronomy at McMaster University, in Ontario, Canada explained, “This technique is the first method that has been demonstrated to allow detection of moons akin to those in the Solar System. Four hundred years after Galileo Galilei discovered four moons orbiting Jupiter, the first moons we knew of besides our moon, we now have the technologies and methods available to go find ‘alien’ moons beyond our Solar System.”

The new technique is called the orbital sampling effect, where a moon could be viewed orbiting its planet edge-on as a transit, similar to how a planet transits in front of its star when the orbit is seen edge-on. If many multiple “snapshots” of the moon in orbit are taken, the shadows of the transits will tend to overlap more at the outer edges of the moon’s orbit, making them darker and easier to detect in these “wingtips.” For the technique to work, many orbits of the moon must be observed over some period of time.

A couple of other bonuses are that the technique should be able to detect multi-moon systems as well as being able to find evidence for them in data from the Kepler space telescope which astronomers already have access to, instead of having to wait and rely on future, more powerful space telescopes. Such new telescopes are being planned and designed, such as the James Webb Space Telescope and TESS, but TESS won’t be launched until 2017 and JWST won’t be launched until 2018. Any possibility of being able to find exomoons before then would of course be a good thing and an exciting prospect. “Such observations have already been taken by Kepler, and they are publicly accessible,” said Heller. “So there’s no need to wait for future technology.”

While all of the exoplanet discoveries are exciting, especially for those hoping to find evidence of extraterrestrial life, exomoons might be just as tantalizing, perhaps even more so in some ways. As we have found with several moons now in our solar system, such smaller worlds can still have oceans. Cold, icy moons like Europa, Enceladus, Titan, Ganymede and Callisto are all thought to have subsurface oceans in one form or another. How many exomoons out there might have similar conditions? Some may be able to sustain even more life-supporting conditions.

The vast numbers of exoplanets being discovered already suggests that exomoons should also be common. New advanced techniques such as this as well as other future missions should be able to confirm this in the not-too-distant future.

The search for, and expected discoveries, of moons orbiting distant alien worlds is one of the most exciting things being done in astronomy today. Heller sums up his personal approach as such:

“This paper was not planned to serve my own ambitions towards an exomoon detection. But if someone uses this new effect to find a moon outside the Solar System, I’d feel flattered.”