New meteor-impact crater on Mars is largest ever found 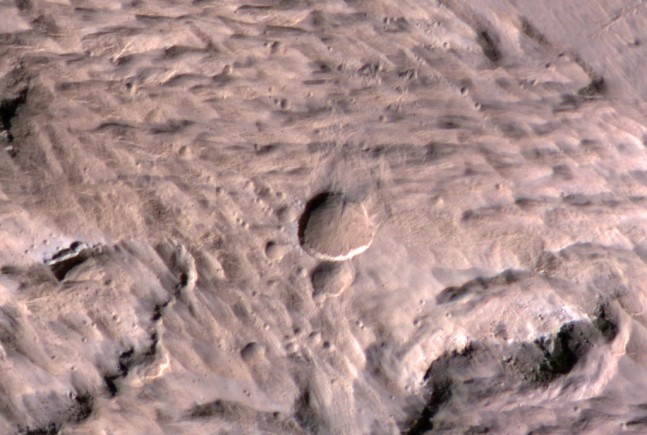 Image of the largest fresh crater ever seen on Mars, taken by the Mars Reconnaissance Orbiter. Smaller craters nearby may be due to secondary impacts of smaller pieces of rocky meteorites. Photo Credit: NASA/JPL-Caltech/Univ. of Arizona

Newly-formed, fresh meteor craters have been found on the planet Mars before, but a new one seen by the cameras on NASA’s Mars Reconnaissance Orbiter (MRO) is the largest ever seen so far.

The crater, near the Martian equator was first seen in images taken on March 28, 2012. It was not there the day before. First noticed as a darkened spot in the images, the crater was seen in images taken by the spacecraft’s weather-monitoring camera (or Weathercam), the Mars Color Imager (MARCI) and is about half the size of a football field. MARCI takes daily images of the Martian surface, and the new crater was noticed only about two months ago, by Bruce Cantor, deputy principal investigator at Malin Space Science Systems which built MARCI. At first glance, it looked like a dark spot, similar to other fresh impact scars seen before.

As Cantor explained, “It wasn’t what I was looking for. I was doing my usual weather monitoring and something caught my eye. It looked unusual, with rays emanating from a central spot.”

Before and after images from the Context Camera (CTX) showing the location of the newly-formed Martian crater. The left image is from January 16, 2012 and the left one is from April 6, 2014. Image Credit: NASA/JPL-Caltech/MSSS

The dark spot was intriguing, but how old was it? By checking dates on many different pecking images of the same location, Cantor was able to deduce that the crater was not there on March 27, 2012, but was there on March 28, 2012. He had pinpointed the time when this new crater formed.

Better images would also be needed to verify that it was indeed an impact crater, which were then taken by the High Resolution Imaging Science Experiment (HiRISE) and Context Camera (CTX) cameras on MRO.  They revealed not only the main crater itself,  but also more than a dozen smaller crater near it, which may have been created by secondary impacts of smaller pieces of debris during the main impact. During the past seven years, the CTX camera has imaged almost the entire surface of Mars. The original Weathercam image from the Mars Color Imager (MARCI) camera showing the “dark spot” which turned out to be the new impact crater. Image Credit: NASA/JPL-Caltech/MSSS

In some ways this new crater is a little different though. “The biggest crater is unusual, quite shallow compared to other fresh craters we have observed,” said HiRISE Principal Investigator Alfred McEwen of the University of Arizona, Tucson.

Apart from being interesting to look at, such craters on Mars can provide clues to material underground as well as impact rates of meteorites on the planet.

As Leslie Tamppari, deputy project scientist for the Mars Reconnaissance Orbiter mission at NASA’s Jet Propulsion Laboratory explained, “Studies of fresh impact craters on Mars yield valuable information about impact rates and about subsurface material exposed by the excavations. The combination of HiRISE and CTX has found and examined many of them, and now MARCI’s daily coverage has given great precision about when a significant impact occurred.”

It is much more common to see such newly-formed craters on Mars (or the Moon), where there is much less atmosphere to burn up any incoming space rocks before they hit the ground. Just like Mars and the Moon, meteorites are constantly raining down, although most are very tiny and the only reason earth doesn’t look as pockmarked is being of its atmosphere and highly active erosional processes.