New Horizons mission less than one year from Pluto 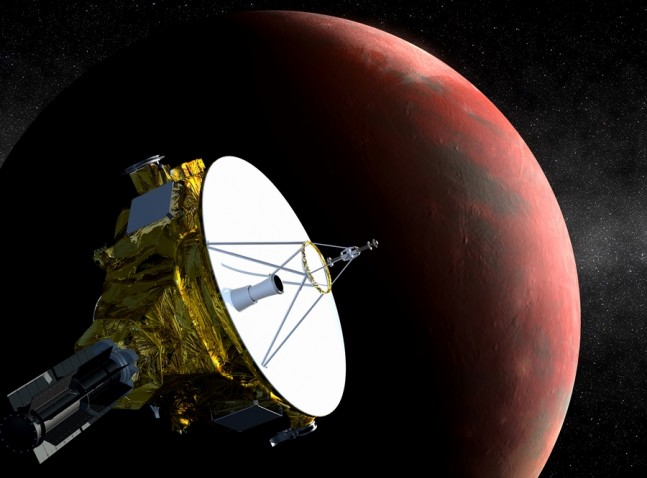 NASA's New Horizons spacecraft has woken up from hibernation for the last time. Image Credit: NASA

July 14 marked exactly one year until the New Horizons mission will conduct  the Pluto system, inaugurating the “Year of Pluto.” At a two-day quarterly Science Team Meeting, held at the Johns Hopkins University Applied Physics Lab in Laurel, MD, mission staff celebrated with a “P Minus One” reception on Tuesday evening.

Even though it will not be seen up close for a year, the Pluto system is receiving interest by the media. There have been calls for a reconsideration of Pluto’s planetary status in light of the fact that it has five known moons and an atmosphere that never completely disappears during its 248-year solar orbit. NASA posted marking that the New Horizons spacecraft is within a year of its primary target. Image Credit: NASA

David Eicher, editor of Astronomy magazine, publicly called for a debate between Stern and Dr. Neil deGrasse Tyson, director of the Hayden Planetarium at New York’s American Museum of Natural History. Astronomy offered to host the debate and engage its readers throughout the process. Eicher’s statement echoed a challenge Stern issued Tyson several weeks ago for a debate on the subject of planet definition. Tyson turned down the offer.

Launched on January 19, 2006, New Horizons has been traveling eight-and-a-half years and recently crossed Pluto’s perihelion, the planet’s closest point to the Sun in its elliptical orbit. Mission team members now describe the probe as being “in Pluto space.”

Mission team members conducted a minor course correction of the probe on July 14, speeding it up approximately 2.4 miles per hour. Without this maneuver, New Horizons would arrive at the Pluto system 36 minutes later than planned for next year’s encounter.

Describing the burn as “flawless,” Stern said, “You could say that New Horizons just lit a little candle for its one year out anniversary.”

This was the sixth course correction since New Horizons’ launch. It used up only a quarter of a kilogram of fuel, less than half of one percent of the 53 kilograms of fuel still onboard.

Still searching for a Kuiper Belt Object to visit after Pluto, the New Horizons team was awarded 160 hours of observing time on the Hubble Space Telescope after a trial 40-orbit period in June turned up two potential targets. This was after ground-based telescopes failed to find a target Kuiper Belt Object in New Horizons’ trajectory. The VB-SDC was constructed by students at the University of Colorado as well as other academic institutions.

Together, these instruments will be employed to carry out the mission’s primary objectives, which include mapping the surfaces of both Pluto and its largest moon Charon, characterizing the geology of these two objects, characterizing Pluto’s tenuous atmosphere and determining the rate at which it is escaping, searching for an atmosphere on Charon, mapping surface temperatures on both Pluto and Charon, and searching for rings and additional moons in the system. Having long left the Sun’s warm embrace, New Horizons is fueled by a radioisotope thermoelectric generator (RTG). New Horizon’s power source can be seen here in the foreground, with the spacecraft itself in the background. Photo Credit: NASA

New Horizons has an additional goal of the mission will be to conduct similar studies of one or more Kuiper Belt Objects beyond Pluto.

The duration of the flyby has been divided into seven distinct phases, three approach phases, three departure phases, and the near-encounter phase.

Approach Phase 1 begins in January and runs through early April. Approach Phase 2, which runs from early April through mid-June is when New Horizons will first send back photos of the Pluto system better than those taken by the Hubble Space Telescope. Approach Phase 3 goes from mid-June to one day before the encounter.

The Near Encounter Phase is short, from one day before closest approach to one day after. At this point, the spacecraft will be gathering the most detailed information related to the goals above.

Because so much of the spacecraft’s power upon approach is being used to gather information, the entirety of the data it collects will be take another year to be returned to Earth.

An impressive share! I have just forwarded this onto a friend who has been conducting
a little research on this. And he actually ordered me breakfast due to
the fact that I discovered it for him… lol. So allow me to reword this….
Thanks for the meal!! But yeah, thanks for spending time
to discuss this topic here on your internet site.