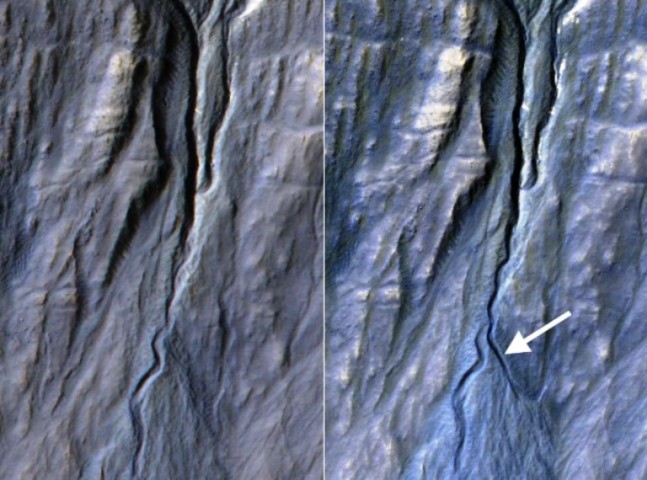 Before and after images showing the formation of a new gully channel in Terra Sirenum, taken between Nov. 5, 2010 and May 25, 2013. Image Credit: NASA/JPL-Caltech / Univ. of Arizona

Some of the most interesting features on the surface of Mars are its gullies, often found on crater walls or other slopes, first seen from orbit back in 2000. They resemble gullies on Earth created by water, but the origin of located on Mars have become the subject of much debate. These gullies appear to be actively forming today, and are not just some relic of past activity that took place millions of years ago. But on Mars, water can’t exist for long on the surface even if it is briny, so how are these gullies being created? New observations from the Mars Reconnaissance Orbiter (MRO) spacecraft suggest that dry ice (frozen carbon dioxide) may actually be responsible. The new findings have been published in the journal Icarus.

According to Colin Dundas, lead author of the new paper from the U.S. Geological Survey’s Astrogeology Science Center, “As recently as five years ago, I thought the gullies on Mars indicated activity of liquid water. We were able to get many more observations, and as we started to see more activity and pin down the timing of gully formation and change, we saw that the activity occurs in winter.” Gullies in a total of 356 sites were used in the study, going back to 2006. New, active gully formation was recorded in 38 of those locations. It was already known that carbon dioxide frost and ice is common on Mars, as is water frost and ice, and the observation that the gullies seemed to be active in winter, during periods of the carbon dioxide frost occurring and when temperatures would be too low for even briny liquid water. It is theorized that carbon dioxide frost sublimates as a gas which then lubricates the dry slope material, causing it to flow downhill. Accumulating weight from seasonal frost deposits may also cause similar gullies. An example of dark slope streaks, or recurring slope lineae, which are more likely to be formed by briny liquid water. Photo Credit: NASA/JPL-Caltech

“Much of the information we have about gully formation, and other active processes, comes from the longevity of MRO and other orbiters,” said Serina Diniega of NASA’s Jet Propulsion Laboratory and co-author of the new study. “This allows us to make repeated observations of sites to examine surface changes over time.”

Frozen carbon dioxide is also thought to be active in the form of gas geysers at the poles and another type of gully caused by chunks of the dry ice sliding downhill on sand dunes.

It should be noted that while these types of gullies likely don’t involve any liquid water, there are other types of smaller gullies where water is considered to be the most likely factor in their formation. There are also the intriguing dark slope streaks, known as recurring slope lineae, which appear to be caused by briny water running down slopes in the warmer Martian months.

These particular gullies not being created by flowing water should not be disappointing though.

“I like that Mars can still surprise us,” Dundas said. “Martian gullies are fascinating features that allow us to investigate a process we just don’t see on Earth.”

Another upcoming special issue of Icarus will highlight some of these other kinds of gullies and streaks which do appear to provide strong evidence for liquid water on Mars today.