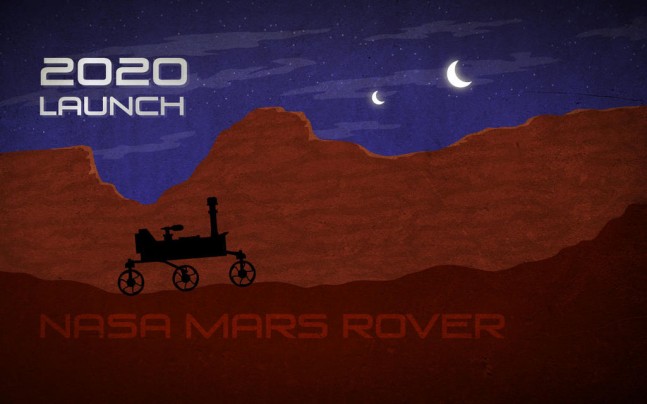 By all measures, NASA’s Mars Science Laboratory (MSL) rover, Curiosity, has been a phenomenal success. It should come as no surprise then that when NASA started looking at the next wheeled robot that it wanted to send to the Red Planet – that it would base it off of the MSL design. The rover, which for now is simply called, the 2020 Mars Rover, has only been briefly described by the space agency. However, what clues have been given about its abilities and characteristics offer a tantalizing glimpse into future.

NASA’s Mars Program Planning Group has been stated as one of the guiding influences behind the decision to build yet another rover and that it be based on Curiosity’s design. The way that Curiosity was developed and built lent itself to being utilized as a template for future rovers. The reason for this bit of forethought is readily understandable given the current economic environment.

As with most everything these days, NASA is concerned about the cost of its missions. One of the largest factors in planetary missions is the expense of development. In an effort to limit development costs, NASA decided that, if it isn’t broke – why fix it? As such, they opted to use the proven design of MSL. NASA even had some spare components leftover from Curiosity’s construction.

There will be some differences between the two rovers however, primarily in the instruments that the robot will carry with it. As the Mars 2020 rover will be following in the footsteps of Curiosity, it will have new questions to seek answers to, fresh investigations that it has to conduct. The landing system, however, will be very familiar to MSL fans. Both the acclaimed sky crane rocket as well as the heat shield will be virtually the same as those employed on MSL. If all goes according to plan, the Mars 2020 rover will follow up on the discoveries that its predecessor, Curiosity, is currently making on the surface of Mars. Photo Credit: NASA / JPL-Caltech/MSSS

As for the types of experiments which will be part of the rover’s backpack – NASA is working on what those might be. The U.S. space agency announced an open competition for scientists in the planetary community to submit proposals for what instruments the Mars 2020 rover will bring with it.

In January 2013, a Science Definition Team was selected by the space agency so as to define what the objectives of the Mars 2020 rover mission would be. It was composed of 19 scientists and engineers from a wide range of organizations and research facilities. They were, in essence, the ones who would develop the rover’s core mission keeping in mind that it must achieve several high-priority scientific goals and that one of those was to aid in the accomplishment of sending crew to the Red Planet in the 2030s as directed by President Obama.

NASA has stated that the Mars 2020 rover’s primary mission will be to determine whether-or-not the Red Planet is a possible habitat for life, that is will seek out past evidence life existed there and it will collect specimens for a potential sample-return flight to Earth. Most intriguingly perhaps is that NASA has stated the rover will also demonstrate technologies which could enable future human exploration missions to Mars. How this will be accomplished is unclear.

“The Mars 2020 mission will provide a unique capability to address the major questions of habitability and life in the solar system,” said Jim Green, director of NASA’s Planetary Science Division. “The science conducted by the rover’s instruments also would expand our knowledge of Mars and provide the context needed to make wise decisions about whether to return any collected samples to Earth.” At this early stage, much of what the Mars 2020 rover’s mission has yet to be determined. Image Credit: NASA / JPL-Caltech

Whatever mission requirements that the 2020 Mars Rover is assigned, one thing is clear – the Mars 2020 did not reach its destination without a wealth of experience in conducting Mars rover operations. When the 2020 Mars Rover sets down on the dusty Martian surface, it will follow a growing line of those that came before her. Starting with the 1993 Mars Pathfinder mission which was the first rover to be sent to the Red Planet. Then the “twin” Mars Exploration Rovers, Spirit and Opportunity which landed back in 2004 – each of which far exceeded their design parameters (in fact, Opportunity is continuing to explore Mars to this very day). Finally, in August of 2012, Curiosity began her journey of discovery at Gusev Crater.

“For many folks last summer was an incredible ride, seven minutes of terror to get Curiosity, the Mars Science Laboratory on the surface of Mars,” said NASA astronaut and the space agency’s current Associate Administrator for the agency’s Science Mission Directorate, John Grunsfeld. “The year after has been an incredible drive – even though we are still on our way to Mount Sharp. We still have a fundamental question to answer and it is one that has piqued the curiosity of astronomers and planetary scientists for quite a while of, did Mars ever have an environment that was habitable for life – is there or has there ever been life on Mars? Does Mars support life now?”

The question of whether-or-not Mars ever been able to support life was, at least in a microbial sense, was the key mission for the Mars Science laboratory. It was one that Grunsfeld said harkens back to the very first landers to successfully touch down on Mars. Curiosity will serve as the basic template that the Mars 2020 rover will be based off of. Photo Credit: Jason Rhian / SpaceFlight Insider

“Back when I was in High School in the 1970s we sent the Viking landers to answer that question, and it was very exciting, very challenging – these were grand voyages,” Grunsfeld added. “However, from these missions, Mars appeared to be somewhat lifeless – but the question remained – did Mars ever have an environment that was potentially habitable for life?”

That question has come into increasingly sharper focus since the Viking landers touched down in 1976. For a long time afterward, Mars faded from the scientific consciousness as the data gleaned from the spacecraft that had traveled to the Red Planet suggested that it was a lifeless world and one which was unlikely to have supported life in its past. However, with the uptick in missions and interest in Mars that began in the 1990s, it has become increasingly clear that Mars was not always as we see it today. The 2020 Mars Rover will serve to deepen our knowledge of the planet’s history.

What Curiosity has done, is, essentially, lay another layer of understanding about the forces which have shaped the Red Planet. One of these elements in particular, the Martian atmosphere, will come into sharper focus next year with the arrival of NASA’s Mars Atmosphere and Volatile EvolutioN arrives at Mars. It will look into how Mars’ atmosphere has been shaped throughout the planet’s life. The 2020 Mars Rover will doubtlessly continue the narrative that began with Viking and could redefine how we view the Red Planet and its history.

This article was originally published in The Mars Society’s The Mars Quarterly.