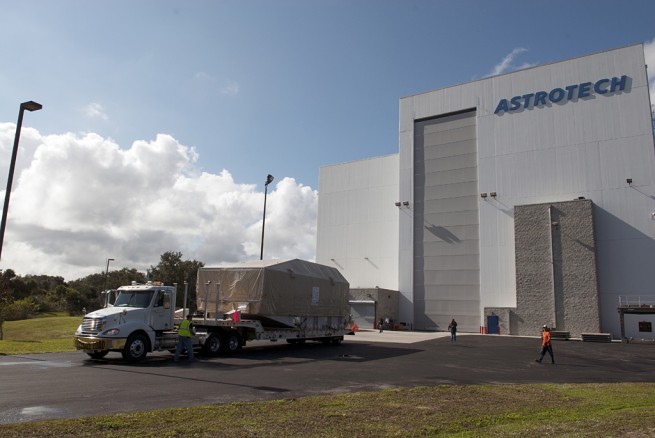 The newest from NASA’s anticipated trio of Tracking and Data Relay Satellites (TDRS) arrived at Kennedy Space Center on December 6, awaiting its attachment to United Launch Alliance (ULA) Atlas V rocket. The Atlas V is slated to take the TDRS-L into earth orbit on January 23, 2014. The satellite arrived last week on an Air Force C-17 aircraft from Boeing’s Space and Intelligence Systems satellite factory in El Segundo, California. The three planned TDRS (K, L, and M) are a result of a contract Boeing Space Systems was awarded in December 2007 to build them. TDRS-K, launched on January 30, 2013, will be followed by TDRS-L almost a year later and TDRS-M planned for as early as 2015.

According to the official TDRS website, the “TDRS Project is providing follow-on and replacement spacecraft necessary to maintain and expand the Space Network. The TDRS Project, established in 1973, is responsible for the development, launch, and on-orbit test and calibration of TDRS spacecraft.”

The upcoming launch of TDRS-L will continue the mission of expanding the Space Network, which “consists of the on-orbit telecommunications TDRS satellites, placed in geosynchronous orbit, and the associated TDRS ground stations, located in White Sands, New Mexico and Guam. The TDRS constellation is capable of providing nearly continuous high bandwidth (S, Ku, and Ka band) telecommunications services for expandable launch vehicles and user spacecraft in low Earth orbit.”

Additionally, the TDRS-L spacecraft will be the 12th TDRS satellite launched to date, where only eight are still in operation. Two have been retired, while one was lost in a space shuttle accident. Four of the remaining eleven in operation are already beyond their design life, however.

The TDRS-L will remain at its temporary home at Kennedy Space Center until launch day.