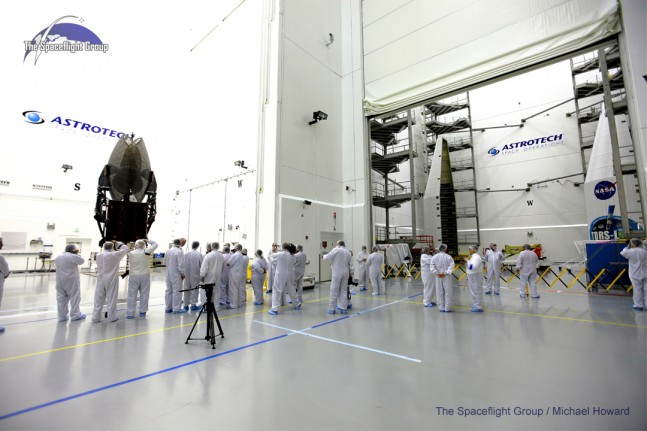 NASA's next TDRS spacecraft was shown to the media today, Jan. 3, 2014 as part of the lead up to its launch, currently scheduled to take place on Jan. 23. Photo Credit: Mike Howard / SpaceFlight Insider

TITUSVILLE, Fla — NASA’s Tracking and Data Relay Satellite L (TDRS-L) was on display today. The spacecraft, which is currently scheduled to launch atop a United Launch Alliance (ULA) Atlas V 401 rocket later this month, sat pristine in a cleanroom located at the Astrotech Space Operations facility in Titusville, Florida. The viewing opportunity highlighted that a mere three weeks remain before the satellite’s mission begins. NASA officials from NASA’s Goddard Space Flight Center located in Greenbelt, Md.; NASA’s Launch Services Program (LSP) which is located at the space agency’s Kennedy Space Center in Florida; and United Launch Alliance (ULA) were on hand to describe the importance of having this spacecraft enter into NASA’s TDRS fleet.

If all goes according to plan, TDRS-L will ride the venerable Atlas V launch vehicle aloft at 9:05 p.m. EST (although ULA has 40 minutes in the launch window to get the rocket off the pad and on its way) on Jan. 23. Once in geosynchronous orbit, TDRS-L will become known as TDRS-12. This series of communications satellites celebrated its thirtieth year of operations in 2013; the first TDRS satellite (TDRS-1) was deployed during STS-6 on space shuttle Challenger’s first mission, in April 1983.

According to a Goddard Space Flight Center web page, the TDRS program was established in 1973. Its goal was to provide continuous communications with critical low-Earth-orbit (LEO) missions with less reliance on international ground stations. At the time, the space shuttle was in its developmental beginnings. Eleven of these satellites have been launched over the course of the past thirty years. They have been instrumental in NASA’s crewed space efforts, such as the shuttle program and the International Space Station (ISS) as well as NASA’s robotic missions such as the Hubble Space Telescope.

With the launch of TDRS-L, two of the three planned next-generation satellites will have been placed aloft. They are meant to provide operational continuity to the space agency’s TDRS constellation. As of now, eight TDRS satellites are above the Earth in a geostationary orbit. These satellites provide critical telemetry, tracking, high bandwidth data return and other services to NASA’s efforts. “A lot of NASA’s robotic missions relay their scientific data to TDRS which is then transmitted down to White Sands and it is then sent to wherever the wherever the scientific research center for that particular mission is,” said NASA’s Deputy Program Manager for TDRS, Paul Buchanan. “More importantly, these newer TDRS satellites have a greater capability in terms of bandwidth than legacy spacecraft.”

The first of the next-generation Boeing TDRS satellites, TDRS-11 (known as TDRS-K prior to commencing operations), was launched nearly one year ago in January 31, 2013, from Launch Complex 41 at Cape Canaveral Air Force Station (CCAFS). TDRS-M, the third of this series of Boeing-made satellites, is scheduled to be launched in December 2015, and will be known as TDRS-13. NASA has worked to ensure that the 30-year-old program has been modernized over the years.

A NASA-issued release stated that TDRS-L employs a high performance solar panel providing more power to the spacecraft so that it can handle the increasing S-band communications requirements placed on it.

“Essentially TDRS’ H, I and J are the same as K, L and M from a performance standpoint, but the reliability of the newer spacecraft is better as the technology has advanced,” Buchanan said. These new TDRS satellites were built by Boeing Space and Intelligence Systems located in El Segundo, California. TDRS-L is managed by  NASA’s Space Communications and Navigation Program, part of the Human Exploration and Operations Mission Directorate located at NASA Headquarters in Washington. The spacecraft’s launch management will be handled by the space agency’s Launch Services Program who will be use the Atlas  V provided by ULA.

For its part, NASA seems pleased with the performance that the newer spacecraft have started to provide.

“Since we took possession of TDRS-K in August of 2013, we have had about three or four months of on-orbit testing. TDRS-K is currently over the Pacific Ocean at about 150 degrees longitude and it is operational. From what I have been told at the Space Network at Goddard is that it is performing flawlessly,” Buchanan concluded looking up at the spacecraft.