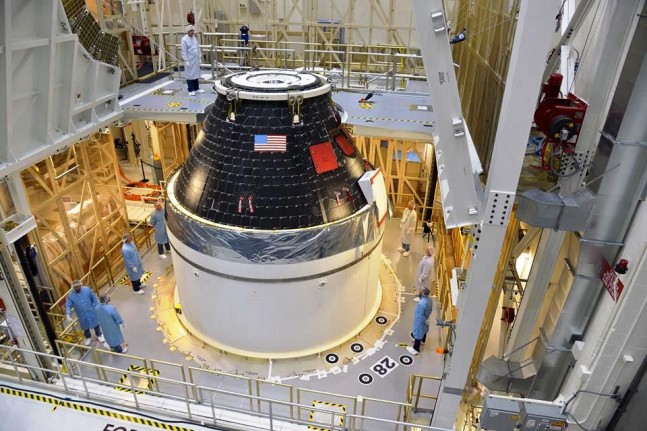 CAPE CANAVERAL, Fla — Before its scheduled test flight in December of this year, NASA has released the first photo of a fully constructed Orion Multi Purpose Crew Vehicle capsule being serviced at the Neil Armstrong Operations and Checkout Facility located at NASA’s Kennedy Space Center in Florida.

The Crew and Service module will be moved on Wednesday morning to the Payload Hazardous Servicing Facility before the launch abort system (LAS) is added. When this task is completed, the spacecraft will be ready to be placed on top of the United Launch Alliance Delta IV Heavy rocket for the Exploration Flight Test-1 in December. Orion is expected to travel an estimated 3,600 miles above Earth, father than any spacecraft built to carry human beings in the last forty years.

Please can someone explain to me why NASA has spend billions on a private crew transportation contest between Boeing, SNC, and SpaceX and is at the same time busy with its own billion dollar crew capsule? Do we really need 4 different crew transportation spacecraft? Am I the only one to find this odd?

Ok, I will answer my own question after watching the video presentation of the orion capsule. They are building the orion capsule as a small test version for a larger version that could bring humans to mars. It will fly crew no sooner than 2021, since they/nasa wants to thoroughly test it for such a bold mission. So it’s kind of a science test vehicle in preperation for a mars mission. We are looking at 2026 to 2030 before NASA is thinking of sending humans into deep space. Hence the commercial competition to provide human access to space in a much shorter timeframe. Which, by the way is an overwhelming success since it delivered three viable crew vehicles in only three years.

That is what I’m thinking.. Before the Apollo program there was Project Gemini.

ToMars,
It’s not odd, you’re just wrong. Likely only one of the three CCP spacecraft will be tapped to fly to LEO. They aren’t capable of carrying out deep space missions – Orion is.

Orion has to have much more hardened systems to carry out missions past LEO. Which, BTW, will likely take place in 2021-2023 – not 2026-2030. Not sure what pro-NewSpace blog you got that off of – but you might want to stop going there as it’s obviously inaccurate.

Also, none of the three commercial craft have even flown yet – where do you get they are an “overwhelming success” – maybe they will be – and maybe they won’t.

Infidel is spot on. These are two completely different types of missions. Commercial crew is low earth orbit and SLS or Orion is deep space, no comparison what so ever.
Your also spot on with this so called success that some blogs seem to be promoting, especially when it comes to Elon who they think is some kinda god.

Elon is no god, but his mission is to mars.

Would Musk haters/loathers have the same opinion of another foreign-born American space guru, Werhner von Braun, had the internet been around way back then? I actually like Orion (and Dragon V2 for CCP) and hope it works as advertised.