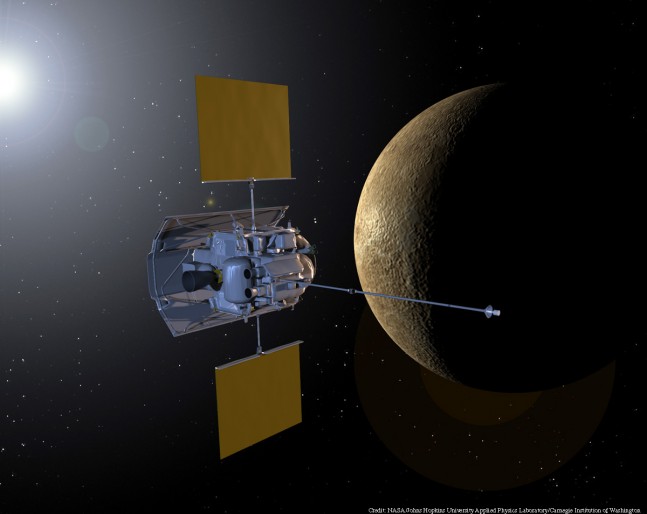 After more than 10 years in space and nearly four years orbiting the planet Mercury, NASA’s MESSENGER mission will soon draw to a close.  The spacecraft’s propellent supply is running low and it will eventually crash into the surface of Mercury. On Jan. 21, MESSENGER will fire its thrusters in a 120-second burst which will boost it up to an altitude of 50 miles (80 kilometers).  Before that happens, MESSENGER will descend to an altitude of 16 miles (25 kilometers), closer than ever to the planet’s surface, subjecting it to heat extreme enough to melt the solder of some of its scientific instruments.While MESSENGER’s sun shade is designed to withstand temperatures up to 350 degrees Celsius, The

Surface of Mercury will radiate heat back onto the shaded instruments.  When MESSENGER’s Altitude dips below 26 kilometers, the shaded area will warm up to 185 degrees Celsius and the solder will begin to melt.

“When we designed the vehicle, we of course knew what temperature the [solder] melted at, but we weren’t anticipating operating this long, and at these low altitudes,” said MESSENGER engineer Dan O’Shaughnessy. Infographic of the MESSENGER spacecraft’s accomplishments during 10 years in space. Image Credit: NASA

During MESSENGER’s close approach of Mercury, the spacecraft will get an unprecedented view of the planet’s cratered surface and collect data on its gravity field, surface makeup and the contents of its craters.

MESSENGER was originally expected to impact on the surface of Mercury in late March but engineers believe they have found a way to extend the mission by as much as a month. The strategy would exploit the gaseous helium used to pressurize the spacecrafts propellent tanks. The gas can be used to make small corrections to MESSENGER’s trajectory.

“The team continues to find inventive ways to keep MESSENGER going, all while providing an unprecedented vantage point for studying Mercury,” said  Stewart Bushman, lead propulsion engineer for the mission. “To my knowledge this is the first time that helium pressurant has been intentionally used as a cold-gas propellant through hydrazine thrusters. These engines are not optimized to use pressurized gas as a propellant source. They have flow restrictors and orifices for hydrazine that reduce the feed pressure, hampering performance compared with actual cold-gas engines, which are little more than valves with a nozzle.”

MESSENGER’s eventual crash site is uncertain due to Mercury’s uneven gravity. It is likely to land on the planet’s far side, where it will be out of site until the European Space Agency’s BepiColombo mission arrives in 2024.

The MESSENGER team is commemorating the mission’s end with a public contest to named five craters on Mercury after any writer, composer or artist that has been famous for at least fifty years and deceased for at least three. You enter the contest, which ends on Jan. 15, by going here.

MESSENGER is an acronym for MErcury Surface, Space ENvironment. GEochemistry, And Ranging.  The MESSENGER Spacecraft was launched on August 3, 2004 atop a Delta II rocket from Cape Canaveral Air Force Station. It is only the second spacecraft to visit Mercury and the first one to orbit it.  The Mariner 10 spacecraft fly by Mercury three times in 1974 and 1975. This article was written using information from New Scientist and the MESSENGER Mission website.

Surely this is a typo.